Can a ship tow during warp?

If an item can't be stored in a hold, can a ship use a tractor beam to tow another item or ship during warp?

I'm thinking of the case where, perhaps by design or through battle damage, the saucer section cannot be reattached to the rest of the ship. Without its own warp drive the saucer section would be required to make its way to a suitable repair/docking facility without warp drive unless there's a way to tow it, or reattach it firmly enough that it can withstand the forces it would have to endure during the trip.

According to this memory alpha

Tractor beams were generally only used at sub-warp velocities. To safely tow a vessel at warp speed, the target vessel's engines had to be deactivated to avoid shearing forces against towing vessel. A tractor beam could be used at warp speed only if both vessels' speeds were exactly matched. (TNG: "Final Mission", "The Emissary")

This matches my own memory on the issue, essentially to tow at warp, the other ship needs to be pulled into the first ships warp field.

The Borg also have far more advanced tractor capabilities, and are seen using their tractor beam at warp multiple times.

Borg vessels also had the capability of holding starships securely while traveling at warp speed. They also had the ability to utilize tractor beams at warp velocities. (TNG: "Q Who"; DS9: "Emissary"; VOY: "Scorpion")

According to the wikia, there are examples of both Federation and Borg vessels doing this:

The First Federation vessel Fesarius was capable of towing a Constitution-class vessel at high warp for prolonged periods without stressing the hull of the target ship. (TOS: "The Corbomite Maneuver") Borg vessels also had the capability of holding starships securely while traveling at warp speed. (VOY: "Scorpion, Part II")

I've never seen the TOS episode, but I've seen that Voyager episode a few times. The Borg pretty much drag Voyager at warp speed. I'm trying to find a video of it online but no luck as of yet...

I recommend watching Voyager: Scorpion parts I and II, they're probably the best episodes of Voyager anyway.

It would seem so, based on de-facto evidence in the various series. I would like to also use as evidence the line spoken by Kirk in 'The Doomsday Machine', where he tells Commodore Decker that they would take the Constellation "in tow". Given the immense time needed to cover distances under impulse power, as we understand it, then it would be a given that the Enterprise could tow the Constellation at warp speed.

In the Star Trek: Ongoing (#43) comic serial, we see the Enterprise being towed at warp by another vessel. 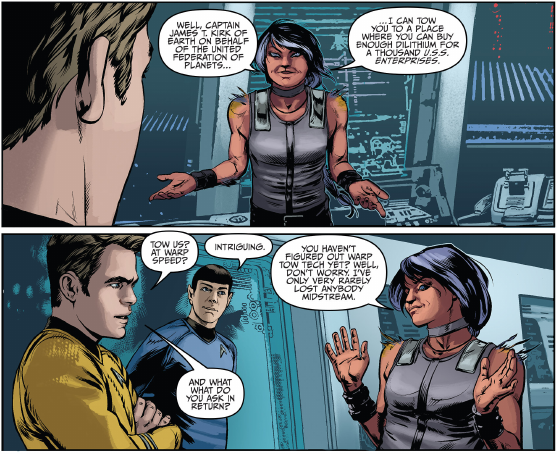 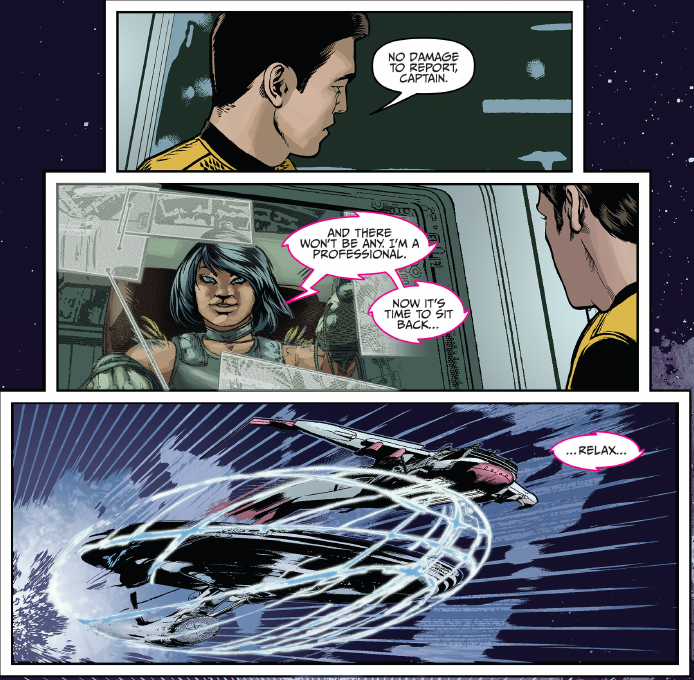 Yes, otherwise it would take years to tug the vessel back to starbase or friendly space. During the Dominion War, a Federation tug was utilized in the evacuation of disabled vessels from a battle zone. The USS Fredrickson was towed under such circumstances.

33
Warp 13… Was this overlooked?
6
When and why was impulse drive invented?
24
Can a non-warp capable ship travel at light speed by tucking in close to a warp capable ship?
5
Can Calamarain Clouds go into warp?
11
Why would the Kazon value water?
17
How far would a ship travel during 123 days at warp 9.5?
16
Can a holographic warp core breach destroy a real ship?
27
Why did the Enterprise not have any HAZMAT suits?