Apologies if this is best suited for "Movies & TV", but the plot elements of the movie seem to fit "Fantasy" pretty well.

This movie was available to stream on Netflix a few years ago.
It was a low budget indie film that revolved around the premise of the struggle between light and darkness (almost literally).
The good guys of the story are "angels" of sorts who behave similar to a pixie-style balls of light when travelling, but otherwise take on a human form.
The bad guys are manifestations of shadows and darkness. I vaguely remember them having an Agent Smith style appearance, but their glasses/faces were made of white noise.
The movie had a heavy focus on free-running / hand-to-hand combat.

The main protagonist/antagonist (whose name I think is the title of the movie) is a troll-like creature who wears reaper-esque robes and hides his face. His task is to abduct this little girl and deliver her to white noise bad guys.

The conclusion of the movie involves the robed creature turning on his masters and choosing to save the little girl. In the end it is revealed that

he is actually the little girl's single father who was transformed into this creature because of his guilt (or something) involving a traumatic experience (likely involving the mother).

This movie is Ink

The "angels" are know as storytellers and the movie features a group of them trying to protected a young girl named Emma from a troll like creature called Ink.

The Agent Smith like people are known as Incubi and you can see there static glasses in this image: 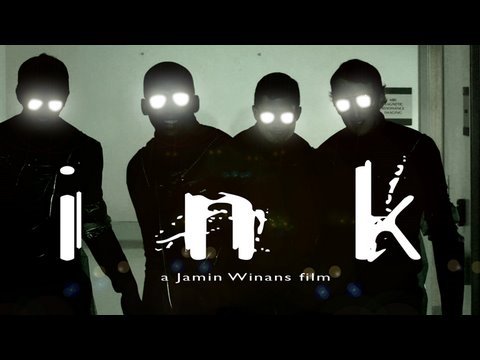 It is revealed at the end of the movie that Ink is actually a version of Emma's father from an alternate future.

10
Anime about a cop with a robot partner and a rampaging tank
6
Identify this horror movie: Couple trapped in a petrol station / black spikey creature
6
Movie from the 90s where the superhero gets the strength from the galaxy
1
Movie about little bad monsters
11
Guy eats something and a creature comes out of his belly and flies away
13
An animated sci-fi movie with a fully armoured antagonist and a pale looking child