OK, OK, so that title's a bit provocative, but take a look at xkcd #413, and tell me you don't immediately think "Randall Munroe invented BB-8 before BB-8 was invented!" 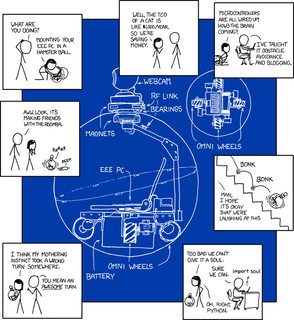 Seriously, though: has anyone "official" at Disney credited or even mentioned xkcd and/or Randall Munroe (the writer of the webcomic) in relation to BB-8? What about at Sphero (which is the company which has been credited with giving Disney the idea for BB-8)?

(Answering the question "Did Disney or Sphero give Randall credit", not the title question, which is probably unanswerable).

First, what was Randall's innovation? It was not putting a robot inside a ball. Here's a patent for a robotic ball filed June 15, 2000, eight years before the comic publication date. His innovation was figuring out how to attach peripherals to the outside of the ball, using magnets. This was the thing that OP suspects Disney copied for BB-8.

Considering that Sphero filed a patent for this "MAGNETICALLY COUPLED ACCESSORY FOR A SELF-PROPELLED DEVICE", they are not giving Randall credit, otherwise they would not have filed a patent, or would at least would have included him in the list of inventors.

I have personally talked with Randall Monroe about this.

The question you ask is a bit hard to answer because you have to ask what "based off of" actually means.

Was XKCD the first to introduce to the world the concept of a robot? Obviously not.

Was XKCD the first to introduce to the world the concept of a robot in a ball? No

Was XKCD the first to introduce to the world the concept of a robot in a ball using omniwheels? I would argue yes. Randall has also told me yes.

The summer of 2008 is when the patent holder first started working on BB8! This is only several months after Randall's comic was published. Do you think the comic may have had some part in the design?

As is the case with many inventions I believe everyone borrowed from each other. Although, the fact that the Disney's patent holder started work on BB8 after the comic was published, I am going to guess that BB8's engineers looked at the comic and it influenced the design.

I hope this best answers the question.

According to StarWars.com, Abrams envisioned the early design by himself.

When it came time to create a new astromech droid for the first film of a new Star Wars trilogy, director J.J. Abrams started as anyone might: he made a sketch on a napkin. It’s a fitting beginning, considering the handmade, warm look and feel of Star Wars: The Force Awakens. The sketch was basic — two circles atop one another, with a tiny dot for an eye — but the core concept was there. And it was powerful enough to get the proverbial ball rolling for Lucasfilm concept designer Christian Alzmann. “J.J. wanted something rolling on a sphere, so I tried a lot of different designs developing that idea,” Alzmann says. “He would give direction on the kinds of shapes to use, and that led to a personality for the droid. Of course, the original sketch had very pleasing, round shapes, so you kind of figured it wasn’t going to be a very serious or angry character. Ultimately, BB-8 developed out of a back-and-forth process with J.J. where he gave feedback on each iteration of the design.”

The December 2015 issue of the magazine Popular Science gives the same story.

Popular Science: How was BB-8 conceived?

TFA Senior Animatronic Designer Josh Lee: It was J.J.'s idea. We first saw it as a sketch on a napkin that had been scanned and emailed over to us.

We can't prove that this is true, but there isn't really any reason to assume it isn't.

Not the answer you're looking for? Browse other questions tagged star-wars the-force-awakens inspiration bb-8 xkcd or ask your own question.

31
Who is Gilderoy Lockhart based on?
3
How Many New Official Canon Books are there?
10
What's different about the new X-Wing fighters?
3
What's different about the new TIE fighters?
16
Was Luke Skywalker based on George Lucas?
5
What is the resistance transport based on?
3
Is Ryder Azadi based on Ryder Windham?
41
Were any Star Wars aliens based on national stereotypes?
4
How close was Starkiller Base to the New Republic capital?
11
Was Fenoglio based on any real author?