Who was in the cantina band in The Force Awakens?

When Han and company walked into Maz's cantina style bar, I was really hoping to see these guys from Episode IV playing: 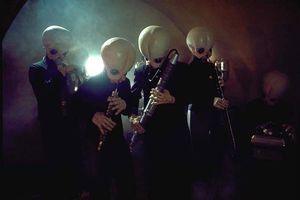 But sadly, it was a different band - who were they?

No, I didn't make the names up. Here's proof:

Visual dictionary doesn't offer many (or any :) details on them, except that they don't seem to be a permanent house band.

42
Is there any in-universe reason for a stormtrooper to use a melee weapon against Finn?
7
Were the criminals really after the money?
31
Did Obi-Wan ever pay Han Solo? If so, where did he get the money?
12
Was it a mistake that the X-Wings in The Force Awakens were waiting in hyperspace?
31
Why did Ponda Baba and Doctor Evazan in the cantina dislike Luke so much?
8
Does the piece of music being played by Figrin D'an and the Modal Nodes have an in-universe name?
13
Blaster policy in the Mos Eisley Cantina?
12
Why didn't Obi-Wan use the Force in the Cantina?