I'm trying to find a fantasy novel that is set in an alternative medieval, alpine Europe

The plot involves a beer or lager being continuously brewed and tapped at various heights in the vat. the bottom level has special powers. The wilds outside the towns are inhabited by mythical creatures.

It's "The Drawing of the Dark" by Tim Powers. 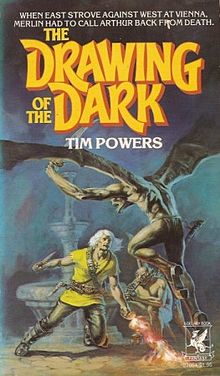 From the Wikipedia entry:

The year is 1529, and Brian Duffy, a world-weary Irish mercenary soldier, is hired in Venice by the mysterious Aurelianus to go to Vienna and work as a bouncer at the Zimmerman Inn, former monastery and current brewery of the famous Herzwesten beer.

As it turns out, Aurelianus knows more about Duffy and his past than Duffy himself knows, and his real purpose in hiring him is to protect the hidden Fisher King, secret spiritual leader of the western world, and to defend him and the West against the Turkish advance. And the real reason that Vienna must not be captured by the Turks is that it is the site of the Herzwesten brewery. Its light and bock beers are famous throughout Europe, but the dark beer, produced only every seven hundred years, has supernatural properties and must not be allowed to fall into enemy hands.

Not the answer you're looking for? Browse other questions tagged story-identification alternate-history or ask your own question.

3
Medieval samurai traveling in Europe, with fantasy creatures
19
Trying to remember the title of a fantasy teenage aimed novel I read in the mid-1990s
9
Fantasy novel where characters have gemstones implanted in their bodies. Female baddie is trying to 'harvest' them
7
Looking for short story about alternate reality inside "the computer", with a cloud city on an icy plain
6
Book where spells have to be grounded so they don't go wild
9
I'm trying to identify a sci-fi graphic novel set underwater