Why did C-3PO not have a red arm at the end of The Force Awakens?

Towards the end of the movie, as the crew of the Falcon are taking off to follow the map, the Resistance gathers to wave goodbye. Taking the image from this question: 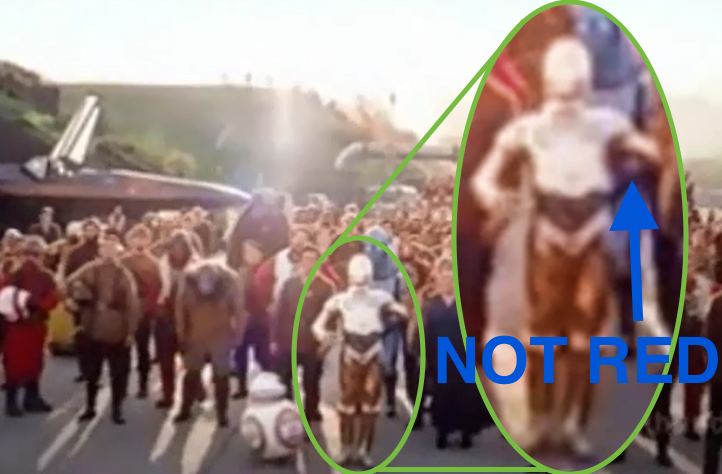 While this image doesn't show it well, after seeing the movie 3 times, I'm positive that C-3PO no longer has his red arm and instead is fully gold again. When did C-3PO get his arm fixed and if this answer is correct in it being a memento, why did he get it fixed?

It was replaced. We don't know why or how, yet, but the WGA script explicitly notes that:

EXT. D'QAR - DAY
The Millennium Falcon RISES.
Leia, with Poe, BB-8, and C-3PO (with his proper arm replaced), watches the next generation of Jedi begin her journey.

We know it was replaced AFTER the attack on Tacodana:

C-3PO
Goodness! Han Solo! It is I, SeeThreepio!
(sees Han, stops)
You probably don't recognize me because of the red arm.
(sees Leia, increasingly awkward)
Look who it is! Did you see who?
Oh. Excuse me, Prin-- uh, General.
Sorry. Come along, BB-8. Quickly.
(BB-8 beeps)
Yes, I must get my proper arm reinstalled.

Please note that the red arm clearly wasn't there because it was the best functional choice: Visual Dictionary says:

“C-3PO is uncharacteristically quiet when it comes to discussing his salvaged arm; it is a memento of another droid's sacrifice,”

Of course, the real reason is that now, Disney can sell twice the C-3PO centric (or even C-3PO involving) merchandise.

As I just saw the movie: Threepio, after Maz Kanata's place on Takodana has been attacked and he arrives together with Leia, mentions, after of course ignoring all human bondings and emotions and screwing the whole situation, something that should be understood as:

"Now let's get in there and retrieve my arm." (Original wording is quoted in the very good answer of @DVK)

I think it is reasonable that there just has not been time to replace his arm before the attack on Starkiller Base, as this seems to be a very short period of time.

So it had to be replaced in the time of recovery after the attack on Starkiller Base (as during the attack he is still shown with a red arm), and the reasons seem to be:

Actual quotes provided by DVK in his answer (as usual ;).

Simple answer... his real arm had somehow been left on the Millenium Falcon when Han ran off. Therefore, his seeing Han, Chewie and the Falcon would have been his first chance to retrieve the arm.

Add a bit of snark, and you get the reason that C3PO points it out to Han.

According to actor Anthony Daniels, J.J. listened to 3-CPO himself for costume direction on the last shot:

The one thing that J.J. and I argued about was the fact that I didn’t like the red arm. C-3PO doesn’t like the red arm! Being the director he said ‘You’re gonna have a red arm.’ But have you noticed, because he listened to me, that the last frame of C-3PO waving at the Millennium Falcon was with a gold arm! And J.J. did that – love it.

Not the answer you're looking for? Browse other questions tagged star-wars the-force-awakens c-3po or ask your own question.