Book series, girl who works for a supernatural forces unit?

I am looking for a book series I read approximately 6 years ago (2010), in which a girl works for a special supernatural forces unit. They take down zombies, vampires, werewolves, etc.. She lives there and her best friend is a mermaid and I think her ex-boyfriend is a fairie. I really want to read this book again but I cannot think of the name! Thanks! 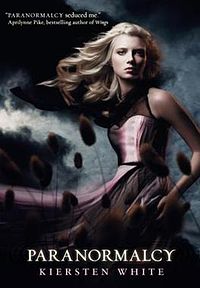 Paranormalcy follows the efforts of the International Paranormal Containment Agency (IPCA), a group tasked with policing various mythological beings who live secretly among humans. The protagonist of the story is an IPCA officer named Evie, a teenage girl who possesses an ability to detect paranormals disguised as human beings.

Evie's allies include a shape-shifting boy named Lend, who she meets as the story begins, and a faerie named Reth, whom she previously admired. Both young men become romantic interests of Evie's as the tale progresses, while the three of them are joined by other companions as well. At its center, Paranormalcy examines Evie's attempts to balance her IPCA duties with her growing desire to lead a normal teenage life.

It was followed by Supernaturally (2011) where Evie flirts with a normal life and learns more about her background and Endlessly (2012), which according to Wikipedia, "Evie must deal with a new IPCA director, as well as the continuing battle against the Dark Faerie Queen."

Not the answer you're looking for? Browse other questions tagged story-identification supernatural-abilities or ask your own question.

3
Shifter book series with the alpha's daughter as the main character through out the series
10
Identifying a book about a girl who has the fey sight?
3
Book set in contemporary times about a travel writer who is inducted into the world of the supernatural
2
Trying to find the name of a book
6
Novel about a high school student werewolf meeting a girl (Elise) who becomes a vampire
6
Book where government performs experiments on women who later have psychic children
4
YA book series about a teenage dragon