Why didn't Sauron signal the Orcs that Frodo and Sam were at Mount Doom?

Sauron literally put his eye directly on Frodo and I'm sure he knew Frodo had the Ring, and even if he didn't, why didn't he signal the Orcs to go after Frodo and Sam?

He literally just let them pass.

I mean, even if he did, by some miracle know that Gollum was following them, why would he trust Gollum with taking down two hobbits?

Does he think the Orcs would take the Ring? If so, how does he think he'll get it anyway, he doesn't have a physical form.

He wouldn't have sent Orcs after his Precious, not if it was so close to the place it could have been destroyed; he would have sent the Nazgûl. This is what he does later, when he realizes (too late) that his defeat is imminent (emphasis mine):

[F]ar away, as Frodo put on the Ring and claimed it for his own, even in Sammath Naur the very heart of his realm, the Power in Barad-dûr was shaken, and the Tower trembled from its foundations to its proud and bitter crown. The Dark Lord was suddenly aware of him, and his Eye piercing all shadows looked across the plain to the door that he had made; and the magnitude of his own folly was revealed to him in a blinding flash, and all the devices of his enemies were at last laid bare. Then his wrath blazed in consuming flame, but his fear rose like a vast black smoke to choke him. For he knew his deadly peril and the thread upon which his doom now hung.

From all his policies and webs of fear and treachery, from all his stratagems and wars his mind shook free; and throughout his realm a tremor ran, his slaves quailed, and his armies halted, and his captains suddenly steerless, bereft of will, wavered and despaired. For they were forgotten. The whole mind and purpose of the Power that wielded them was now bent with overwhelming force upon the Mountain. At his summons, wheeling with a rending cry, in a last desperate race there flew, faster than the winds, the Nazgûl the Ringwraiths, and with a storm of wings they hurtled southwards to Mount Doom.

But regardless, it's an equally sensible question to ask why he didn't send them; so that's the one I'm going to answer.

I assume you're referring to this moment from the film version of Return of the King: 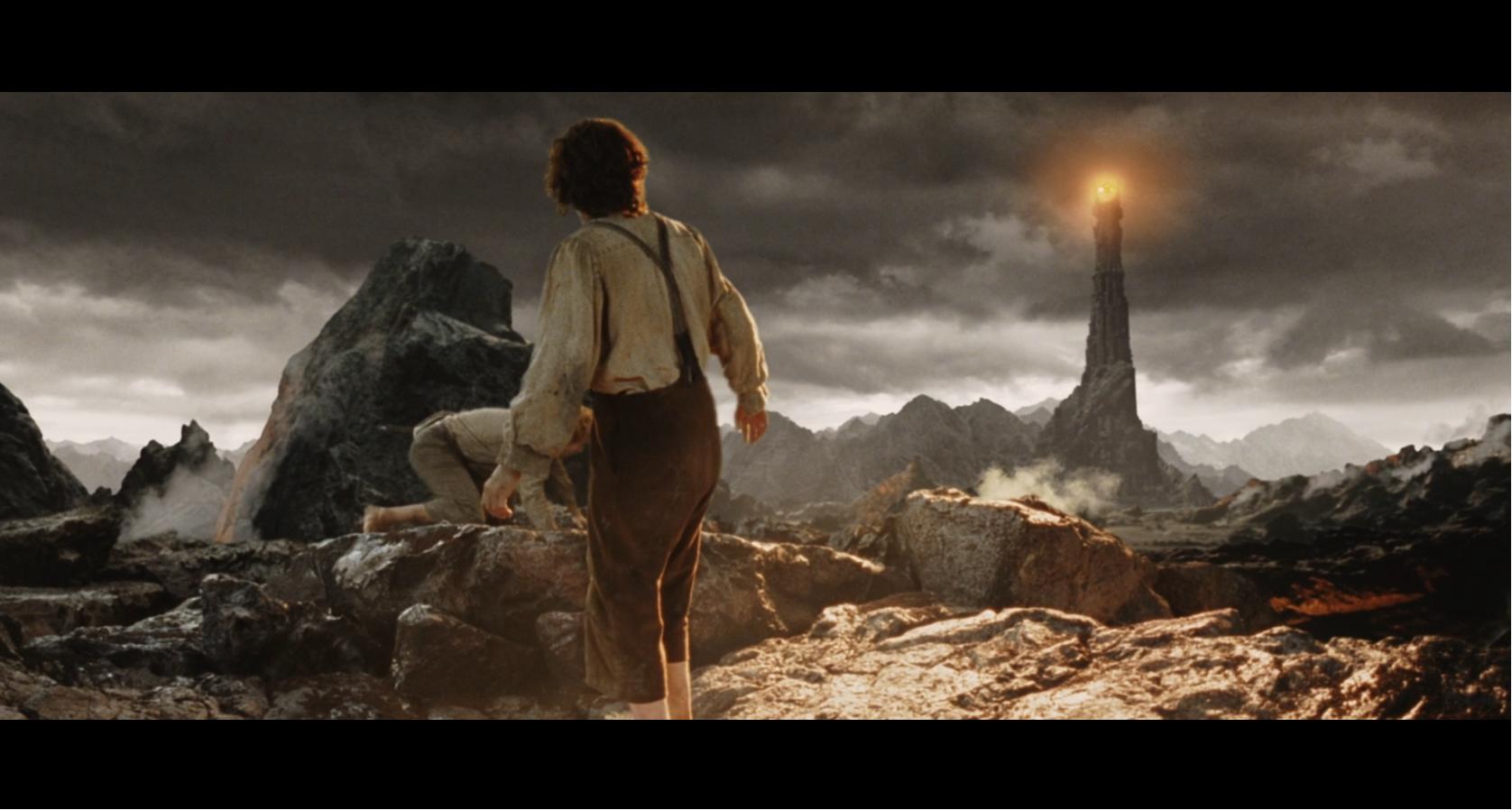 The obvious (and, really, only) answer is that Sauron didn't actually know the Ring was there. So the question becomes, "Why not?."

A similar scene appears in the book, but it's a much less tense moment; it's clear that Sauron's attention is focused on the Black Gate, where Aragorn's army is massed:

They came to the path and found that it was broad, paved with broken rubble and beaten ash. Frodo clambered on to it, and then moved as if by some compulsion he turned slowly to face the East. Far off the shadows of Sauron hung; but torn by some gust of wind out of the world, or else moved by some great disquiet within, the mantling clouds swirled, and for a moment drew aside; and then he saw, rising black, blacker and darker than the vast shades amid which it stood, the cruel pinnacles and iron crown of the topmost tower of Barad-dûr. One moment only it stared out, but as from some great window immeasurably high there stabbed northward a flame of red, the flicker of a piercing Eye; and then the shadows were furled again and the terrible vision was removed. The Eye was not turned to them: it was gazing north to where the Captains of the West stood at bay, and thither all its malice was now bent, as the Power moved to strike its deadly blow; but Frodo at that dreadful glimpse fell as one stricken mortally.

Here's how its described in the script:

From context, it appears to be a confluence of two main factors:

It seems likely that, even if Sauron had sensed something unusual (and there's little indication that he actually did), he was distracted by Aragron before he could investigate sufficiently to determine that it was the Ring. 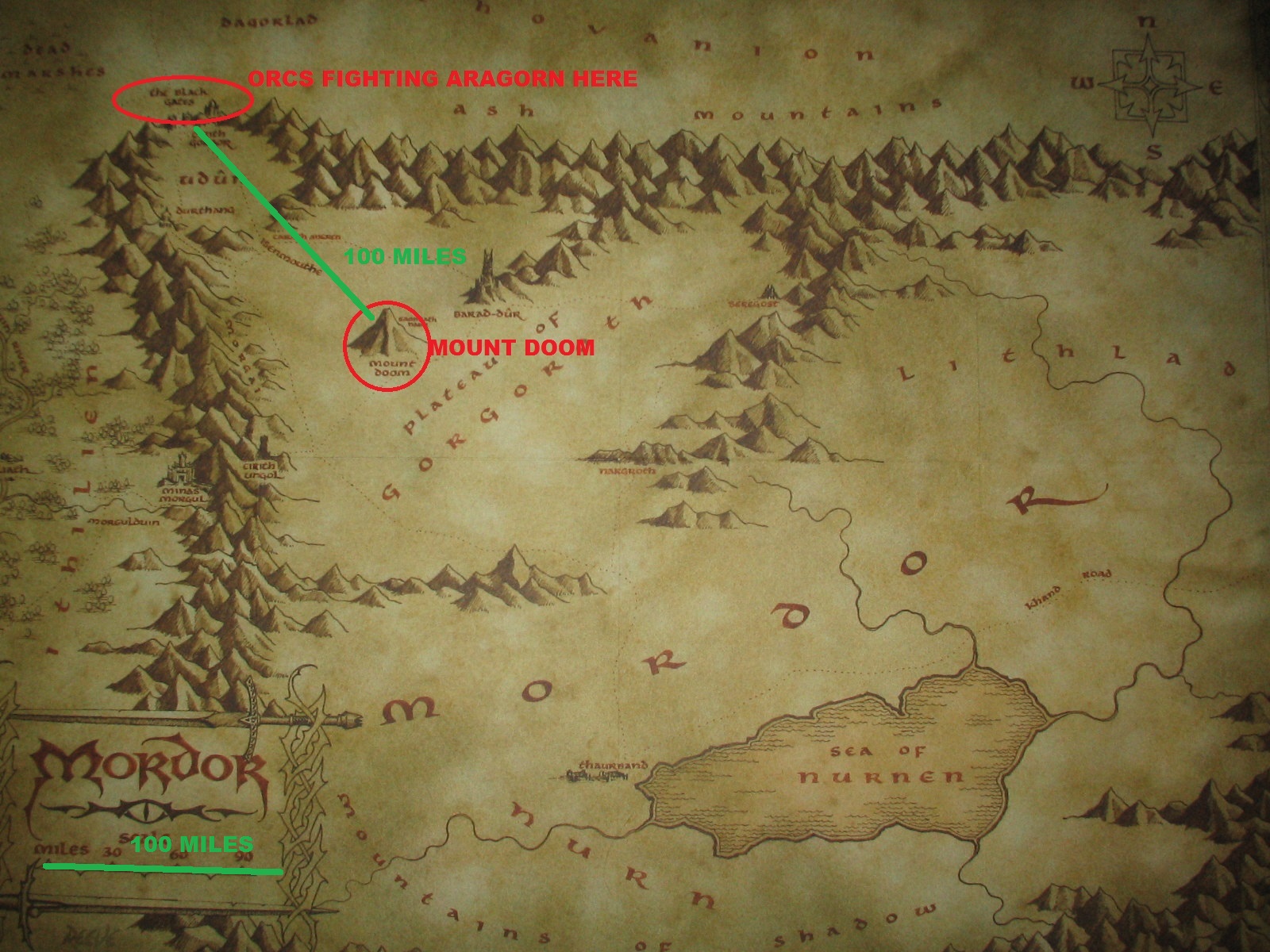 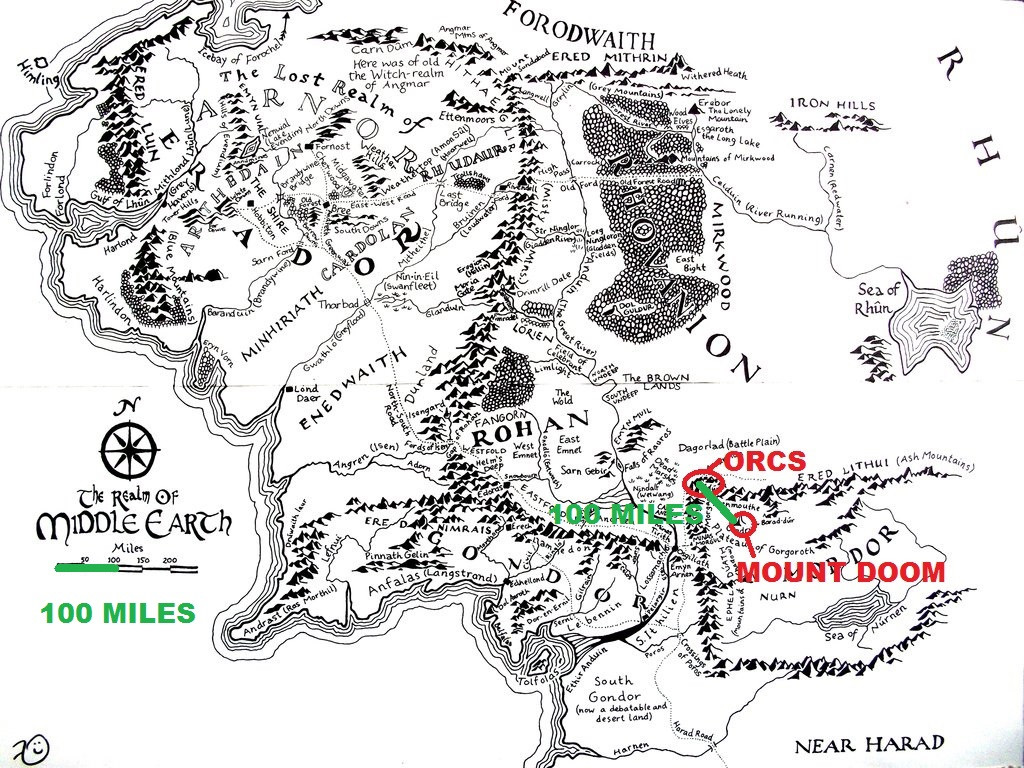 With that kind of distance between Sauron's forces and Mount Doom, the only hope Sauron had was to summon his winged Nazghul. He did so, and even that took too long to be of any use. If he had ordered his Orcs to run towards Mount Doom, they would have shown up about a day and a half too late to help.

2
When Sauron saw Frodo at Mount Doom, why doesn't he do anything?
85
Was the "Eye of Sauron" Sauron's actual physical form?
31
Why does Sauron release Gollum/Smeagol after he has interrogated him?
16
Why did Sauron let Gollum roam Mordor freely a second time?

163
Why didn't Sauron become invisible while wearing the One Ring?
29
Why does Frodo trust Gollum when Sam doesn't?
19
Why didn't Gollum kill Frodo and Sam?
46
Why was Sméagol affected by the ring so fast, while both Frodo and Sam could handle it without immediately trying to choke each other?
11
Could Gollum have been trying to prevent Sauron from obtaining the One Ring?
47
Why did Sauron react the way he did when Frodo put the Ring on inside Mount Doom?
26
What were the "Black Pits" the orcs referred to?