How do Starfleet Sensors Actually Work?

In the answers to my question (in the first link), there are references to points like watching for respiration and echoes or sounds. In the second link, there are comments about how subspace is used.

But this still leaves something open: How do the sensors actually work? Today we can "scan" things by radar or sonar or even lidar. But all of these involve sending out a beam (or a sound) and studying what comes back. In short, we have to work with reflected information.

But in The Enterprise Incident Checkov is able to find Spock on a Romulan vessel, where they would certainly be blocking any incoming electromagnetic beam that would be used for active scanning. Also, the Commander's quarters (or any quarters) are not likely to be directly up against the hull, where vibrations could be easily detected.

This would be true of scanning a spaceship, too. The sensor beams would either be reflected back by the hull or they'd penetrate. If they're powerful enough to penetrate the hull, then they'd go through a lifeform inside and not be reflected back.

So what do Starfleet ships use to read information about what is inside other ships or behind objects (like in buildings) or what's on the parts of a planet that aren't directly in their line of sight?

I highly recommend picking up a copy of the Star Trek: The Next Generation Technical Manual, which answers these types of technical questions. From the same section that answered the life signs question:

The same section goes on to describe the long-range sensors of the Enterprise-D, which consists of a package of both active (i.e., like sonar) and passive (i.e., like human eyesight) EM, subspace flux, gravimetric distortion, thermal and neutrino imaging scanners.

In a nutshell, sensors aboard starships work just like sensors work in real life, just with some extra technobabble. When a starship wants to scan something passively, it uses its neutrino sensors. Otherwise, it uses its array of various active scanners that can see well beyond visible light (and even well beyond normal spacetime).

Why neutrino sensors? Neutrinos have the distinction of being some of the most weakly interacting matter in the Universe: they can pass through nearly anything without any problems. For example, a cloud of neutrinos can pass through the Earth without losing much of its mass.

While a neutrino sensor wouldn't be especially powerful, it would provide at least some information even through the thickest of barriers (like planets, starship hulls, and walls).

In much the same way real ones do. Starfleet ships are covered in large sensor pallets. These installations collect information based on how they're designed to interact with phenomena and energy. They work no different than real world sensors but presumably are computerized and more sensitive and powerful as well as able to detect the fictitious particles/energies of Star Trek physics. To detect certain things real world sensors are based on certain materials. For example to detect infrared radiation; Sensor contains a device coated with Indium Antimonide which interacts with infrared waves and sends the data to a aperture, display or computer. So it's a safe bet the ships sensor pallets are nothing but a HUGE network of different types of sensors integrated. Just like we have sensors and experiments on probes we send into space, so do they or the integrated sensors on real navy ships. For detecting things in the entire EM spectrum (radio waves, microwaves, gamma waves), particle detection such as muons or neutrinos, anti-matter, gravitational waves. The Ships computer converts that data into relevant information or into visual capacities we can interpret (Viewscreen) 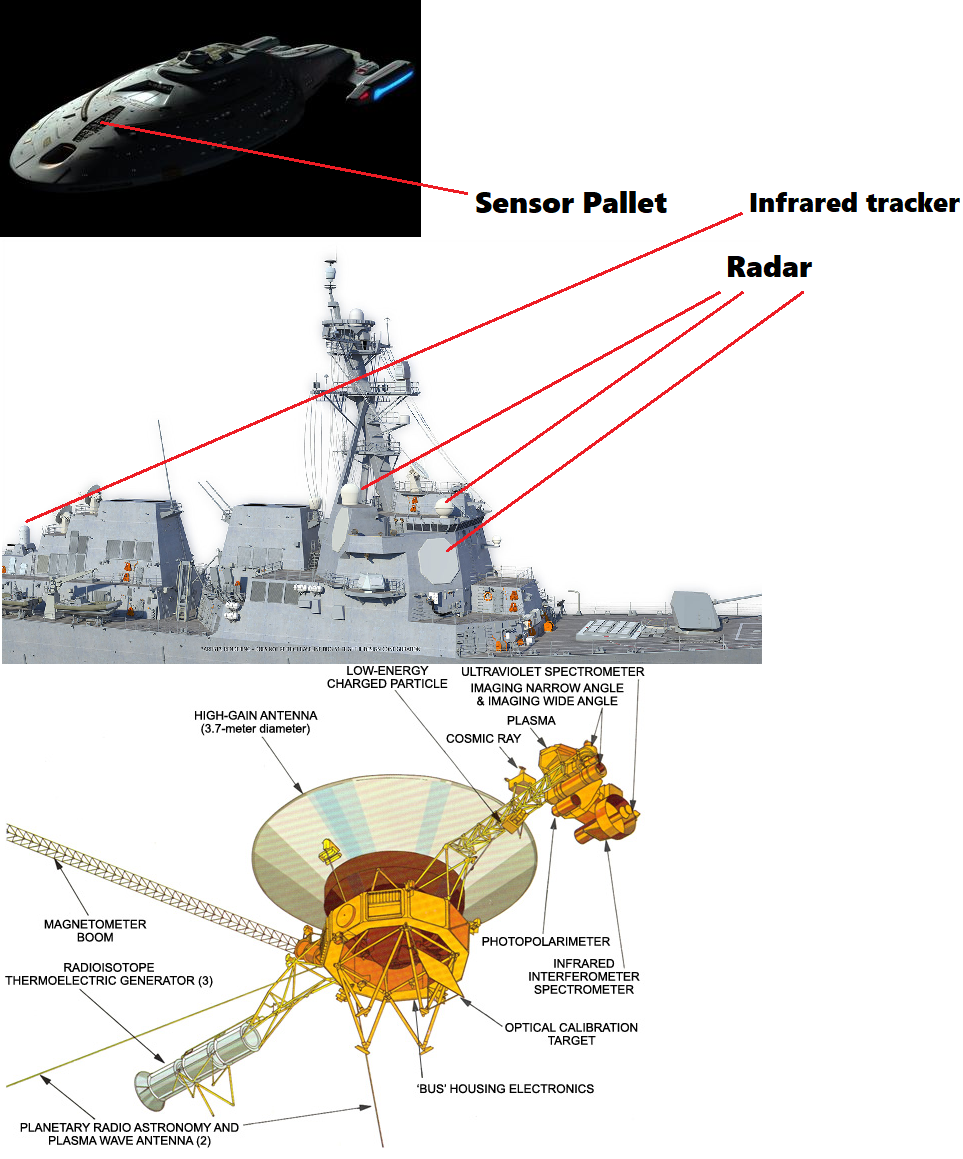 22
How do the sensors in Star Trek receive information faster than light speed?
14
How Do Starfleet Sensors Detect Life Signs?
5
What is the range of the Enterprise-D's sensors?

22
How do the sensors in Star Trek receive information faster than light speed?
15
How do Hypo-sprays work?
37
Roughly how many starships are in Starfleet?
14
How Do Starfleet Sensors Detect Life Signs?
5
How did Mendon join Starfleet?
25
What happens to humans that choose not to work, or to join Starfleet?
21
How could the Picard Maneuver confuse sensors from the Warp Era?
2
Speed of Scanners and Sensors from Star Trek
3
How were the security sensors modified without the accessing codes?