Movie about an amulet and book of magic?

A girl gets an amulet/necklace then whole town become like zombies and try to kill her.

She's chased to a chapel where they break through the walls and doors. She finds a hatch and goes underground it's vast with lots of pillars.

A man turns evil through this book of magic and kills a guy by crushing glass and mixing it with ice & alcohol and makes him drink it. His goal may have been to open up a portal.

This is about all I can remember.

Sounds like it could possibly be The Dead Matter from 2010? This was a direct-to-video release.

A girl called Gretchin is mourning her brother, she gets hold of an amulet that allows her to control the dead. Gretchin thinks that she could contact him with this, however she unwittingly creates a zombie army, they call the zombies Post-Mortem Americans in the film.

Two feuding vampires Vellich and Sebed turn up looking for the amulet. A bit later in the film McCallister a vampire hunter turns up to help Gretchin.

Here is the IMDb link

This picture might be the scene at the end you describe 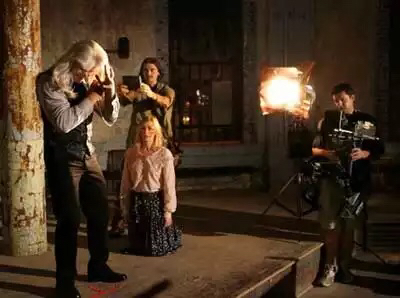 And here is the trailer for the film

17
What book features dragons, song-driven magic, and talking otters?
12
Fantasy series about magic and non magic humans on related worlds
4
Book about a Magic School set in a castle
4
Book trilogy about magic monks/wizards and an evil empire/kingdom
13
Fantasy book about high elf lord, human woman, magic
7
Magic school and chalk magic
17
Movie with an amulet and a princess who asked three questions from her suitors
5
Book about a girl with magic and a boy a with curse
13
80s or 90s children's movie about magic dying