What happens to Kylo Ren's mask at the end of the movie?

Is there any information in the novel about what happens to his mask? Because the last time I saw it was left behind on the planet that was later destroyed.

The mask is probably space dust. He will almost certainly fashion a new one, given the dress code of the Knights of Ren and the role that the mask serves.

His mask was almost certainly destroyed. During his confrontation with Han, Kylo clunked the helmet down onto the catwalk of the oscillator unit of Starkiller Base. He didn't carry it out of the unit, and the unit was completely destroyed. Then the planet itself was obliterated. The mask had little chance of surviving.

It is safe to say that Kylo Ren will fashion a new mask for himself. Of the seven Knighs of Ren we have seen so far, at least six wear masks (the second from the right in the image below may or may not be wearing one):

Furthermore, Kylo sees great power in masks, using Vader's helmet in own his meditations as a way of channeling Vader's darkness: 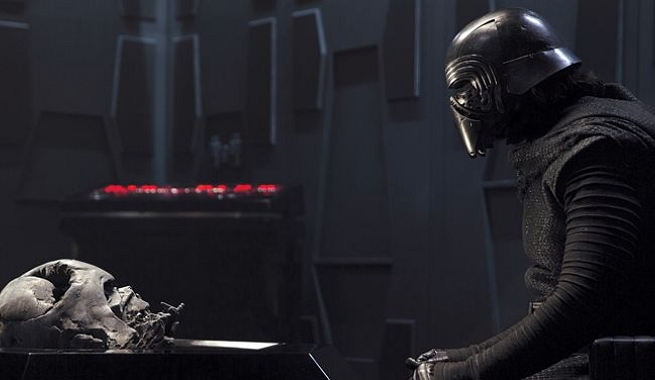 Finally, as J.J. Abrams himself says:

Kylo has probably made an analogy involving masks: without his mask, he is just Ben Solo, who he describes as

when confronting Han, much like Vader is merely Anakin Skywalker without his.

From this point of view, the mask is integral to Kylo Ren's identity.

7
Where's Vader's mask at the end of Force Awakens?
7
Why is Kylo Ren's Helmet so Heavy?