What happened to Finn's blaster at Maz Kanata's?

When entering, we see that Finn has the blaster that was given to him earlier: 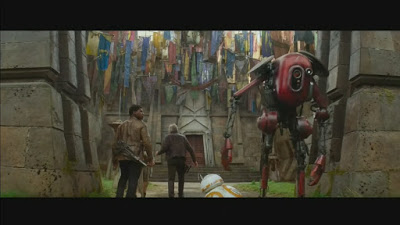 However, when the fighting begins, Finn tells Maz that he needs a weapon and no longer has his blaster with him. It seems unlikely to have been lost in the first shots, given how it is secured across his body. Also, Han and Chewie didn't lose their weapons and they are arguably less secure.

Now, when the team gets to the Resistance base, Finn again has his blaster:

So where was this blaster during the battle?

This is explained in the film's Junior novelisation

Finn glanced at the rubble that surrounded them. He’d lost his blaster in their escape from the castle. “I need a weapon.”

In the Official novelisation, we also get a brief exchange that didn't appear in the film or the script:

He looked back the way they had come. “Lost my blaster. I need a weapon.” Displaying surprising strength for one so small, Maz grabbed the wrist holding the lightsaber and raised it up. “You have one!”

As far as how he got it back (in time for the next scene at D'Qar), after the First Order troops left there was no pressure of time. It's likely that he simply made his way back into the rubble and found where he'd dropped it.

I think we can assume that the "Finn spends ten minutes looking for the blaster he dropped because he's an idiot" scene is going to be on the Blu-ray.

Could Han or the previous owners have had more of the same type blaster stockpiled and left in the Falcon? I know the Falcon had about 3 or so different owners since it was taken from Han, but a weapon stash was apparently still onboard, as Han didn't have time to take a bunch of weapons from the large cargo ship he and Chewie were working out of when the gangs chased them away on The Falcon. Perhaps Finn was able to find the gun in the basement rubble right before they left Takodana or Han simply had another just like on the Falcon. How Finn first lost the weapon is what I can't figure out, I know there was supposedly a deleted scene of Maz using the force to pull down a ceiling on some troopers, and perhaps around that time in a skirmish Finn somehow dropped his weapon or was disarmed of it?

1
Where does Finn's blaster go?

12
Why is Han so skeptical of the force and the Jedi when Chewie had lots of experience with Jedi?
21
Did this stormtrooper in “The Force Awakens” have a name?
20
How Does Kylo Ren not stop Chewbacca's blaster?
14
How did Rey get her blaster back?
9
What does Finn personally think of his past?
5
Where did the weapons on the Millennium Falcon come from?
19
Why does Han Solo's blaster have a hammer and what is its purpose?
40
How did Finn learn to understand Chewie so quickly?