Were there any improvements to the second Death Star (other than the change in exhaust port) that we know of?

We know that the second Death Star was meant to have a different/non-existent exhaust port and when under construction it had a shield projected around it.

Other than these elements, one of which was planned to be totally temporary, do we know of any other improvements over its predecessor?

Did it have improved defences against one-man fighters? Did its laser charge more quickly? Did it have an upmarket cafeteria?

This is covered in the film's junior novelisation

However, it had none of the former Death Star’s design flaws. The redesigned superlaser would require mere minutes — not hours — to be recharged, and could be focused more finely, allowing it to fire at moving targets, such as capital ships. With a projected diameter of 160 kilometers and a substantial increase in firepower, the new Death Star would be not only larger than the original but also much more lethal.

And in the Star Wars: Absolutely Everything You Need to Know" factbook which indicates that the station has double the number of turbolasers along with a sizeable complement of ion cannons 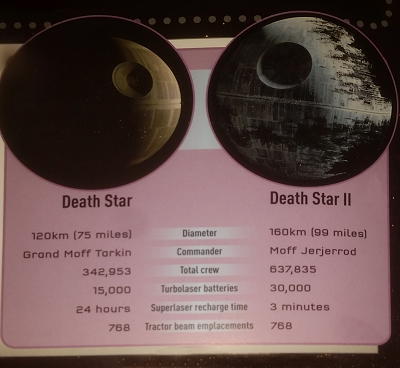 1
If the first Death Star had the weakness installed on purpose
5
Is General Dodonna referring to the Death Star's 'Primary Weapon' when he talks about its firepower?