Would Sauron have had the ability to appear in fair form again if he got the ring back?

In the First and Second Ages of Middle Earth, Sauron had the ability to change into an appealing form to Men and Elves. He could then deceive them, and used the name of Annatar. However, once he was on Numenor and the Island was destroyed, so was his fair form so he was subsequently trapped in his "hideous" form.

Since it is said that he was gaining much of his old strength back, would it have been possible for Sauron to regain the ability to appear fair to the peoples of Middle Earth again had he regained the ring from Frodo and Sam?

We don't know for sure; as far as we know, he never tries.

However, Sauron loses the ability to assume a fair-seeming form during the destruction of Númenor:

But Sauron was not of mortal flesh, and though he was robbed now of that shape in which he had wrought so great an evil, so that he could never again appear fair to the eyes of Men, yet his spirit arose out of the deep and passed as a shadow and a black wind over the sea, and came back to Middle-earth and to Mordor that was his home.

According to Appendix B, this occurs in S.A. 3319. The Ring was created c. S.A. 1600, so he had already made the Ring when he lost his fair-seeming form. It seems stunningly unlikely that recovering the Ring would put him at a higher level of power than when he was at in the Second Age, so I'm inclined to say no, he could not.

However, note that it only says he could not appear fair to men. He could, perhaps, still assume a form that seemed fair to Dwarves (for example), but we don't know.

No. From Akallabeth: "he could never again appear fair to the eyes of men, yet his spirit arose out of the deep and passed as a shadow and a black wind over the sea back to middle earth". Note that after he returns to middle earth he is in possession of the ring, thus he cannot appear in fair form even with the ring.

No he wouldn't,he had the ring when he left Numenor and was unable to wrought himself a fair semblance because he'd been immersed in evil for too long and as far as i know he was at his full strength then.

In a deleted scene from the final Peter Jackson film, Sauron demonstrates the ability to regain his "fair" form for a few brief seconds, just before his iconic fight with Aragorn.

There's no specific indication that possessing the One Ring would allow him to do so for longer, but by the same token I think we can assume that being uber-powerful couldn't possibly hurt his chances. 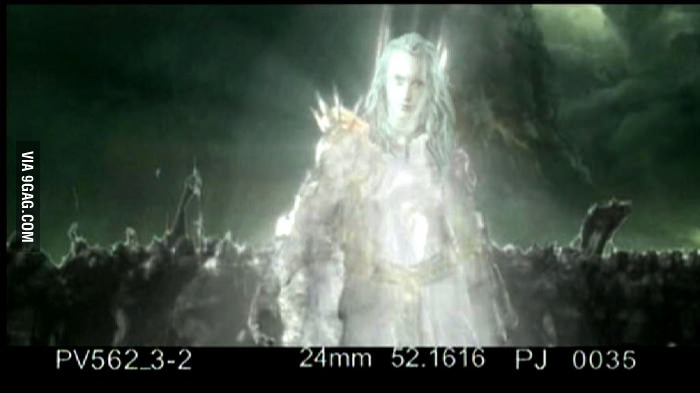 Surely he wouldn't bother to appear 'fair' if he had the Power of the One Ring - not the sort of entity to bother with niceties.

33
Would Sauron's army reach the Undying Lands if the Ring was not destroyed?
37
If Sauron had won, would the Valar have intervened?
451
Would the One Ring even work for anyone but Sauron?
43
Why did it take Sauron so long to regain strength?
43
Who did the Elves think Annatar (Sauron) was?
4
Did the Valar actually care about Middle-earth?
8
What is the nature of an Ainu's fair form?
14
Did Sauron ever betray Morgoth?