What Was the Purpose of Different Point of Origin Symbols?

While previous questions asked about it being coordinates or what Earth's point of origin was, what the symbol actually does when used in dialing, and about the meaning of the symbol itself, this is about something different.

Each stargate in the Milky Way galaxy has a different point of origin symbol. (See the first link above to see a number of them.) What is the purpose of having a different symbol for the stargate on every different planet when the gates can easily be relocated and will work just as well, even when they're moved to another planet or even taken out of the galaxy (as they were for the McKay/Carter bridge)?

I believe this was touched on in one of the comments on the other questions you've linked to.

While a gate address corresponds to a location in space, the point of origin is a unique gate identifier, kind of like an IP address or serial number within the gate network. 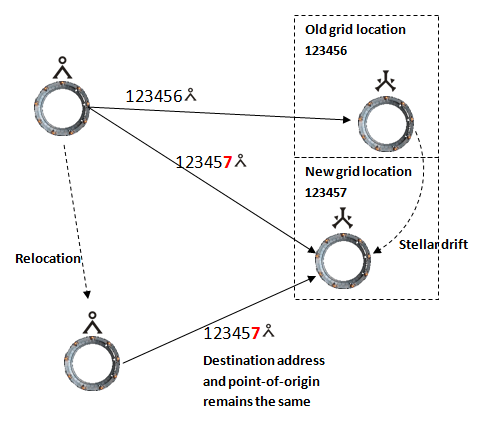 The tech-savvy may even think of the point of origin as the physical device address (MAC), which does not change, and the gate address as the routing address, which depends on the gate's location within the network.

Such a physical device identifier may be useful for:

P.S. Why does it have to be entered manually? This is one question I cannot answer. If it is meant to be an end-of-line character, it can be sent by the gate automatically when the user hits the DHD "send" (red) button. The user doesn't even need to know the point of origin glyph of his embarking address. If he has used at least one gate in the past, he will know the point of origin by eliminating the other glyphs already known to him.

Somewhere around Season 2 or 3 of SG-1, I noticed Earth's Point of Origin on an off-world gate. Normally, this would be considered a goof, due to a limited number of props Stargates - but in this particular scene, they zoomed the camera in so close that only 3-4 glyphs were visible at once, the pyramid point of origin being one of them.

At this point, I started thinking about a new Point of Origin theory, that seems to have been partially confirmed with Stargate Universe, possibly in an attempt by the writers to "fix" the prop goofs from SG-1:

With that small coincidence, it seems that the Icarus planet was closest to the Orion constellation, of all the constellations depicted on the Stargates (Or, rather, the gate was moved there from a planet in/near that constellation. I don't think that planet was originally part of the Gate network). That is why its point of origin was Orion, a symbol that is pretty common across the Stargate network.

Earth's point of origin, the pyramid on the Alpha gate we're so familiar with, I believe was originally on a planet near a pyramid constellation, before Ra took it and planted it on Earth. Then, during the next correlative update, it became associated with the Ancient point of origin, the one from the Beta gate, that the Destiny address was supposed to be dialed from.

So the Point of Origin would then be a rough "I'm in this area of the galaxy" symbol, and the particular ones used on the Stargates were meant to signify where the Ancients intended each Stargate to be positioned.

This then explains why Eli's suggestion actually worked, when any such Ancient limitation requiring a specific point of origin should have required the Beta Gate's point of origin: During the correlative update, back when Ra dropped the Alpha Gate here, those two points of origin became associated with each other. If the Beta Gate glyph was on the Icarus Stargate, that would have also worked - but because that gate was where the Ancients first settled, that glyph was truly unique.

Oddly enough, this also works with the original Stargate movie. Daniel Jackson needed the point of origin for Abydos, but according to the commonly accepted theory that the point of origin is unique to each and every gate, it should have been simple to determine. Excet he only knew what it was once Sha're showed it to him, meaning either there were a few differences between the Abydonian gate and Earth's gate, or they were completely identical - point of origin symbols and all.

The point of origin being entered manually becomes more important when you remember that 8 symbol addresses are also allowed, such as the ones used to find the asgard and atlantis. Entering the point of origin tells the system 'I am done, you may now connect'.

81
In Stargate, how can you have a point of origin with only one coordinate?
28
Stargate - Earth's "point of origin" Symbol
13
What Does the "Point of Origin" Symbol Actually Do?
14
How Could the SGC Dial the Destiny Without Knowing Where It Was?

28
Stargate - Earth's "point of origin" Symbol
14
How Could the SGC Dial the Destiny Without Knowing Where It Was?
13
What Does the "Point of Origin" Symbol Actually Do?
10
What is the Range of the Average Stargate?
13
Why Would the Wall on Abydos Have Coordinates Instead of Stargate IDs?
11
Why would in-galaxy dialing need to account for stellar drift?
6
What exactly do the eighth and ninth symbols in a stargate address represent?
4
Beta Gate Point of Origin Glyph
4
Gate address when dialing Earth Is the point of origin wrong?