What is the meaning of the ending of Another Earth?

sees that her "other" self (from Earth Two) is there at her house on Earth One.

What is the meaning of this? Did John

send the "other" Rhoda back so that our Rhoda could see what she would have become if she hadn't gotten in the accident, and had gone to MIT? Did John send the other Rhoda back to torture our Rhoda?

I don't understand the meaning of the end at all.

I don't think that John sent the other Rhoda back to meet 'our' Rhoda. The two Earths' histories diverged when they both observed the other Earth. At the moment of divergence, 'our' Rhoda was distracted by the other Earth and got into the crash. If this hadn't happened, she would have gone off to MIT to study the stars, just as communications with the other Earth were opening up and the expeditions from each Earth were being planned.

Rhoda was going to go to MIT, and she had a passion for astronomy. Had she not been in the accident, she would have been a natural candidate for heading to the other Earth. I've always assumed this is what occurred, and that we are seeing the alternate, successful Rhoda at the end of the film. This fits in with the movie's theme of the other Earth representing duplicate alternates of all of us who lived slightly different lives for the past few years.

Another option is that it's entirely plausible that on both Earths the Rhodas submitted winning essays to attempt to be on the trip to the other Earth. Only due to the tragedy that she caused did 'our' Rhoda stay on her Earth.

According to the summary on Wikipedia, he did it to reassure her that what she wanted to be true, was true:

Rhoda hears in a telecast the citizens of the mirror Earth were identical to those on her Earth in every way until the moment they learned of the others' existence. From that point on, the identical people on the different Earths probably began to deviate in small ways, changing their actions. Rhoda hopes her identical self on the other Earth did not make the mistakes she made on the night of the accident.

My interpretation is that for the final movie scenes -- where we watch Rhoda see the video of John preparing to travel, and then walk up her driveway and see "herself" -- we have switched to the perspective of the alternate earth. The Rhoda waiting on the driveway is the Rhoda we have watched throughout the film, who has followed through with visiting herself. I do not accept that the Rhoda we watched through the film transferred her ticket to John. (As if she could exercise control over who went?) On Earth 1, Rhoda is the ticket winner; on Earth 2, John is the ticket winner.

Look at this picture: 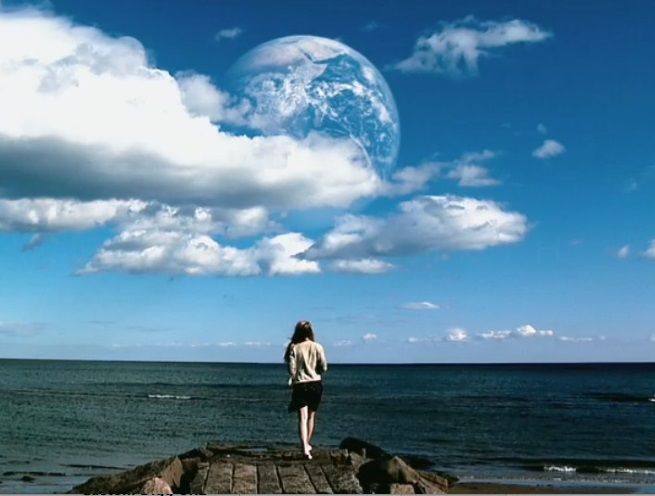 How far does that put the two Earths? Not very far. In and around the distance of the moon. It takes 3-4 days to get to the moon from Earth - this is for a manned mission. Let's triple the time, that would make 12 days, about 2 weeks. 2 weeks is how long it would take to reach the other Earth.

Perhaps there was no competition on Earth-2. Or even if there was Rhoda didn't win it as she arrives only 3-4 months later.

Hence it is more likely that John's landing on Earth-2 lead to Rhoda of Earth-2 getting to know the story of the accident and influenced her to come to Earth 1. If not for John's story, Rhoda on Earth 2 would be one among thousands of MIT (assuming the accident doesn't happen) and other top university students enthusiastic to travel to the other Earth. Not enough to be picked for travel.

If the accident did happen on Earth 2 as well, Rhoda has no reason to be selected if not for winning the competition (which she hasn't else she would arrive on Earth 1 much sooner, in 2 weeks and not 4 months)

In many of these answers the two earths deviate at the moment of discovery. We know this not to be true because of the SETI woman making contact with herself at the exact time of communication. So everything on both earths is at least the same up to that point. The wife and child die on both earths. I had assumed that 4 months was the amount of time it took to travel to the other earth.

The synchronicity did indeed end when the two planets first made contact. John finds his wife and child ( and himself) still alive and Rhoda is attending MIT. John sends Rhoda's other self back to let her know everything is ok.

Or maybe, in both worlds Rhonda had an accident. While John's wife and son died in our world and he survived, probably John2 died in his world and his wife and kid survived. When John 1 got there, he got " reunited" with "his" family and sent Rhonda 2 to earth 1 or just like Rhonda 1, Rhonda 2 probably won the lottery. As for the argument above that Rhonda2 look well dressed because she's probably more successful- could be true but if you had to meet a stranger or your other self wouldn't you want to look nice?

The Earths did not diverge, because the woman from SETI was talking to her mirror person. But if it was a true mirror person, why would one ask a question and the other reply? They should be both asking same question at same time. This shows us the story has logic flaws. I could go on and on about this flaw.

So if they did not diverge, the rest of the movie does not make sense. They did diverge and the SETI episode was an oversight.

Now they did diverge: She gave her spot to the man and the other gal on E2, being that an MIT astrophysics student won the contest, without being a felon, and came to Earth! This is why they chose an MIT graduate to be the heroine of story—otherwise she could have been a doctor and the story could have been the same.

Not the answer you're looking for? Browse other questions tagged another-earth or ask your own question.