Is there any canon evidence that FN-2187 actually worked in sanitation?

Finn tells Han that he worked in "Sanitation" on Starkiller.

It just occurs to me - the "I was in sanitation" line given to Han seems to be the only actual canon evidence of "Sanitation" job.

Finn is always trying to create a positive impression of himself with the Resistance, from the get-go:

In reality, we know that he was 1% of his class, model stormtrooper cadet, personally groomed for promotion by Captain Phasma (Evidence of that: #1; Evidence #2).

However, I am pretty sure telling Han "Hey, I was 1% of my class, model stormtrooper cadet, groomed for promotion by Captain Phasma" isn't high on his list of brand management plans.

Far better to pretend to be a lowly "sanitation" worker than top-flight cadet that he really was.

So, my question is - do we have any direct canon evidence proving that the "sanitation" job was real and not a fib to make himself look better to Han/Resistance?

Knowing where trash compactor was isn't direct evidence, though it is circumstantial one.

Yes, it says that he did in the Force Awakens: Visual Dictionary. 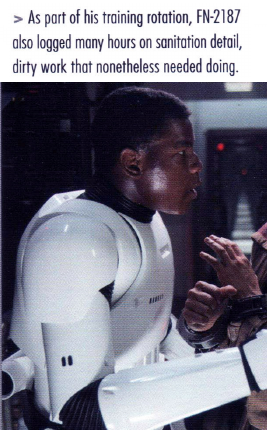 As part of his training rotation, FN-2187 also logged many hours on
sanitation detail, dirty work that nonetheless needed doing.

As well as in the new canon novel Star Wars: The Force Awakens - Finn's Story

After years of training, FN-2187 had itched for some real action. Like other stormtrooper cadets, he’d rotated through several lower-level duties, including a janitorial assignment, but he hadn’t seen any real live-fire action yet. Then one day their trainer and leader, Captain Phasma, told him that they would be deployed. So FN-2187 gathered his men, double-checked their gear, and headed to their transport.

When Han, Chewie and Finn capture Phasma, and they need to decide what to do with her, Han asks at around 1:39:25:

Is there a garbage chute? A compactor?

And Finn answers with an evil smile - and with the confidence of someone who knows:

So, he speaks from experience and knowledge?

22
Why does the TIE Fighter Poe Dameron and Finn steal have 2 seats and require a gunner?
16
Where did Finn get the blueprints for Starkiller Base?
23
By the end of The Force Awakens, who knows about Kylo Ren's family?
4
In The Force Awakens, why were X-Wings so much more accurate than TIE fighters?
5
Why does the Resistance trust Finn so easily?
3
Is Poe Dameron Force-Sensitive?
11
How could Finn know about Han Solo, given Finn's upbringing?
9
What does Finn personally think of his past?
5
How can Finn pilot this vessel?
33
What was Finn going to tell Rey?