Ask Question
Asked 5 years, 9 months ago
Active 5 years, 1 month ago
Viewed 39k times
-37
votes
Locked. This question and its answers are locked because the question is off-topic but has historical significance. It is not currently accepting new answers or interactions.

First, if you are thinking that this question is a joke or troll, I'd like to welcome you to the 21st century when the mankind is discussing legality of gay marriages.

Now, if you look at the sexuality (I'll keep it clean) of all the Avengers minus Captain America:

To prove that he is gay, let's look at his emotional responses: In 21st century, when he met Peggy, he didn't become emotional. But, when he saw Bucky, he became emotional.

I am a straight male and I am creative enough to emulate the situation well. If I had met my first love in such situation, I would have become emotional and it'd actually hurt to know that she is old and I am young. Talking about a dead best friend who is somehow alive and attacking me, my natural response would start with a slang. By no means, Captain America's emotional response looks straight man's response and it looks a gay's response.

Is Captain America really gay? Am I overthinking or producers are really hinting something to throw later? These days it's common in media for awareness. For example, Flash (2014) TV show has a gay police officer.

To my knowledge, there has never been any direct remarks about Steve Rogers sexuality in the MCU, but his actions overall show no reason to assume he's not heterosexual.

He was just beginning a traditional 1940's-style relationship with Peggy Carter at the time he crashed into the ice. His very last conversation with her was discussing a date they would never get to have. By the time he re-awoke, that relationship was obviously past. He goes to visit her in the hospital, showing that he still feels some connection to her, but there's no real chance for relationship there.

In Captain America: Winter Soldier, we can clearly see Steve and Sharon Carter flirting, and he asks her out on a date. At the end of the movie, Black Widow even strongly recommends her persue that relationship.

There's also hints of a relationship between himself and Black Widow, such as his remarks in Age of Ultron to Banner.

You are attempting to analyze his behavior based on the behavior we might expect from college frat boys in the year 2015. He's from the 1940s; his upbringing would have instilled in him "proper etiquette" for getting involved with a woman, including a slow and chaste period of "courting" (which he was clearly doing with Peggy), though not necessarily anything so formal. But he certainly is not the kind of person to grab the nearest single woman and hop into bed with her.

Is Captain America gay? No. That doesn't throw out the possibility of him being bi, but he clearly has some attraction to women.

Captain America kisses Sharon Carter. He then makes a comment that it was long over due.

So, my earlier point that he is classic slow moving guy holds up..

Captain America clearly fancied Peggy Carter, as he kept a picture of her in his compass.

He also did not pull back with revulsion when Black Widow drew him for a kiss to evade the SHIELD agents. 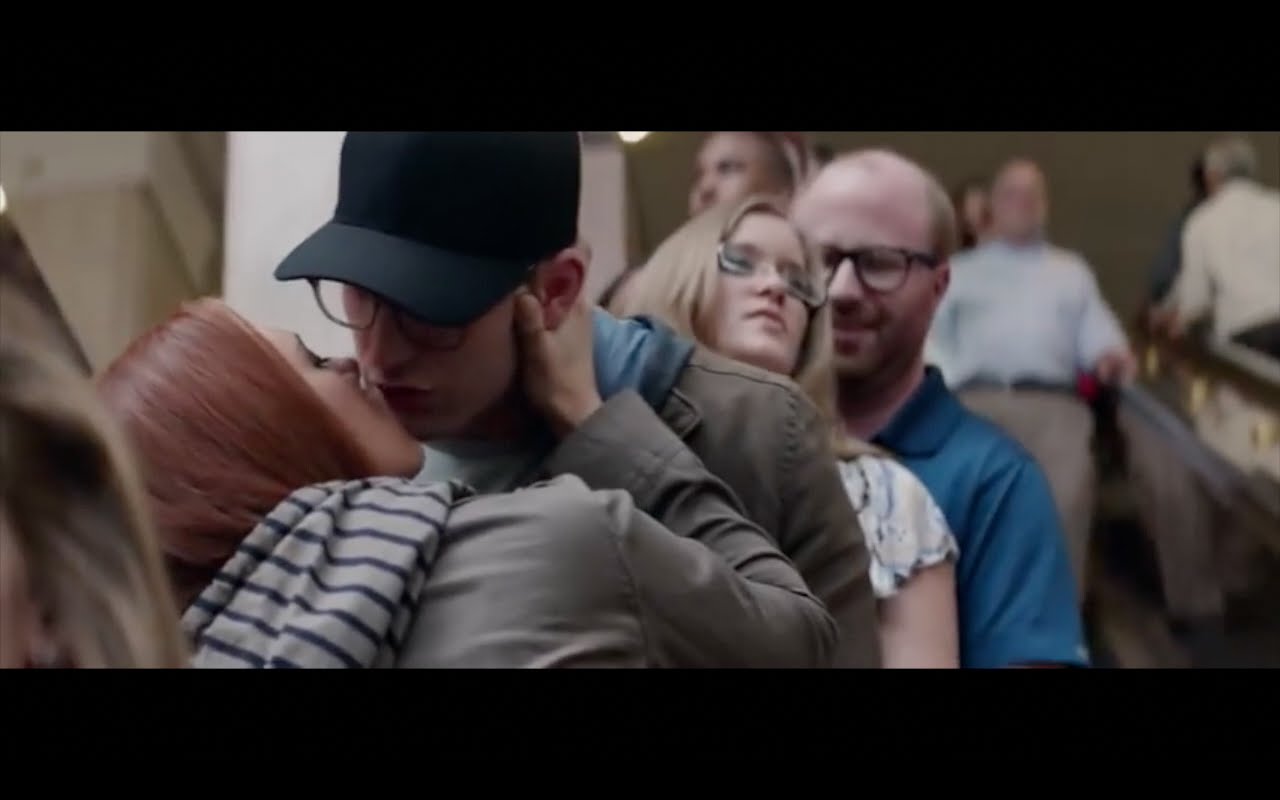 As to why he didn't "drag her to bed." Captain America is not a crazed satyriac like Tony Stark. He is the kind of guy who likes to court a girl and isn't out just for sex, but for a lasting and meaningful relationship.

Captain America also invites Sharon Carter to use his washing machine, which is a kind of 'get to know you' approach, although she declines.

From these three events I think we can safely assume that Captain America at least has some attraction to women.

Perhaps the Marvel Cinematic Universe doesn't show Captain America being all that interested in women, but considering he is a man out of time, it might be a while before he hits his emotional stride again.

You do have to remember he is a man living in the early 2000's with the mentality and cultural mores of a 1940's soldier. It will take time for him to adjust and become culturally aware enough to successfully date.

As for the comic version of the character, Captain America has had more than a few girlfriends over the years and has been clearly heterosexual despite the fan-fiction to the contrary.

I can name at least three: 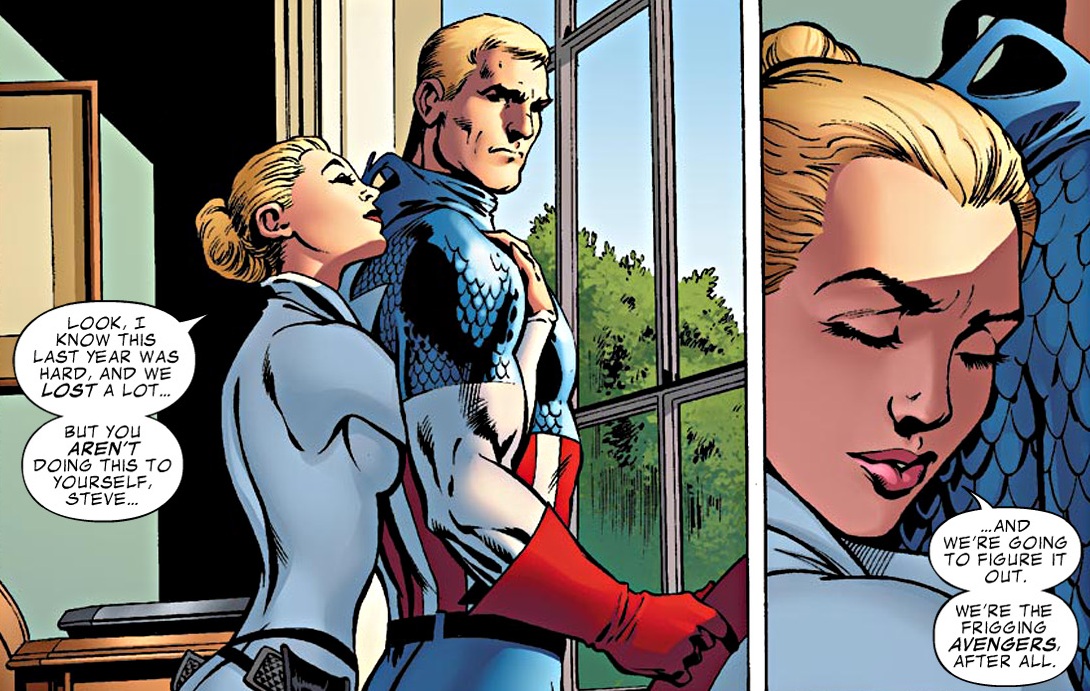 We don't know if Steve Rogers is really secretly gay or bi-sexual and hiding it or living in denial (see: Bobby Drake), but he has never shown any outward hints of romantic or sexual feelings towards other men.

Additionally, he has had romantic (and presumably sexual) relationships with women in the past.

Before his freeze, Peggy Carter was Steve's girlfriend for a time. 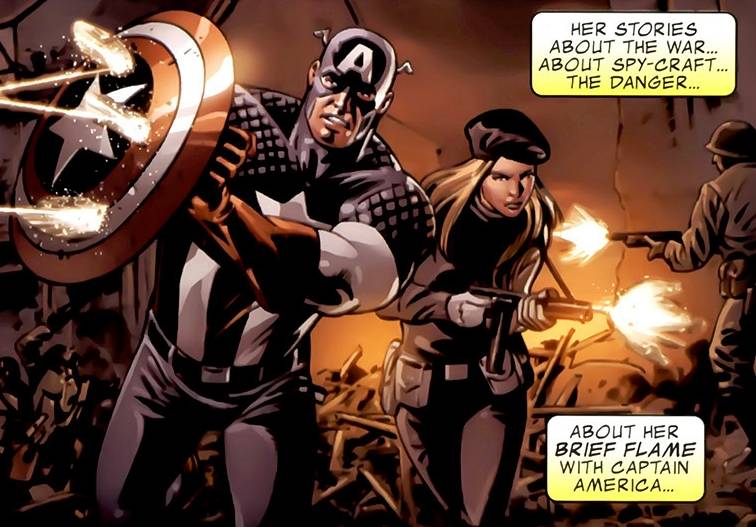 Steve Rogers has also had a relationship with Sharon Carter.

They talked about getting married, and they've even kissed. 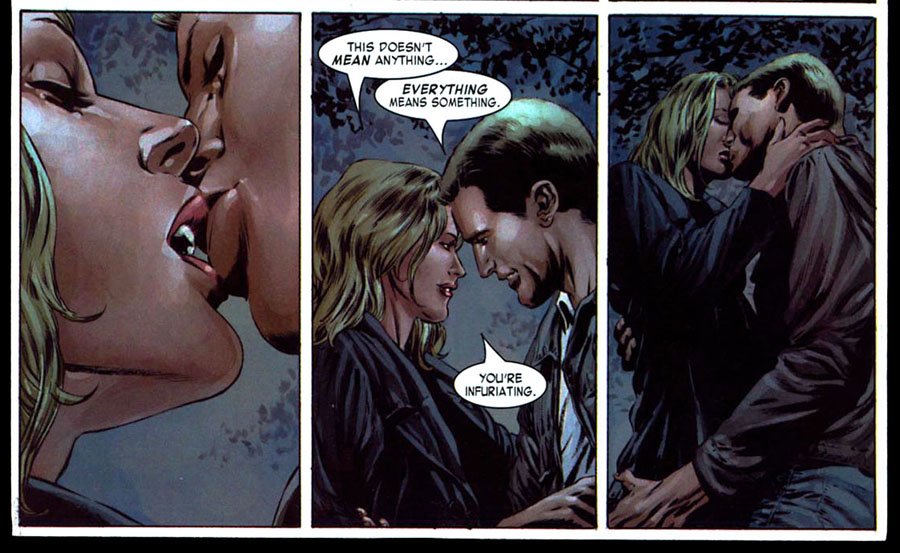 Additionally, in at least one alternate universe, he has been married to a woman.

He's also dated his neighbor Bernadette Rosenthal, and has also professed his love for her. 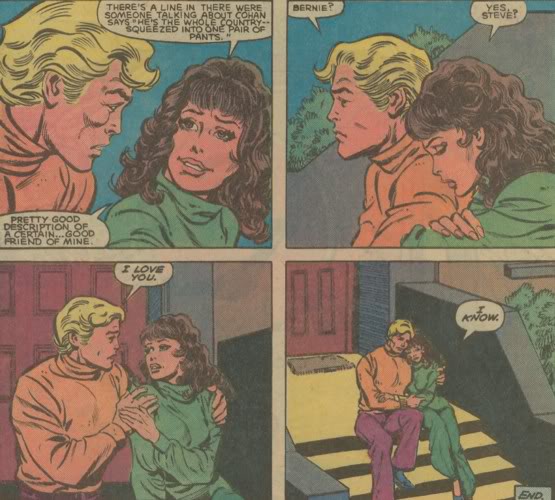 Not all of his girlfriends were on the side of good, though. He also dated Diamondback, a member of the Serpent Society. 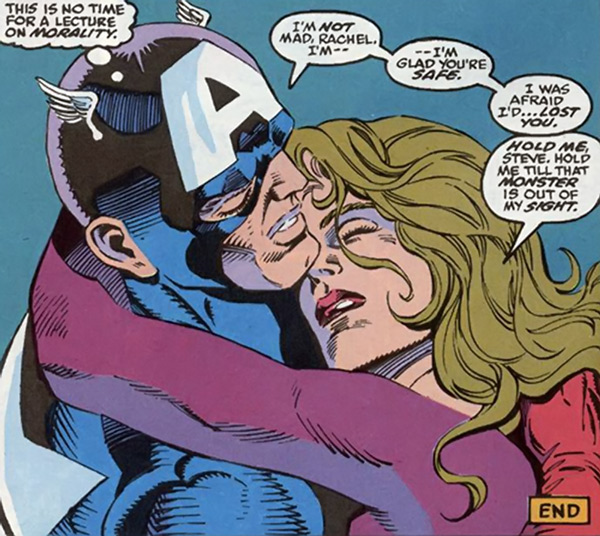 Steve has shown romantic interest in Peggy Carter, and laments his lost chance with her. But it's true that we haven't seen him in any relationship yet.

Part of this can be attributed to Steve feeling like a fish out of water and not being able to find someone with enough common ground between them. He explains this in The Winter Soldier. Per the transcript

Natasha Romanoff: Was that your first kiss since 1945?

Natasha Romanoff: I didn't say that.

Steve Rogers: Well, it kind of sounds like that's what you're saying.

Steve Rogers: Believe it or not, it's kind of hard to find someone with shared life experience.

Additionally, he's also a pretty busy guy. While the scene is played partially for laughs, it's also pretty true. He's working with SHIELD, and constantly out on dangerous missions - not the best situation if he's looking for a serious relationship.

Natasha Romanoff: You know, if you ask Kristen out, from Statistics, she'll probably say yes.

Natasha Romanoff: Too shy or too scared?

Steve Rogers: Too busy! [Steve jumps out of the jet]

However, Emily Van Camp has said in an interview that there will be hints of a romance between them in Civil War.

We get to explore... I can't say we are going to that extent of it, but they are certainly getting to know each other. And they know who each other are.

This was confirmed in the final cut of the movie when the two share a romantic (and passionate) kiss.

So a man who has difficulty interfacing with people because of a century of culture shift and was always rather shy with women not grabbing random women off the street and bending them over the hood of a car must therefore be gay? Cap is also a hardcore boy scout who may well not believe in sex before marriage. He is very old and has nobody to talk to with any kind of shared experiences who isn't nearing a hundred years old.

Given that he is shy romantically, and the entire cultural divide (which they even joke about constantly in the movies with him not getting references), not even getting any kind of slang, I think it is absolutely reasonable to be reticent with regards to sex.

But this should be a good takeaway for real life too: you can't begin to judge someone else's sexuality based on suuuuper outdated stereotypes. And similarly, number of people slept with is not any kind of metric of a person for good or ill, it's just a number.

3
In the films, was the portrayal of Captain America supposed to come across as gay?
-16
Is Colossus asexual in nature?