Is there a canon reference calling droid language "Binary"?

So a question popped up on my sidebar asking about Binary, which is apparently the name given to robot speech in Star Wars (specifically, the very non-binary language used by R2-D2 and similar astromechs). The name was clearly created by someone who had no clue about computers, communication protocols, etc., and I wouldn't put it past the film industry to use such a ridiculously inaccurate term just because it's vaguely computer-sounding. But I don't remember ever hearing of The Binary Language in any canon source. I know there are references to binary languages, but all the ones I can find are references to specific droids and their specific languages which aren't actually heard on-screen.

Is there any canon source that refers to a non-binary droid language as Binary?

Per the Star Wars: Absolutely Everything You Need to Know factbook

"R2-D2 talks in binary, a language of beeps and whistles" 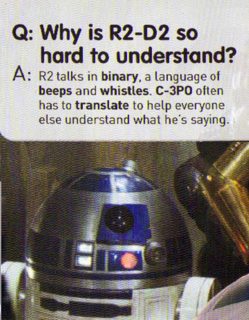 It's also mentioned in the junior novelisations for Force Awakens and the prequel novel along with one of the books in the Star Wars: Rebels series.

The lead TIE cracked, then flared, then just wasn’t there anymore. He broke to his right, yanking back on the stick. BB-8 sang a burst of binary, and then Poe was behind a second TIE.

She grabbed her staff from the walker, then ran out into the desert, heading toward the sound. It repeated, the same tone at a precise rate. Binary, from the sound of it. The language of droids.

Ezra spun around. Kanan stood in the doorway with Hera and Chopper behind him. The droid snickered in binary. Ezra frowned. He should’ve known better than to wander around with the droid in the ship. Chopper had ratted him out. And Kanan did not seem happy to find him in his quarters.

Not the answer you're looking for? Browse other questions tagged star-wars languages or ask your own question.

113
Why Can't R2-D2 Talk?
5
Is there a canonical textual representation of Binary?
19
How many R2 droid units were there according to canon?
3
Lightsaber canon reference
6
Is there a guide to Orkan language?
32
Why would the binary language of moisture vaporators be that different from the binary language of other machines or droids?
5
Is Shyriiwook still the name of the Wookiee language in Disney canon?
3
Does Leia understand the Binary Language of droids?