What separates a cyberpunk setting from a futuristic setting?

I understand this is a commonly used style in science-fiction. However, I can never determine the difference between what some call a "futuristic" setting and a "cyberpunk" setting.

Cyberpunk is often described as "high tech and low life" - a dystopic world, in which hyper-capitalism (or the corporate state) has created a tiny upper class and a massive, disenfranchised lower class. This lower class is inhabited by sleazy characters who have limited access to the technological advances that have benefited the upper class, and so the poor masses are forced to find their own improvised versions of these tools. These improvised resources generally include jury rigged cybernetic enhancements, which is where the "cyber" part of "cyberpunk" comes from.

Futuristic is what it says: the future. It has the "high tech" aspects, in most cases, but not necessarily the "low life" part.

To get a feel for the difference, compare the cyberpunk setting of Blade Runner to the futuristic setting of 2001: A Space Odyssey. The former is full of shady characters, poverty, and grime - it is both futuristic and cyberpunk; the latter is pristine, elegant, and sterile - it is futuristic but not cyberpunk.

Note: Almost all cyberpunk media is futuristic, but most futuristic media is not cyberpunk.

cy·ber·punk
ˈsībərˌpəNGk
noun
a genre of science fiction set in a lawless subculture of an oppressive society dominated by computer technology.

But more detail is necessary to really convey the idea:

Cyberpunk literature, in general, deals with marginalized people in technologically-enhanced cultural 'systems'. In cyberpunk stories' settings, there is usually a 'system' which dominates the lives of most 'ordinary' people, be it an oppressive government, a group of large, paternalistic corporations, or a fundamentalist religion.

These systems are enhanced by certain technologies (today advancing at a rate that is bewildering to most people), particularly 'information technology' (computers, the mass media), making the system better at keeping those within it inside it.

Often this technological system extends into its human 'components' as well, via brain implants, prosthetic limbs, cloned or genetically engineered organs, etc. Humans themselves become part of 'the Machine'. This is the 'cyber' aspect of cyberpunk.

However, in any cultural system, there are always those who live on its margins, on 'the Edge': criminals, outcasts, visionaries, or those who simply want freedom for its own sake. Cyberpunk literature focuses on these people, and often on how they turn the system's technological tools to their own ends. This is the 'punk' aspect of cyberpunk."
- Erich Schneider

The main features of cyberpunk [include a] shift from classic science fiction’s robots and spaceships to cybernetics and biotechnology. [A] combination of technoscientific themes and urban subcultures inspired by a punk sensibility, its focus on invasive technologies and its dystopian depiction of a junk-infested world of losers and loonies. - Dani Cavallaro, Cyberpunk and Cyberculture

Definition - What does Cyberpunk mean?

Cyberpunk is a science fiction genre in which the future world is portrayed as one in which society is largely controlled by computers, at the expense of daily life and social order. ...Rebellion against large corporations and established organizations is a key aspect of cyberpunk. As such, main characters are often portrayed as alienated and marginalized by society.

Cyberpunk portrays a rapid deterioration of societal norms due to an inevitable shift toward the all-out use of computers, so much so that the lines between actual human beings and computers become blurred. Big corporations are often thrown into the mix as the culprit and the host for the dystopia that is cyberpunk.

Cyberpunk settings are typically focused in the not-so-distant future in a setting of societal breakdown where computers are allowed to control everything. This is essentially a technology-gone-wild scenario.
- Technopedia

Classic cyberpunk characters were marginalized, alienated loners who lived on the edge of society in generally dystopic futures where daily life was impacted by rapid technological change, an ubiquitous datasphere of computerized information, and invasive modification of the human body.
- Lawrence Person

Cyberpunk's protagonists are hackers, rockers, and other cultural rebels, clinging to a cult of individualism in a culture characterized by corporate control and mass conformity. These protagonists are adept at appropriating the materials of popular culture and making them speak to alternative needs and interests; they also know how to tap into the vast digital database to access information about corporations and their secret conspiracies, or to spread resistant messages despite powerful mechanisms of top-down control.
- Source

[The Cyberpunk] genre, pioneered by sci-fi authors including William Gibson, Tim Powers, and Neal Stephenson in the 1980s, provides vivid visions of a bright and fast (or broken and dystopian) cybernetic future - and tells the stories of the people trying to make their way through this new technological world.
- Carnegie Library of Pittsburgh's "High Tech, Low Life: A Cyberpunk Booklist"

We can break down a basic definition of cyberpunk by dissecting the word itself. Cyber refers to technology, and is most often associated with cyberspace (this word was originally coined by William Gibson himself), and cybernetic enhancements to the body. But this can can also refer to other technologies such as biotechnology and nanotechnology for instance.

Punk, on the other hand, refers to the people and the attitude that cyberpunk has. Protagonists in cyberpunk tend to be outsiders, anti-heros, outcasts, criminals, visionaries, dissenters, and misfits. The underlying aspect that applies to all of these groups is their subversive nature.

There are a number of quotes that help to illustrate the essence of cyberpunk:

“The future is already here — it’s just not very evenly distributed.”
– William Gibson [who coined the phrase "Cyberspace",and who is credited with inventing the Cyberpunk genre]

This quote puts the cyber/punk and the “High Tech, Low Life” dichotomy into context. There exists today high technology, but this technology has failed to erode away social divisions leaving a disparity between the classes which leads to social strife. In addition, although this technology exists the low class does not have the means by which to benefit from it, thus widening the divide as the rich elite get richer and thus have more access to technology.

“The street finds its own use for things.”
- William Gibson

This gets down to the punk/low life aspect of cyberpunk and puts it into the context of the open source, maker, and DIY movements. The rate of technological development is so fast that we generate a lot of stuff that is just there, and obsolete. These things lose their perceived value and are discarded, but then this refuse can be repurposed and used in ways that the original creators never would have imagined. Like using a DVD player to test for HIV.

Cyberartsweb's article "Defining Cyberpunk" is an excellent resource for further information. I'll quote some of the more concise points here:

Post-humanism is probably the most obvious component of cyberpunk. The stereotypical cyberpunk novel is positively dripping with chromed artificial limbs, bizarre prostheses used to ill ends, crazed artificial intelligences run amok. The concept is more subtle than that, however. The underlying aesthetic is often one of transcending the flesh; all the rest is just surface glitter and means to that end. The methods of transcendence can be mundane; drugs are an amazingly prominent feature of many cyberpunk books. They can be exotic; Neuromancer's Case jacks into the Matrix not just for work, but for liberation from the "meat"--the ability to play unfettered in a purely mental arena, a "consensual hallucination."

Post-industrialism could also be thought of too-late capitalism. It is perhaps most finely represented in Neal Stephenson's Snow Crash, in which America leads the world in only three industries: movies, computer code, and speedy pizza delivery. Service industries and software remain, but in a future transformed by telepresence, when the Net makes telecommuting as common as the streetcar and the highway made commuting, who needs factories? Nanomachines can build it cheaper and better. If you're positing a world without nanomachines, you can always have it built somewhere cheap and dirty, by disposible laborers held in serf-like bondage. Bangkok, perhaps, or Newark. Life is cheap; information is dear.

Finally, most cyberpunk literature is dystopian. Often, a war or catastrophe has occured in the backstory, prior to the beginning of the plot. If a war, it was most likely not a success; America in cyberpunk is often a beleagured country. Whether through a disaster or simply the unending tide of technological change (the erosion of borders predicated by the development of the net, e.g.), the general assumption is that the nation as we know it is an endangered species. The positions of the Third World and the First World--with the rise of post-industrialism--are often reversed or muddled. Islands in the Net's Jamaica is on the cutting (and somewhat shady) edge of technological development; George Alec Effinger's A Fire in the Sun shows a Muslim world in which America's remnants aren't even worth thinking about.. The orbital society (technocratic, often corporate, usually technologically advanced far past the world down the gravity well) is a fairly common trope. Walter John Williams' Hardwired posits a war with orbital corporate nations, a war which the now-Balkanized America lost. There is a deep uneasiness with what the future will do to the current conception of the nation-state.

The most common prediction is the rise of the corporate state. The Corporation can harness the forces of the market, serving its employees/citizens in a way that the castrated nations of the cyberpunk world cannot. Similarly, in a world devoid of national protections, the Corporation can both serve as an enforcer of laws (as in the burbclaves of Snow Crash) and an exploiter of the power vacuum. Williams uses the term policorporate, a political-business entity that cocoons its workers in every aspect of their lives. This, too, is one of the reasons that so many heroes are criminals. When the state is the Corporation, mother and father and Big Brother rolled into one, what choice does the strong individual have to rebel? 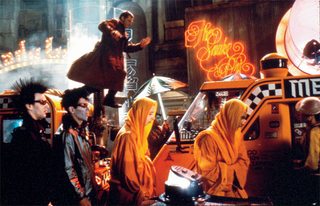 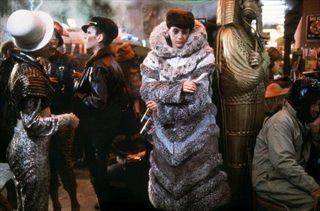 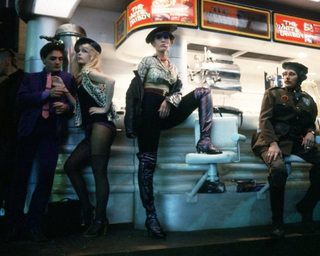 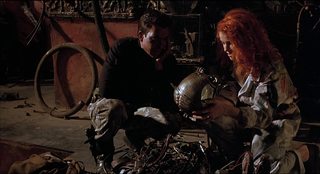 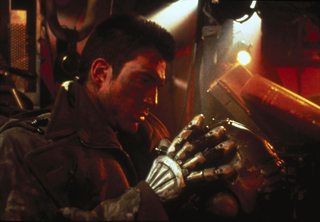 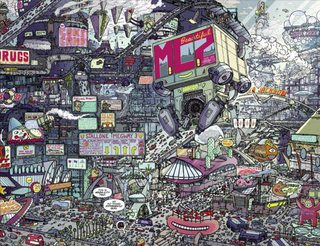 This is much more straightforward. From the Oxford Dictionaries:

Having or involving very modern technology or design:

(Of a film or book) set in the future, typically in a world of advanced or menacing technology.

So "futuristic" is usually "high tech", but not necessarily "low life". Although all cyberpunk is futuristic, most futuristic stories aren't cyberpunk. 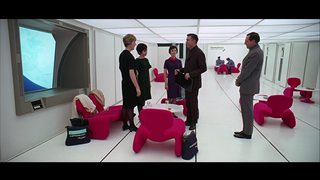 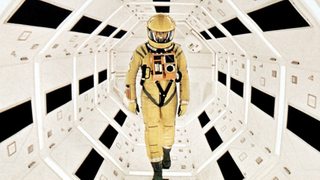 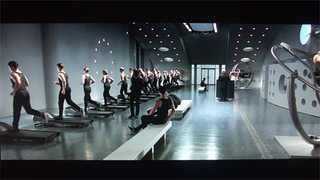 Cyberpunk as a Science Fiction Genre: The Cyberpunk Project

A Very Short History of Cyberpunk

Not the answer you're looking for? Browse other questions tagged science-fiction-genre terminology cyberpunk or ask your own question.

32
Is there a difference between a parallel universe and an alternate universe?
11
Cyberpunk scifi book from the early 90's
7
What trilogy of books is about a family of genetically altered children who grow up to take over the government?
5
What is the genre of fantasy stories that take place in a science fiction universe?
4
Is there a name for the style/genre of Sci-Fi using floating, illuminated technology elements?
18
Does cyberpunk exclude interstellar space travel?
9
On the words "science fiction" and "scientifiction"