Where were the Knights of Ren during the events of The Force Awakens?

As far as I know:

we only see them in one brief flashback. 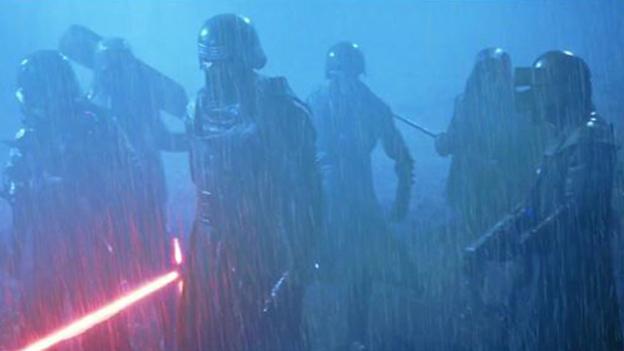 Did they play any significant role off camera, or in a deleted scene perhaps?

Are they even still alive?

At the end of the film, Supreme Leader Snoke instructs General Hux to find and return Kylo Ren so that Kylo

"...can complete his training."

Earlier in the film, Snoke calls Kylo the

If Kylo still needs training and he is in command of the Knights of Ren, it is logical to conclude that the rest of them are also in training during the film's events.

Nobody knows. Expect this to be answered in one of the many future Star Wars-movies. Slashfilm delves into this as one of "26 Unanswered Questions of ‘Star Wars: The Force Awakens’":

In Rey’s vision/flashback, we see Kylo Ren destroy Luke Skywalker’s new Jedi Academy with “the Knights of Ren.” But who is this organization? The only thing J.J. Abrams has said on record about the group is this:

He is a character who came to the name Kylo Ren when he joined a group called Knights of Ren.

It does seem the organisation does not exist anymore at the time of TFA, depending on how you interpret Adam Driver's words when he says "It was a group":

Adam Driver gives a little more insight to the LATimes:

It was a group that existed before him, that he was a part of. Their place within everything is maybe more of a satellite group than I would say … This is really tricky.

However, judging from what Star Wars: The Last Jedi director Rian Johnson said in an interview on the Empire podcast (as transcribed by io9), the Knights appear to still be alive:

In Star Wars: The Force Awakens, we got a teaser for Kylo Ren’s team of Sith wannabes, the Knights of Ren. Several fans figured Kylo’s posse would play a big role in The Last Jedi. But lo and behold, apart from that one scene where Luke explained the tragedy that had befallen him and Ben Solo, the Knights of Ren were nowhere to be found.

In an interview on the Empire podcast, Johnson explained his reasoning: the movie was already stuffed to the brim with plots and characters, and he didn’t really have anything for the Knights of Ren to do. Besides, the most likely option he saw would’ve resulted in their premature deaths.

I guess I could’ve used them in place of the Praetorian guards but then it would feel like wasting them because all those guards had to die. And if Kylo had some kind of connection to them it would’ve added a complication that wouldn’t have helped the scene… Truth is, I just didn’t see a place for them in the movie.

Most likely we will learn more about them in Star Wars IX which is scheduled for release on December 20, 2019.

34
I was told that “Kylo Ren” was his rank and order (i.e. Kylo means captain or similar) but I can't find a ref. Is it true?
15
Is there any knowledge on who the six other members of the “Knights of Ren” are?
9
Why is Kylo Ren separated from the other Knights Of Ren?