Has Han met a Wookiee aside from Chewbacca?

In Star Wars: A New Hope, Han famously makes a comment about Wookiees ripping people's arms off. This got me to thinking whether this was a reasonable generalisation. Has Han Solo ever met another Wookiee aside from Chewbacca? Canon preferred but Legends is acceptable,

In the Star Wars Holiday Special Han Solo meets several members of Chewbacca's family, and actually participates in a large Wookiee ceremony with dozens if not hundreds of other Wookiees.

While this takes place after a New Hope, Solo is very familiar with the planet suggesting he'd been there before. Additionally, since this is Chewbacca's family, it seems reasonable that Solo had met them early in his relationship with Chewy.

I'm not sure if the Holiday Special counts as canon, but it certainly has all the original actors. Now, whether or not you want to scar yourself by watching it is another matter.

Yes, but after A New Hope 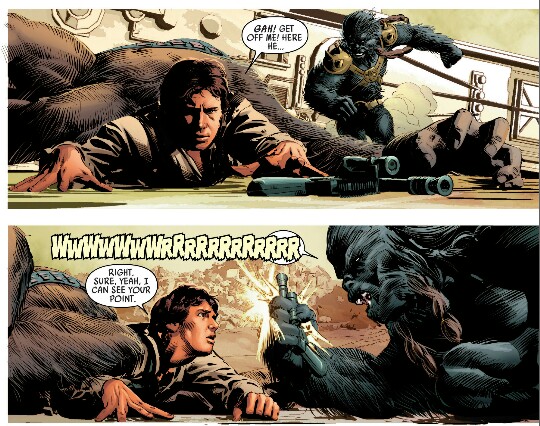 While this comic is considered canon, it takes place after A New Hope, so it won't help explain Han's comment.

His relationship with her while being a juvenile criminal on Shrike’s crew is described in Han Solo trilogy by Crispen (especially, Paradise Snare).

In the book, while helping Han escape Trader’s Luck, she broke Larrad Shrike’s arm easily, but in that fight was mortally wounded, which cemented his warm feelings towards Wookiees and ensured he would be set upon his path when he met Chewbacca as an Imperial slave.

His words had no more effect than Han’s. Dewlanna’s blood was up—she was in full Wookiee battle rage. With a roar that deafened the combatants, she grabbed Larrad’s wrist and yanked, spinning him around and snapping him in a terrible parody of a child’s “snap the whip” game. Han heard a crunch, mixed with several pops as tendons and ligaments gave way. Larrad Shrike shrieked, a high, shrill noise that carried such pain that the Corellian youth’s arm ached in sympathy.

As this answer explains, in the novel Star Wars - Journey to The Force Awakens: Aftermath by Chuck Wendig1, Han and Chewie travel to the Wookiee homeworld of Kashyyyk and liberate it from Imperial control. It is all but impossible to imagine anyone going to a Wookiee planet and failing to meet at least a few Wookiees. Furthermore, Han specifically mentions that they should contact a group of a half dozen Wookiee refugees, including Roshyk, Hrrgn, and Kirratha. It's pretty clear that he and Chewbacca already know these six Wookiees, at the very least.

"We've got an opportunity with a very small window."

Chewie gurgles and Han agrees: "Imra, like you said: I'm out of that life, so whatever it is you're bringing to me-"

She disappears and a new holo-image pops up: a planet...

A planet where Wookiees are still in thrall to the Empire...

"They're gonna do... who can say? A changing of the guards or something. Or they need ships for some planet or some other - I really don't know, Solo. The details are fuzzy, but what we do know is, the ships that are leaving won't immediately be replaced. Which means we have a few days."

Chewie raises his head back and howls...

"The Alliance - the New Republic, whatever they are - they got me on this thing. I've got a responsibility. I can't just change the plan and go off half-cocked...." And he knows what the New Republic will say. They have a strategy. They won't divert attention to Kashyyyk, not yet. He's asked. More than once.

Chewie is giving him this look. Not even making a sound. The Wookiee's chest is rising and falling.

And it hits Han: The words coming out of his mouth don't sound like him. Being out here, though, with Chewie, it's made him feel like he used to. They'd just go places. Do whatever they wanted. Follow their noses to drink and contraband and stacks of credits and whatever good or bad deeds came along.

A fire lights in Han's belly.

"Get everybody. Every right-thinking scamp, scoundrel, slicer, smuggler - anybody who owes me a favor. Anybody who hates the Empire like we do."

He turns to Chewbacca: “Hey, pal. You still know how to contact the other refugees? Roshyk, Hrrgn, Kirratha, and them?” Group of a half-dozen Wookiees who escaped Kessel and got away from the Empire when nobody else could. Group of the meanest, hairiest brutes. They’re mercenaries now, and they don’t have much care in them when it comes to the politics of the New Republic, but they damn sure will care about liberating their home.

Chewie nods and growls in assent.

"Good. Get ’em together. And, Imra, you get the rest. Tell them to meet us outside Warrin Station. Like, now. Hell, yesterday. We don’t need the Alliance or the Republic. We do this our way.”

The Wookiee pumps his long arms in triumph. Imra gives her word, and then she’s gone.

“We don’t have any plan, pal,” he says. The Wookiee growls.

“We’re making this up as we go.” Chewie nods and ululates.
- Star Wars - Journey to the Force Awakens: Aftermath

1Poorly written - very poorly written - but canonical nonetheless, this story takes place in the months following the Battle of Endor, the destruction of the second Death Star, and the death of Vader and Palpatine

6
When did Han and Chewbacca liberate Kashyyyk?
4
Which named characters have gotten their limbs torn by Wookiees?

36
How did Han Solo meet Chewbacca?
5
Old Han Solo and Chewbacca novels
24
Has Chewbacca ever ripped anyone's arm off?
65
Toilets in the Star Wars galaxy
33
Why doesn't Chewbacca learn to speak Galactic Basic?
6
When did Han and Chewbacca liberate Kashyyyk?
33
Did Obi-Wan ever pay Han Solo? If so, where did he get the money?
4
Whose arms would Chewbacca have ripped off?
-1
Technically speaking, was the Millennium Falcon ever used for piracy?