Where's Vader's mask at the end of Force Awakens?

It sounds like Kylo Ren lost his own mask at the end of Force Awakens, he took it off for the climatic scene in which he faces Han and

several stormtroopers are shot by a furious wookie

...which I think is a nice little symbolic irony, given that he thought he was eliminating the vulnerable, human, "Ben" side of himself to finally become the masked villain of his dreams. Similar to how, apparently, in the novel, he's described as expecting this scene to make him stronger, but it actually made him weaker.

But that mask is replaceable (presumably).

We know that, at the end of the film, Hux has to... [technically this is probably a spoiler for the next film if you've only seen the film, but it's no great surprise]

find and rescue Kylo, who is incapacitated, just before the planet explodes.

What about Kylo's comforter Darth Vader's mask? It doubtless wouldn't have been a priority for Hux. Where was it exactly, and was it also destroyed? I don't remember seeing anything in the film that confirmed its location (maybe I missed something, I only saw it once).

It'd be a great irony if, while trying so hard to become the new Vader, Kylo actually lost his treasured connection with Vader. Is anything known or confirmed, either in Force Awakens or its supplementary material?

The mask of Darth Vader is very likely still aboard the Finalizer.

In the film, we see Kylo Ren meditating in the presence of Darth Vader's mangled helmet in his quarters aboard the Finalizer, the First Order's Resurgent class flagship Star Destroyer. We did not see him take the helmet to Starkiller Base. 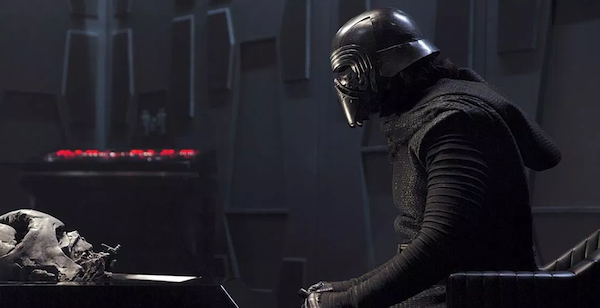 There is a ritualistic aspect to this. Kylo asks of Vader,

"Show me again the power of the darkness..."

Kylo seems to regularly commune with Vader's mask, as a way of ensuring that he doesn't fall back to the Light.

Familiarity and structure are important elements of ritual, and so he probably keeps Vader's mask in his quarters on the Finalizer at all times.

For this reason, I suspect that the helmet is safe and sound on the Finalizer.

Not the answer you're looking for? Browse other questions tagged star-wars the-force-awakens darth-vader or ask your own question.

12
How does General Hux find Kylo Ren in time?
11
What happens to Kylo Ren's mask at the end of the movie?