What system is the planet at the end of Force Awakens in?

Do we know what system the planet Rey finds Luke on is in?

The planet is called "Ahch-To". The name of the system hasn't been revealed, but since Tatooine is in the "Tatoo system", Dantooine is in the "Dantooine system", and Alderaan was in the "Alderaan system", it might well be the "Ahch system" or "Ahch-To system"

From the leaked WGA script:

The Millennium Falcon FLIES INTO VIEW, BANKS towards one of the ISLANDS.

Rey arrives at a clearing. Small, modest, primitive stone structures. But no one around. Rey walks past them, sees, senses no one.

And then she stops. Feels something. She turns. Standing forty feet away from her, his back to us, is a MAN, in a CLOAK AND ROBE.

Rey stares, knowing exactly who it is. But she just stares for what seems like forever. Until he finally TURNS, SLOWLY, to her. Pulls back his hood.

IT IS LUKE SKYWALKER.

So if you can see the WGA script, yes, the name of the planet from the end of the movie is there. 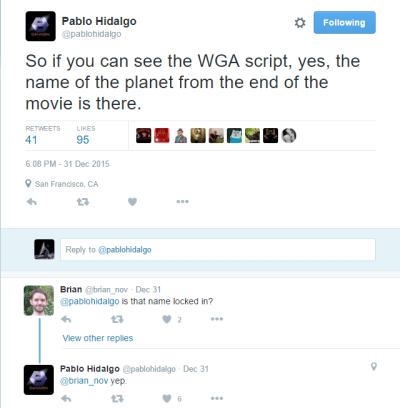 As does Star Wars: The Force Awakens: The Visual Dictionary, and - as seen in this picture - Star Wars: Rey's Story: 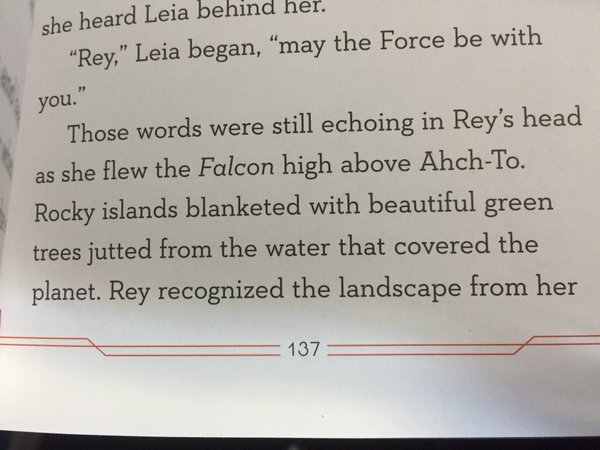 Those words were still echoing in Rey's head as she flew the Falcon high above Ahch-To... Rey recognized the landscape from her dreams.

The tie-in novel The Force Awakens: Rey's Story indicates that the planet is called Ahch-To.

Those words were still echoing in Rey’s head as she flew the Falcon high above Ahch-To. Rocky islands blanketed with beautiful green trees jutted from the water that covered the planet.

5
What is the name of the planet that Luke Skywalker is on at the end of Star Wars 7?