Is Anakin's lightsaber the only one remaining from the 'Clone Wars' era?

In discussions and info surrounding The Force Awakens, it seems that a lot of the (now ancient) Jedi knowledge has been lost to time. Luke's Green lightsaber used a synthetic crystal, a practice usually resigned to Siths, and is said to be more cruder in design than the original ones. Likewise, Kylo Ren's lightsaber is said to be impure, primitive, and using a cracked crystal, resulting in a distorted blade with the need for side vents (the crossguards).

Of course, leading up to the end of the Clone Wars, most of the Jedi seem to have been wiped out, and, given Palpatine actively worked to erase all existence of the Jedi from public, one can assume that most of their weapons also followed suit. But do we know of any that have survived until the time of the Force Awakens? Other than Anakin/Luke/Rey's of course.

The only lightsabers I can remember from the original trilogy are:

Are there any other lightsabers that may have survived the Clone Wars and made it to the 'First Order' era?

Luke meets a Rodian named Soonta, who's uncle, Huulik, was a Jedi who fought with Kenobi during the Clone Wars. She tells Luke:

Like your father, he was betrayed. He was shot by his clone troopers who were supposed to be on his side. He made it into his ship, recorded a brief message about what happened to him with his astromech, and gave it orders to bring him back here.

Later - she takes Luke to Huulik's grave where he retrieves his lightsaber with her permission.

Huulik's lightsaber was designed for a Rodian hand and wasn't quite comfortable in my fist...it ripped into life and thrummed with energy, a brilliant amethyst blade.

The currently running Marvel comics 'Star Wars' series, set between episodes IV and V, features Grakkus the Hutt, a collector of Jedi artifacts on Nal Hutta (in issues 8-12). In his collection are numerous lightsabers, at least some of which are seen to be in working order. They've not been shown to have been destroyed in any way since that appearance.

Some (hopefully not too spoiler-y) pictures: 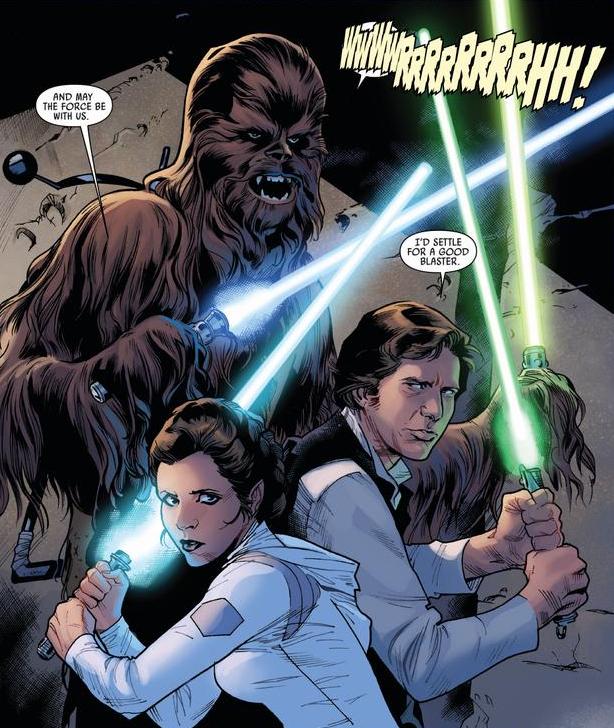 There were hundreds of light sabres in the prequel trilogy, and it seems statistically unlikely that they were all destroyed in the five decades between Revenge of the Sith and The Force Awakens. I'm not aware of Order 66 stating that light sabres were to be destroyed along with their owners.

57
Why does Kylo Ren's lightsaber look different from normal lightsabers?
28
Why did Luke use a synthetic crystal in his lightsaber and what were the implications of this choice?
9
Why aren't (ex-)Jedi lightsabers more common?

31
Why do the Sith use red-colored lightsabers, but the Jedi don't?
20
In Star Wars: "The Force Awakens," how could this lightsaber have turned up where it did?
29
When does Luke's lightsaber first appear in the Star Wars saga?
20
What color is Luke’s lightsaber blade?
8
Are actual lightsaber crossguards effective?
12
Could Kylo Ren's lightsaber contain the Kyber crystal from Vader's lightsaber?
20
Why was the colour of Luke's lightsaber changed from blue to green between the trailer and the release of Return of the Jedi?
22
Why isn't Luke's lightsaber red?
14
Do Jedi knights take the lightsabers of enemies they have defeated?