Did Padmé have any family?

I can guess the genuine answer for this is “the prequels make no sense”, however I'm wondering if there's an in-universe answer.

At the end of Revenge of the Sith we see Luke get sent to his step uncle, and Leia adopted by the first person to put their hand up to have her. (A politician who no-one ran any background checks on, and no alarm bells were going off!)

I have a few problems with this. On the surface Leia got the best deal out of this, a life of luxury and space travel, whereas poor Luke got stuck in a desert, not allowed to join the academy and drinking blue milk.

Obviously it makes sense to split the two children, but did Padmé not have any family one of them could have gone with? She obviously had the family villa in Italy and seemed very well-respected and loved by her fellow Nabooians, hence the rather large funeral.

I can't believe her friends/family didn't know she was pregnant, or that with Coruscant’s fantastic medical care, questions weren't raised about whether children survived. (Cue a rather well-off angry old Naboo couple starting an investigation to find their missing grandchild, claiming it's a conspiracy).

So I suppose a TL/DR: did Padmé have any family? If yes, why didn’t one of the children go with them?

Although most of what has been written about these characters' back story is not canon, they do however exist in canon. Padme's parents are Jobal Naberrie and Ruwee Naberrie.

Padme changed her name to Amidala when she became Queen, and thanks to scott.korin's comment it appears that this is a tradition.

According to the novelization, the Organas were struggling to have a child at the time of Padme's death. It appears that they were blessed to adopt her:

“I can …” Bail Organa stopped, flushing slightly. “I’m sorry to interrupt, Masters; I know little about the Force, but I do know something of love. The Queen and I-well, we’ve always talked of adopting a girl. If you have no objection, I would like to take Leia to Alderaan, and raise her as our daughter. She would be loved with us.”

Yoda and Obi-Wan exchanged a look. Yoda tilted his head. “No happier fate could any child ask for. With our blessing, and that of the Force, let Leia be your child.”

So it seems that the remaining Jedi council were principally responsible for the fate of Luke and Leia, which is understandable because they were likely huge targets for the Empire should it become common knowledge. It's possible that the Jedi had chosen the safest possible places for each child, and the Naberries didn't have the necessary environment to be able to protect either of them (although this last bit is pure conjecture based on my own thoughts).

Discussion in this other question suggests that it was actually the purpose of the Jedi to place Leia in a position where she could be aligned with the Empire, but very easily be "activated" at a later date, even if it didn't happen per se. 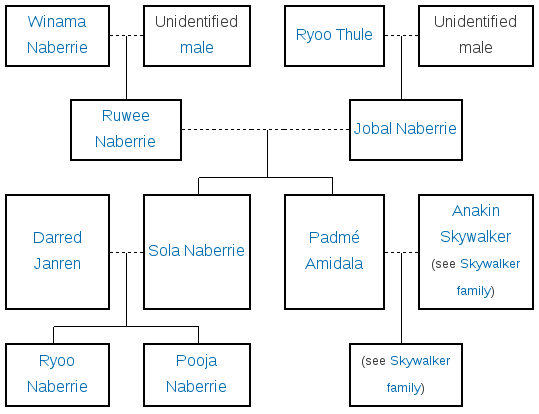 As to whether Padmé had a family, the answer is a firm yes.

Her parents and family are mentioned in both the Attack of the Clones novelisation and the original film script.

“No, but I-” the distracted Anakin started to answer, but he was interrupted by the squeals of two little girls, running out from the yard toward his companion.

Padmé’s smile went as wide as Anakin had ever seen it and she rushed ahead, bending low to scoop the pair, who looked to be no more than a few years old, one a bit taller than the other, into her arms. One had hair short and blond and curly, the other, the older of the two, had hair that resembled Padmé's.

“Ryoo! Pooja!” Padmé cried, hugging them and twirling them about. “I’m so happy to see you!” She kissed them both and set them down, then took them by the hand and led them toward Anakin.

Not exactly like Padmé, Anakin noted. She was a little older, a little heavier, and a little more… worn, was the only word he could think of. But not in a bad way. Yes, he could see it now, he thought, watching as she and Padmé hugged tightly. This was whom Padmé could become-more settled, more content, perhaps. Considering the amazing resemblance, Anakin was hardly surprised when Padmé introduced the woman as her sister, Sola.

“Mom and Dad will be so happy to see you,” Sola said to Padmé. “It’s been a difficult few weeks.”

The next introductions were a bit more uncomfortable, but only for a moment, as Padmé showed Anakin to Ruwee, her father, a strong-shouldered man with a face that was plain and strong and compassionate all at once. He wore his brown hair short, but still it was a bit out of place, a bit… comfortable. Padmé introduced Jobal next, and Anakin knew that the woman was her mother without being told. The moment he met her, he understood where Padmé had gotten her innocent and sincere smile, a look that could disarm a mob of bloodthirsty Gamorrean raiders. Jobal’s face had that same comforting quality, that same obvious generosity.

There were even scenes filmed (that were ultimately deleted) in which we meet her extended family and learn more about Padmé's midriff household.

When it comes to the question of why her family didn't come looking for her children, the simplest answer is that after her death, her corpse was arranged to look like she was still pregnant. According to the Star Wars Episode III: Visual Dictionary, her parents and sister were informed of her death but no further investigation (or official autopsy) was carried out on the planet due to Naboobian tradition.

In the DVD extras (you can find some compilations like "15 minutes you did not know exist in Episode X") there are lengthy scenes about Anakin's visit to Padme's family as a Jedi bodyguard and suspect-boyfriend.

I guess, given the circumstances of her death, it was not hard to announce (or Force-convince) that the child died and was lost on the volcano planet... not sure if anyone knew twins were underway, and records (if any) might be altered. It might be announced a miracle that HER body was found and recovered so as to bury something. In military tradition, might as well be an empty zinc box.

Sending Luke or Leia to Padme's family would have aroused more suspicion as to their true identity than to a stranger. They were lucky Vader did not suspect that his children might have survived (especially as Padme had a public funeral). I have thought that sending Luke to his family was dangerous, but that would still not have been noticeable to the wider empire due to their low profile and weak ties to Vader.

28
Was Padmé made to still appear pregnant for her funeral?
36
Why did Obi-Wan allow Leia to get adopted by such a high profile figure?
13
Who delivered Amidala's body back to Naboo?

28
Did Yoda definitely know who the other hope was?
23
When and how does the Emperor learn that Luke is Vader's son?
19
Are there any new Disney-era examples of Leia actively using the force? (Not passively sensing things)
18
Why didn't Vader detect the Force in Leia?
5
Did Vader love Luke (and Leia?)
10
Which of these two events happen earlier?
11
Prior to Cloud City, did Vader know that Han and Leia were "friends" of Luke?