Was Severus Snape based on a real person?

After the recent death of the much-loved actor Alan Rickman, it occurred to me to wonder:

was the character of Severus Snape based on any real-life person?

We know that JKR specifically chose Alan Rickman to play Snape, but that answer doesn't say whether this choice was wholly due to his undoubted aptness for the role, or whether he bore some physical resemblance to the way she'd imagined Snape.

Apparently, the answer is simple and quite unsurprising:

From this article about John Nettleship, who died of cancer in 2011 aged 71:

"The first I knew was when a reporter from a national newspaper knocked on the door seven years ago and said: 'You're Professor Snape aren't you'," said the former head of science.

"I suppose I was quite strict as a teacher, but I said to my wife, 'she thinks I'm Professor Snape'. She said 'of course you are, but I didn't want to tell you'.

"Fortunately for me, quite a lot of people like Alan Rickman, who plays Snape in the films."

And he does look a bit like Alan Rickman, minus the curtain of dark hair: 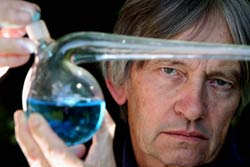 The connection has been more or less confirmed by JKR, who said (emphasis mine):

OK. Snape is the - er - very sadistic teacher loosely based on a teacher I myself had, I have to say. Erm .. I think it ... Children are very aware - and we ... we're kidding ourselves if we don't think that they are - that teachers do sometimes abuse their power and this particular teacher does abuse his power. He is not a - he is not a particularly pleasant person at all. However, everyone should keep their eye on Snape, I'll just say that, because there's more to him than meets the eye, and you will find out part of what I'm talking about if you read book four.

This quote says Snape was definitely based on one of JKR's teachers. A chemistry teacher would make sense (chemistry ~ Potions), and coupled with the above quotes about John Nettleship and his vague resemblance to Alan Rickman (look at those cheeks and that mouth!), I think we have enough evidence to conclusively say JN -> SS. QED.

No, he was not based on a real person.

Rowling states this categorically in a 2004 interview

Are any of your characters based on real people?

I have only once set out to depict somebody I have met and, unlikely though it might seem, the result was Gilderoy Lockhart.

See also Who is Gilderoy Lockhart based on?

Not the answer you're looking for? Browse other questions tagged harry-potter severus-snape inspiration or ask your own question.

68
Was the casting of Alan Rickman as Snape based on the full knowledge of the future of that character?
31
Who is Gilderoy Lockhart based on?
4
Which characters in Harry Potter are based on real people?