Why does Rey wear the same outfit in different environments?

In Star Wars: The Force Awakens, Rey can be seen wearing the same outfit wherever she goes. She wears it on a desert planet: 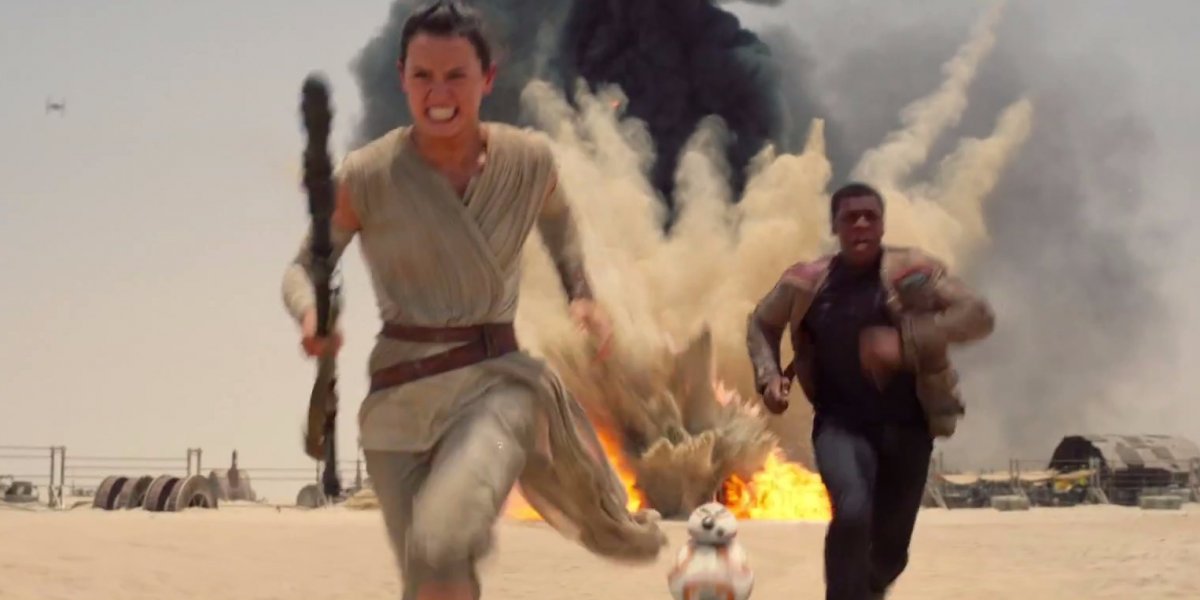 On an ice planet: 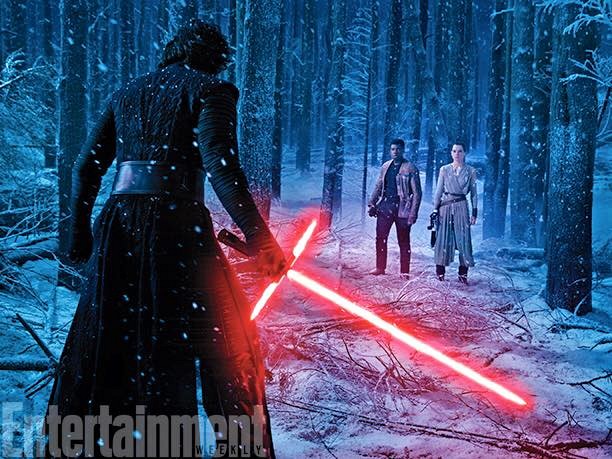 On a jungle planet: 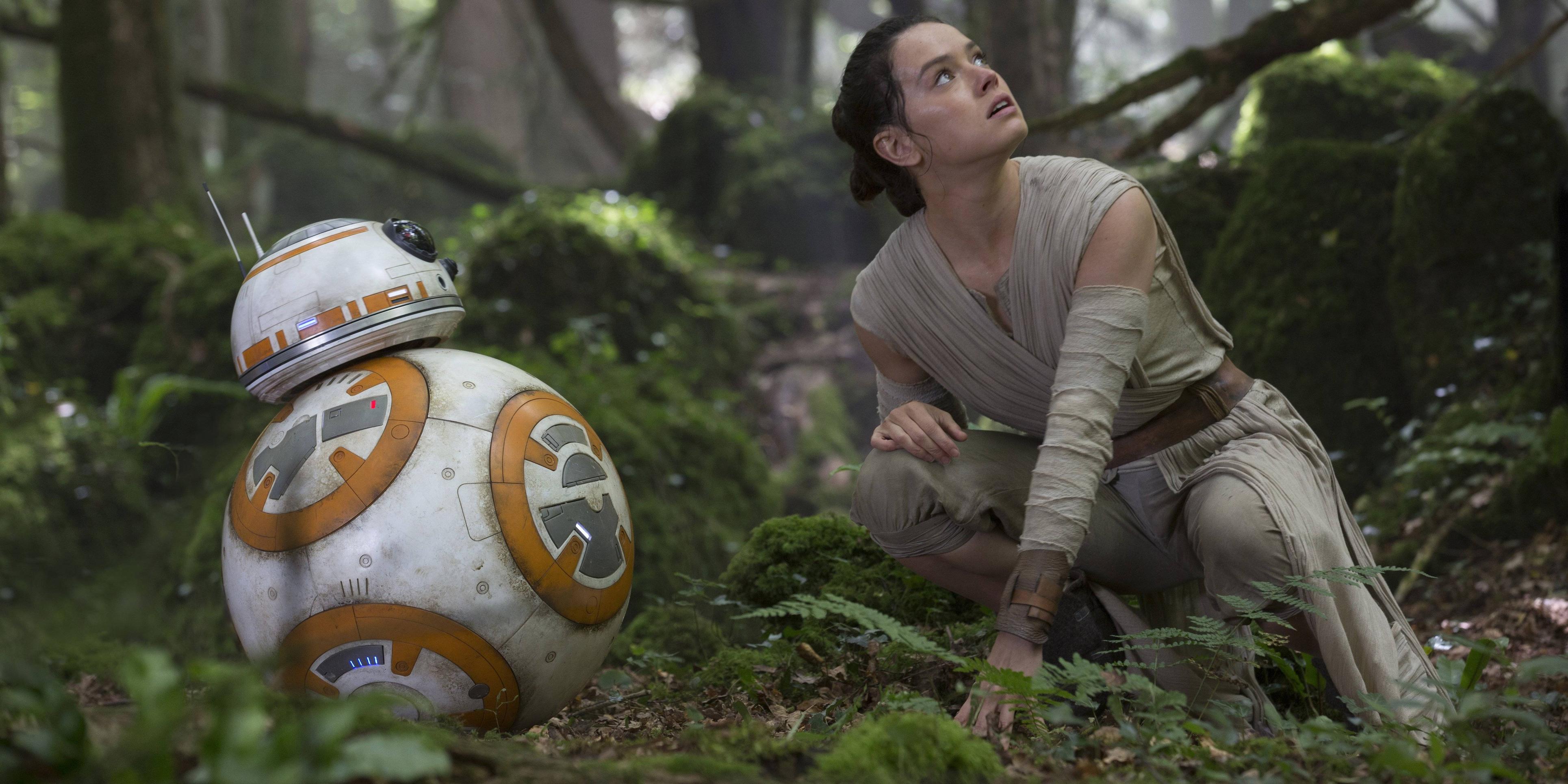 Why is this? Shouldn't different environments require different clothes?

Why does Rey wear the same outfit in different environments?

I'm not aware of an explicit answer in the movie or the novelization, but it seems pretty self explanatory to me:

So she might have owned only one outfit in the first place, she didn't have a chance to buy or find more clothes until after she returned from the Starkiller base, and she had had other things on her mind the whole time until then.

On a side note, Han wears his white shirt, black vest, and striped blue pants throughout much of Episode IV, and Chewbacca hasn't changed his clothes (i.e., his bandolier and messenger bag) since the Clone Wars, so Rey's failure to change her outfit isn't particularly unusual... And Vader and the Emperor have been wearing the same thing since the end of episode III. Come to think of it, the Jedi wore the same robes every day for as long as they lived. I guess the galaxy far, far away has some very advanced deodorant.

The canon answer (offered by the Force Awakens: Visual Dictionary) is that Rey was simply too busy saving the whole.damn.galaxy to think about changing her outfit. When she arrives at the Starkiller Base she briefly borrows Finn's jacket (seen in the deleted scene pictured below) but just shrugs off the discomfort in order to get on with her mission. 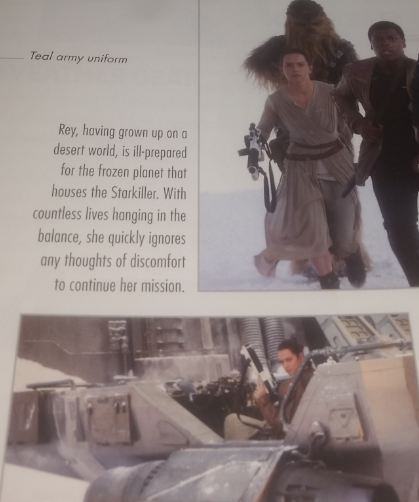 Then, when she gets a few minutes to spare, she changes her outfit (and hopefully has a shower) before meeting Luke. 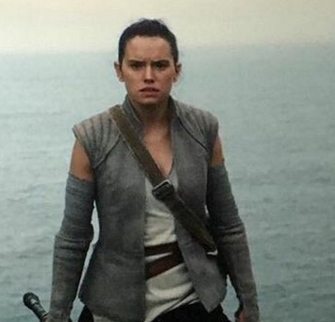 I'm coming late to the party here, but there's one fact everyone else seems to have overlooked:

deserts can be freezing cold at night.

Some desert locations consistently experience very high temperatures all year long, even during wintertime. These locations feature some of the highest annual average temperatures recorded on Earth, averages which can exceed 30 °C (86 °F). This last feature is seen in some parts of deserts of Africa and Arabia. During colder periods of the year, night-time temperatures can drop to freezing or below due to the exceptional radiation loss under the clear skies.

So the clothing Rey is used to wearing on a desert planet should be such that she can cope with wearing it both in conditions of extreme heat and in those of extreme cold. It makes sense that such a versatile garment would also do her just fine on an ice planet and even perhaps a jungle planet (although humidity is the one thing desert garb might not be able to take).

Also, as pointed out by other users, she's tough and isn't going to let a little thing like uncomfortable temperatures get in her way. This is a particularly good argument because she's already used to cold temperatures from the desert nights. Plus she doesn't seem the type of woman to be worrying about her dress all the time - she just uses whatever clothes she has and gets on with it.

Here is what TVTropes has to offer:

Limited Wardrobe: The character always wears the same outfit, regardless of the setting or season.

This trope is especially prevalent in shows with heavy merchandising tie-ins, where it is considered important to maximize the resemblance between the characters and their action figure counterparts.

And I guess the Star Wars saga fits the category well.

3
Wasn't Rey cold on Starkiller base? Shouldn't this have impacted her somehow?
-8
Where did Rey get her new clothes?

10
How long was Daisy Ridley/Rey's hair?
8
How does Rey know about the force, Luke, the Jedi and the "stories" of the previous movies?
5
Was Rey's memory wiped?
13
Why does Padmé have so many outfits?
7
Why didn't Rey encounter Dark Side Rey inside the cave on the planet Ahch-To?