Gruesome scifi horror B-Movie 1990s-2000s, similar premise to The Cube, except in a car park?

Here's what I remember:- 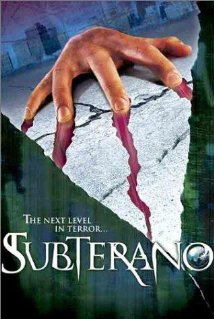 Eleven souls, trapped in an underground carpark, are attacked by deadly, remote controlled toys. Only a few will survive.

It was filmed and released in Australia. According to Australian Horror films 1973-2010, it was released by Showtime Australia. They also have a plot summary for the entire movie:

Some time in a future world, Conrad is an assassin for the group "Orphans for the Revolution." He escapes from the vehicle that was transporting him to his execution. He finds his former girlfriend, Grace Stone, who frives him to the Embo Industries car park (parking garage), "Safe Park." The car park is closed for the night, and Conrad, Grace, and a group of feral children are locked inside with Sheriff. They are challenged to play a game with Emboman. People are killed one by one by Emboman's toys. His virtual reality figure is defeated by Conrad, who discovers he has a son by Grace, named Jake. Conrad, Jake, and Grace exit the car park through the sewers and head to the mountains. Emboman is revealed to be Todd, the son of Cunningham, the president of Embo Industries.

There are more details further down in the book entry discussing the death via orb, the feet being cut off, and the electric torture.