Are there any supporting Westeros tales apart from the three Dunk and Egg shorts?

Having finished the current ASOIAF books, I discovered the three Dunk and Egg shorts and really enjoyed reading about Westeros from a historical perspective, removed (in part) from the ASOIAF narrative.

Has George R. R. Martin written any other supporting tales based around this world?

There is also now a novella called The Princess and the Queen which is available in the Dangerous Women anthology.

I bought the hardback anthology without realising how physically unwieldy it is, so I would recommend an e-book version if there is one!

The other short stores in the anthology are interesting, there are a huge range from WWII pilots and wild west desperados to galactic federation alien invasions.

To my knowledge, there is only the three Dunk & Egg novellas. You can read more at westeros.org's detailed ASOIAF Bibliography.

You should know, however, that ASOIAF and D&E are not all that far removed. For example (beware of spoilers):

GRRM has confirmed that one of Dunk's descendants appear in ASOIAF.

The eventual death of Dunk & Egg occur at Summerhall, on the day that prince Rhaegar is born. It is speculated that Egg dies trying to fulfil the prophecy of The Prince that was Promised.

The Prince of Dragonflies, Egg's son, was romantically involved with Jenny of Oldstones, who was somehow related to a woods witch (the ghost of high heart), reputedly being the same dwarf woman Arya met while she was with Lord Beric's rebels. In ASOIAF she is mentioned as being the one who prophecised that The Prince that was Promised would come from the line of Aerys II and Rhaella.

One character appears in both series.

Maester Aemon is Egg's brother. (No, he's not the one)

I hope I did not spoil anything for you, but instead whet your appetite for working out all the tons of little connections between the books. For me, this was the biggest thrill of reading Dunk & Egg.

As of this post, there two canon ASOIAF additions:

Currently 3 in this series: The Hedge Knight, The Sworn Sword, & The Mystery Knight. They follow the adventures Ser Duncan The Tall and Aegon Targaryen V. The time period is just under a 100 years prior to the events of Game of Thrones, 10 years or so after the Blackfyre Rebellion.

A stand-alone short story written in a more omniscient style: historically documented instead of POV. It chronicles the civil war known as the Dance of the Dragons. The time period is 200 years prior to the events of Game of Thrones.

This was delayed in favor of publishing The Princess & The Queen, and is expected to be released as part of a collection of the first 3 Dunk & Egg tales.

A coffee-table illustrated book, not a story. It will touch on many events throughout the ASOIAF history, with lots of new trivia expected to be revealed. Its release has been delayed many times, but is currently set for release in October 2014.

The only works not in the Ice and Fire series that are still set in Westeros are the three Dunk and Egg short stories. The next closest would be the TV series, where he penned one of the episodes, but I don't think that is what you were looking for.

There are three other "short stories", but these are actually adaptations of chapters from the books:

There is also another short story entitled "The Rogue Prince, or, a King’s Brother" in the anthology book ROGUES (edited by George R. R. Martin and Gardner Dozois).

It was released in June 2014 and focuses on king’s brother, Prince Daemon Targaryen in a story set several hundred years before the events of ASOIAF. 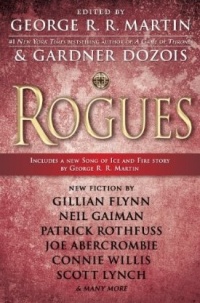