Why Would the Wall on Abydos Have Coordinates Instead of Stargate IDs?

In Children of the Gods, when the new Stargate team returns to Abydos, Daniel shows them a wall in a building with a large number of gate addresses on it. They later use this as information to help them find other gates - after Samantha Carter figures out how to compensate for galactic drift, that is.

This list is written in stone, indicating it's expected to last a long time. All the addresses in the list are six symbol addresses, but in this part of the Stargate Wiki, the differences between 7, 8, and 9 symbol dialouts and addresses is explained:

If it's possible to always identify a specific gate, which never changes and won't require recalculation for galactic drift, then why wasn't the list of addresses given as stargate ID codes instead of as coordinates that will change with drift?

I don't believe this was ever addressed in the series, but I see a few plausible reasons.

First, the goa'uld who built the wall didn't know, or didn't care, that they needed to compensate for galactic drift. In fact (as Philip pointed out) if you're using a standard DHD, they already compensate automatically. If they built it during the early years of their reign they were still mostly parasites on rather than owners of the stargate network, with little clue how it worked. We encode latitude and longitude on millions of permanent objects, yet continental drift will invalidate all those records in a few hundred thousand years. (And as our measurements require and acquire more precision, they'll get out of date even faster.)

They definitely did not know about 9 symbol addresses.

As far as I know, dialing a 9 symbol stargate address is not supported by a standard DHD. The only time we've seen it done it also took vast amounts of power, beyond what any human or goa'uld has had available before. What I'm not sure of is whether this energy is proportional to distance (in which case using a nine symbol address for a nearby gate might be feasible), or a fixed cost.

I think one reason is to establish a dominant Stargate if two are in a region. If you're using unique identifiers for Stargates, it's more likely you might get into a situation where two in close proximity are activated at once, and I imagine that having multiple wormholes activated so close together is very bad. By making the coordinates be location based, an incoming wormhole will always try to establish with a dominant gate and disengage if it's busy, rather than trying to establish a wormhole with another gate in the region and have havoc ensue.

One consequence of this (established before the earlier reason by the writers needing a good script) is that Goa'uld tactics sometimes require moving Stargates and therefore they would require location-based coordinates. Consider the following:

In Season 2's The Serpent's Lair, Apophis arrives with a Stargate with his Ha'tak and dials out to a planet when he arrives, thus preventing Earth from using a Stargate to flee. Presumably this is done in most combats. Since there is a "dominant" Stargate in a location, it makes more sense to just refer to the location you are in, since that's the time when it's going to be advantageous in battle and it wouldn't matter which Stargate you bring with you (or heck, you could have multiple Stargates in a fleet of ships).

It also makes for a more effective base planet: put your ship with a Stargate at your main base planet, everybody rendezvous by gating to your home planet, you go off to fight your enemy, and if things go bad, you all gate home. This ensures that everybody is going to the same place and they only have to know one address, not two.

Also Ra in the alternate Moebius timeline takes the Stargate with him when the humans rebel. Either he put it on his ship or he dropped it on another planet. Having Stargate-based coordinates would mean that a cartouche describing Earth will still point it it, even if some Goa'uld years later drops a different Stargate there (which apparently happened with Yu and Sokar picking up followers at various points in history).

This also means that you don't find an outdated cartouche and then wind up on a frozen planet on the other side of the galaxy because it was describing Earth. After all, you're more interested in your destination, not which ring you come out of.

Also, it'd mean that whenever the SGC swapped between the Antarctic gate and the Giza gate, they'd have to learn a new set of coordinates (or in the episodes where they suddenly switched, like 48 Hours, teams wouldn't be able to dial back to Earth because they wouldn't know that a switch occurred).

There are benefits in that you don't need to worry about stellar drift, but ultimately, that's a very long term benefit. The short term benefits of a location-based system seem to outweigh it.

From an out of universe perspective, the first time they established that gate addresses were location based and not gate based was the Season 1 episode Solitudes, which relied on the fact that there were two gates on the same planet accessed by the same address. If they had unique addresses, that episode couldn't have (easily) been written.

Actually, the "Abydos Cartouches" are not cartouches at all, but regular, non-grouped Egyptian hieroglyphs (and in an easily discernible repetitive pattern): 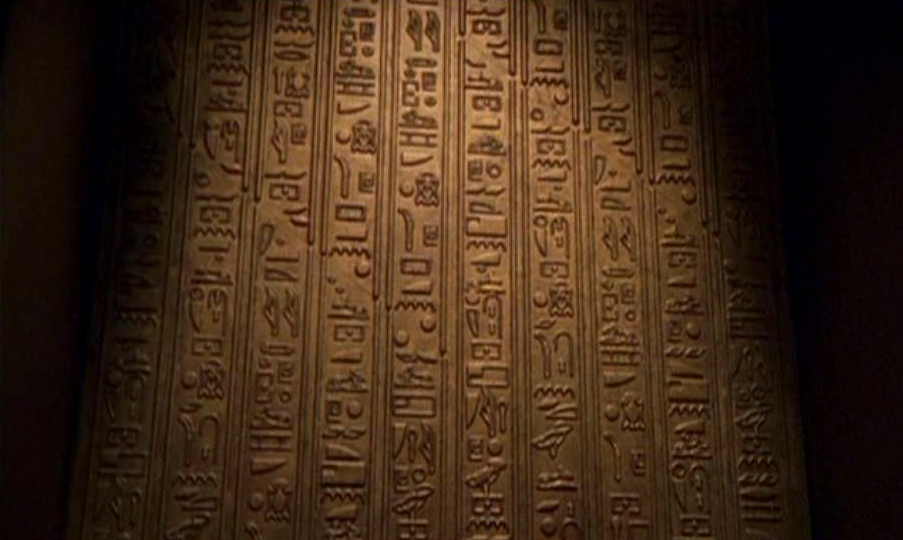 This in itself does not necessarily clash with the lore: all constellations stars in Ancient Egyptian had names written in hieroglyphs and Daniel would know this. Here for example are some star names that were actually used to keep time at night (noting the time of rise of the stars on the horizon): 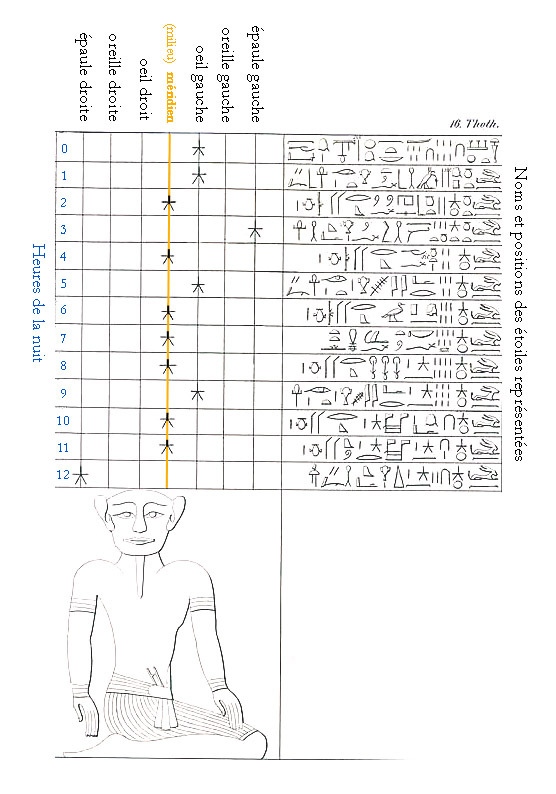 But they are definitely not grouped in cartouches.

13
What Does the "Point of Origin" Symbol Actually Do?
14
What Was the Purpose of Different Point of Origin Symbols?
16
Why didn't Stargate Command continue to fast dial the gate?
9
If Langford's team could reach Heliopolis by stargate in 1945, why was Abydos the only planet SGC could dial before discovering the Abydos Cartouche?
31
Wouldn't the stargate addresses from Earth be different?
3
How can you dial Abydos address from Icarus base?
3
In the Stargate series is there any indication whether the 7th symbol of an 8 symbol address is always the same?
3
How do the SGC address codes work?