Was it a mistake that the X-Wings in The Force Awakens were waiting in hyperspace?

I have seen The Force Awakens twice and don't have access to the scripts, but...

Re-watching last night, it occured to me that while Han, Chewie and co were working to bring down the shields on Starkiller Base, the group of X-Wings seems to have been waiting in hyperspace. Is this possible?

To be clear, I'm 99.9% certain they didn't just jump into hyperspace and then right back out again as if it was a very short trip from a nearby system. They definitely appeared to be waiting in it as if they had been there for at least a few minutes, then dropped immediately out into the right place.

In short, yes. They DID (1) wait in lightspeed as you noted, and (2) communicated in lightspeed, as confirmed by WGA script. And that hasn't ever been seen before in Star Wars; and #2 hasn't yet been explained or retconned as far as I could find.

First, to confirm your observations from WGA script:

Foster novelization (as usual) is slightly different and way more coherent, but doesn't address some of the problems:

In another command and control center, on another planet in another system, there was a spontaneous outburst of excitement, followed by a hurried response. “General,” the head tech cried out, “their shields are down!”
“Oh my.” Threepio leaned toward the relevant console. “So they are!”
“You were right,” Leia said to Statura. “Send them in!”
“Give Poe full authorization to attack,” Ackbar informed a junior officer stationed at another console. “All available ships, no hesitation. He knows he’s not likely to get a second opportunity.”
“Black Leader,” the officer declared to the pickup that would send out the command via the identical set of relays, “go to sublight. Attack, attack. On your call.”

It was the order Poe had been waiting for. While unsure it would come, he had nevertheless run over the strike schematics in his head a dozen times. Timing was critical. Having plotted the vector to the planet that was home to the Order’s Starkiller Base as an arc, both to deceive any long-range sensors as well as to delay arrival and emergence from lightspeed, now they could revise the route and head straight for the target.

“Roger, base.” Hitting the controls necessary to alter course within a lightspeed run, Poe addressed the rest of his flight. “Red squad, blue squad—follow my lead.” At his touch, their revised vector entered the flight computer of every ship in every squadron, and the X-wings promptly adjusted as a single unit.

Note that the X-Wing emergence in novelization clearly wasn't instantaneous - after the shield was brought down, Kylo Ren and his team had a chance to examine the Falcon, and he leisurly sat down in Falcon's cockpit after that. Only then...

His deliberation was interrupted by a thunderous roar as squadrons of X-wings dropped from the sky, rocketing toward the hexagon-shaped bulk of the containment field and oscillation control system. Rising from the seat, he rushed out in time to see the Resistance fighters drop toward the massive structure—and begin their bombing runs.

So, if you take the novelization as a retcon: 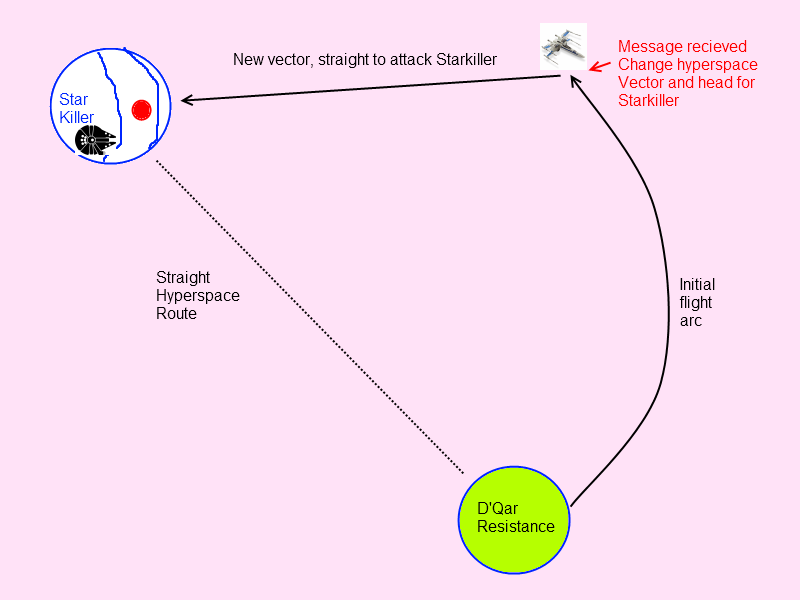 The X-Wing squadrons initially traveled to Star Killer Base in hyperspace and upon arrival drop to orbital light speed around the Killer Planet's Star. They had to wait for confirmation that the shields were down, until that point they had to maintain a system orbit at light speed. When the Hyper Comms relayed that shields were down, command was giving to the squadrons to begin their assault and they dropped out of light speed. Hyperspace is for galactic travel, light speed is travel in or around star systems.

Not the answer you're looking for? Browse other questions tagged star-wars the-force-awakens hyperspace or ask your own question.

30
Why is Galadriel always barefoot?
10
Can you stop and hang out in hyperspace?