Why is Galadriel always barefoot?

In both The Hobbit and Lord of the Rings movie trilogies Galadriel is always shown walking barefoot. Does it say in the books that she walks around barefoot or did Peter Jackson just want to show off Cate Blanchett's feet?

A couple of examples:

In the books, Galadriel's feet are never mentioned, so the question is moot.

She doesn't appear in The Hobbit (book) at all, and in Lord of the Rings she appears only in The Fellowship of the Ring and briefly in The Return of the King. About all we know about her footwear is that if she does wear shoes, they must be white.

So it could well be, as you say, just Peter Jackson wanting to show off Cate Blanchett's feet. However, as others have said, going barefoot fits with her nature-goddess image and with what we can surmise from the footwear of Legolas about the toughness of elves' feet.

Because she doesn't need to.

Elves don't feel the cold as we do. For example, Legolas climbs a mountain in light shoes.

With that he sprang forth nimbly, and then Frodo noticed as if for the first time, though he had long known it, that the Elf had no boots, but wore only light shoes, as he always did, and his feet made little imprint in the snow. ‘Farewell!’ he said to Gandalf. ‘I go to find the Sun!’ Then swift as a runner over firm sand he shot away, and quickly overtaking the toiling men, with a wave of his hand he passed them, and sped into the distance, and vanished round the rocky turn.

The Lord of the Rings | The Ring Goes South

I would suspect this is an extension of that.

I can't give you a direct quote since I returned the book to the library, but I just finished reading "The Hobbit Party" and the authors claim that Galadriel has some of the same characteristics found in popular renaissance and modern depictions of The Virgin Mary. As well as more modern accounts of seers (like at Lourdes where Mary appeared barefoot) 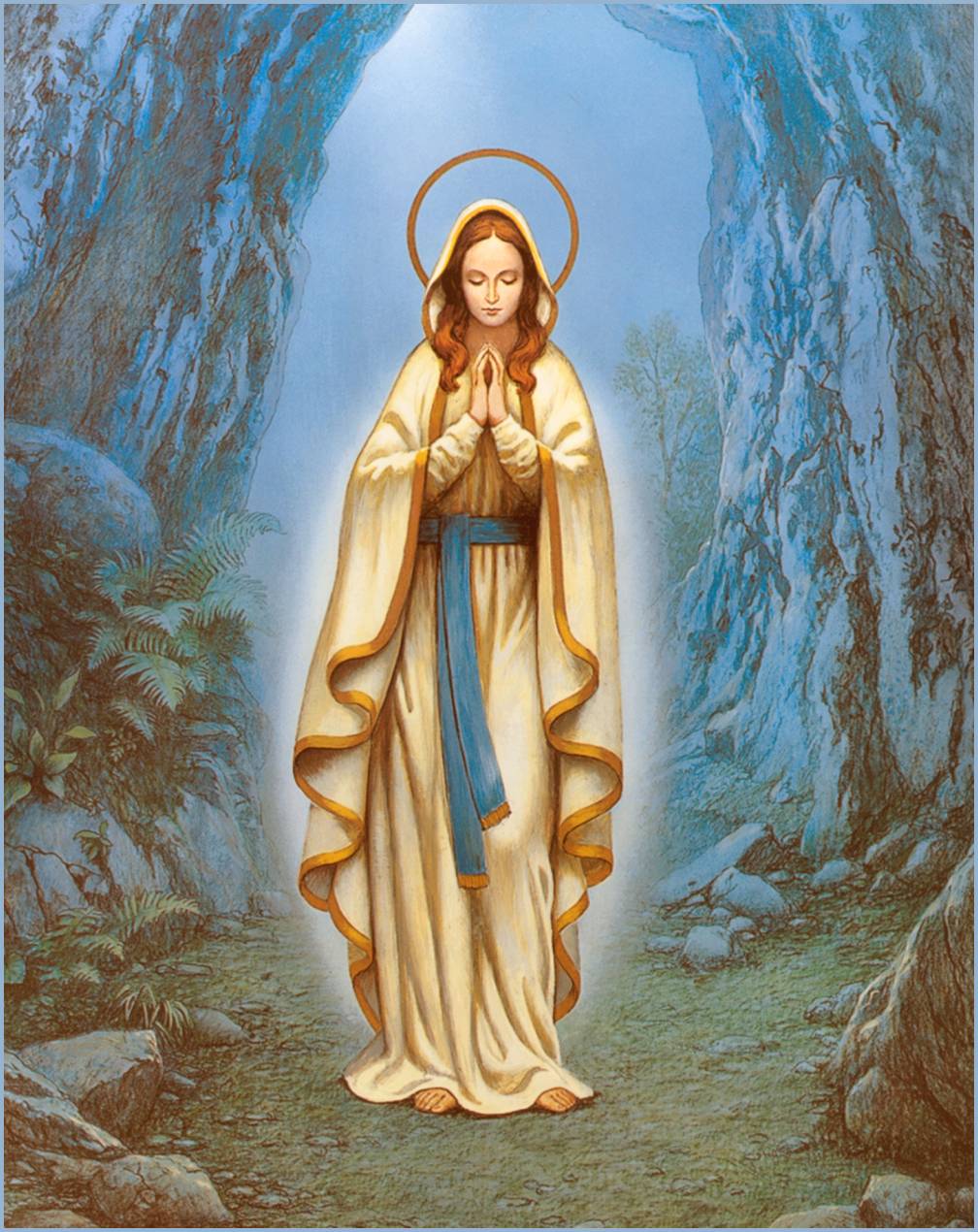 Even given the fact that the Lord of the Rings is not an allegory, it's not out of the way for characters to appear in books as "Types" of other characters from history or literature. Eru being a "Type" of the Creator God and the Istari being types of angels and Melkor being a type of fallen angel.

The key to understanding Galadriel and her affect on Gimli is in the Lady of the Galadhrim’s Marian roots. Tolkien clearly meant her as a figure of the Virgin Mary. Galadriel is beautiful and majestic. She reflects the light of the stars. She is perceptive and gracious. She gives gifts and help and comfort. Many of these qualities don’t quite reflect Mary as the poor and lowly handmaid of the Lord. So, without a Catholic perspective, the allusions could be easy to miss. But Tolkien possessed not just a devotion to his Catholic faith but a devotion to Our Lady as well. So he surely viewed Mary as she truly is, Queen of Heaven and source of perpetual help.

So, given this, it's no altogether unlikely that Jackson, Dickson, Taylor, et al. from WETA would attempt to make the queen appearing in the book with the most abundant intercessory power as much as possible (in little details) like the one in the imagination of millions of people.

Still, the blog post I linked to said that Tolkien had a semi-confused character developed out of Galadriel who was possibly unfinished at his death.

Interestingly, the character of Galadriel changed over the course of the years as Tolkien developed his world’s history. At first, he wrote that she, along with many of the other elves of her kind, was culpable in the rebellion in Valinor (If you don’t know what I’m talking about, don’t worry. Just nerd stuff). But, later, he changed his mind on this and wrote that she was innocent of any wrongdoing. Actually, the word he used was “unstained,” clearly an allusion to Mary’s Immaculate Conception. Apparently, Tolkien’s vision of Galadriel became clearer even to himself. In a letter to a priest friend, Robert Murray, Tolkien wrote:

“I think I know exactly what you mean by the order of Grace; and of course by your references to Our Lady, upon which all my own small perception of beauty both in majesty and simplicity is founded. The Lord of the Rings is of course a fundamentally religious and Catholic work; unconsciously so at first, but consciously in the revision. ” Letter to Robert Murray, S.J., 2 December 1953

That quote is often used to justify quite a bit of Catholic speculation about the characters in LOTR, but like most people are apt to point out, there aren't a lot of ladies in the books and if one embodies "majesty and simplicity", it's probably Galadriel. Philip Koloski a Voyage Comics and Publishing writes that Mary is reflected in Arwen, Eowyn, Luthien and Galadriel:

Galadriel is an excellent reflection of many characteristics of the Blessed Virgin Mary. She is said to be the fairest of all the elves and was granted the ability to see into the mind’s of others, seeing their thoughts. She was called the “Lady of Light” or the “White Lady.” Her hair was so beautiful that even Gimli desired to have a single strand of her hair. She also dispensed many gifts to the Fellowship when they stopped in Lothlorien. Galadriel reflects that heavenly beauty of Our Lady and reminds us of the role of the Blessed Virgin Mary as the “Mediatrix of All Graces;” the one who intercedes most powerfully for us and dispenses many gifts to the faithful who call upon her.

Some of the titles given to Mary (which there are hundreds in Catholicism) are very similar to the titles given to prominent women in LOTR. (i.e. Evenstar is to Arwen as Evening Star is to Mary). So I'm not saying it's a one-to-one match, but every women of valor, majesty, wisdom and grace in his books is a very clear reflection of the Blessed Virgin Mary. I'd add Rosie Cotton, in her humility, too that Philip's list too!

Galadriel is not always barefoot in the LOTR movies.

She is not barefoot in the "Galadriel and Celeborn" scene, where the two descend the stairs to welcome the Fellowship. She appears to be wearing a kind of silver-white ballerinas or similar (there is only a glimpse of her shoe though). As befits her role at that moment.

As for Galadriel trotting barefoot to the Mirror by night, although I cannot claim anything, I always took that scene to be hinting stealth. This is not a queen walking regally through the halls of her abode in full view; this is a woman seeking private, important conversation with a guest, walking barefoot in her own house by night.

[And as for Hobbit, her very appearance there is just totally off the hook.]

Galadriel barefoot in Lothlorien means she's in direct physical contact with the land itself. It's a neat way of showing how interconnected the two are and how dependent the maintainance of Lothlorien is on the power of Galadriel and her ring.

Not the answer you're looking for? Browse other questions tagged the-lord-of-the-rings tolkiens-legendarium galadriel or ask your own question.

12
Was it a mistake that the X-Wings in The Force Awakens were waiting in hyperspace?

31
How can Galadriel go into the West?
39
Why is Galadriel so awesome?
15
How did Saruman's army reach Helm's Deep so quickly?
7
Would Galadriel have been able to defeat the Witch King?
9
What was the benefit of the belts given by Galadriel to 3 Fellowship members?
4
When did Galadriel become Queen of Lothlorien?
13
What makes Galadriel so powerful?
21
Does Galadriel wear any specific jewelry?
40
Why didn't Galadriel take off her ring?