Why did the First Order's army of stormtroopers need a pep talk?

In the scene directly leading up to the

firing of the Starkiller weapon for the first time

General Hux gave a rousing speech to his stormtrooper army

Why does he need to do this? Its an army of stormtroopers. They will do what he says, and don't need a pep rally to get into the mood.

This is addressed in the film's official novelisation. It was supposed to be a memorable occasion that the operation's hierarchy (as well as the Stormtroopers) can talk about at the watercooler later.

Also, Hux seems to rather enjoy the whole thing and, let's face it, he's the boss and can schedule whatever he damn well pleases:

The mass rally was impressive. Those who were present would never forget it. Which is the point of such things.

A thousand or so stormtroopers and their officers fronted assembled TIE fighters and lesser machines of war. Around them rose the central edifices of Starkiller Base. Towering still higher above the buildings were the snowy crags of the surrounding mountain range that simultaneously shut off and shielded the central portion of the base from the world around it.

Glorying in the moment, General Hux stood at the head of the assembly flanked by his senior officers, all aligned atop a raised platform backed by an enormous crimson-and-black banner stamped with the insignia of the First Order. Enhanced by artfully concealed amplification, his voice boomed across the troops assembled on the parade ground.

Out of Universe: because they were explicitly making the First Order parallel the Third Reich. Down to the name it seems, now that I typed them side by side.

The "propaganda" aspects of First Order appears to have been severely influenced by infamous "Triumph of the Will" by Leni Riefenstahl; let's compare the rally speech; or rally screenshots: 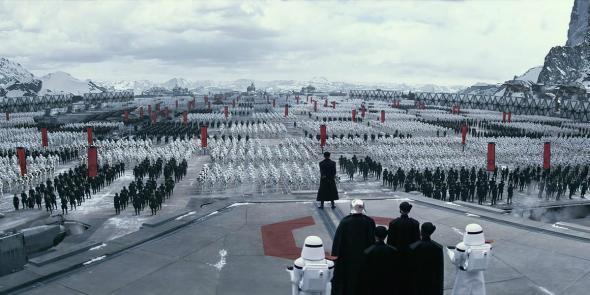 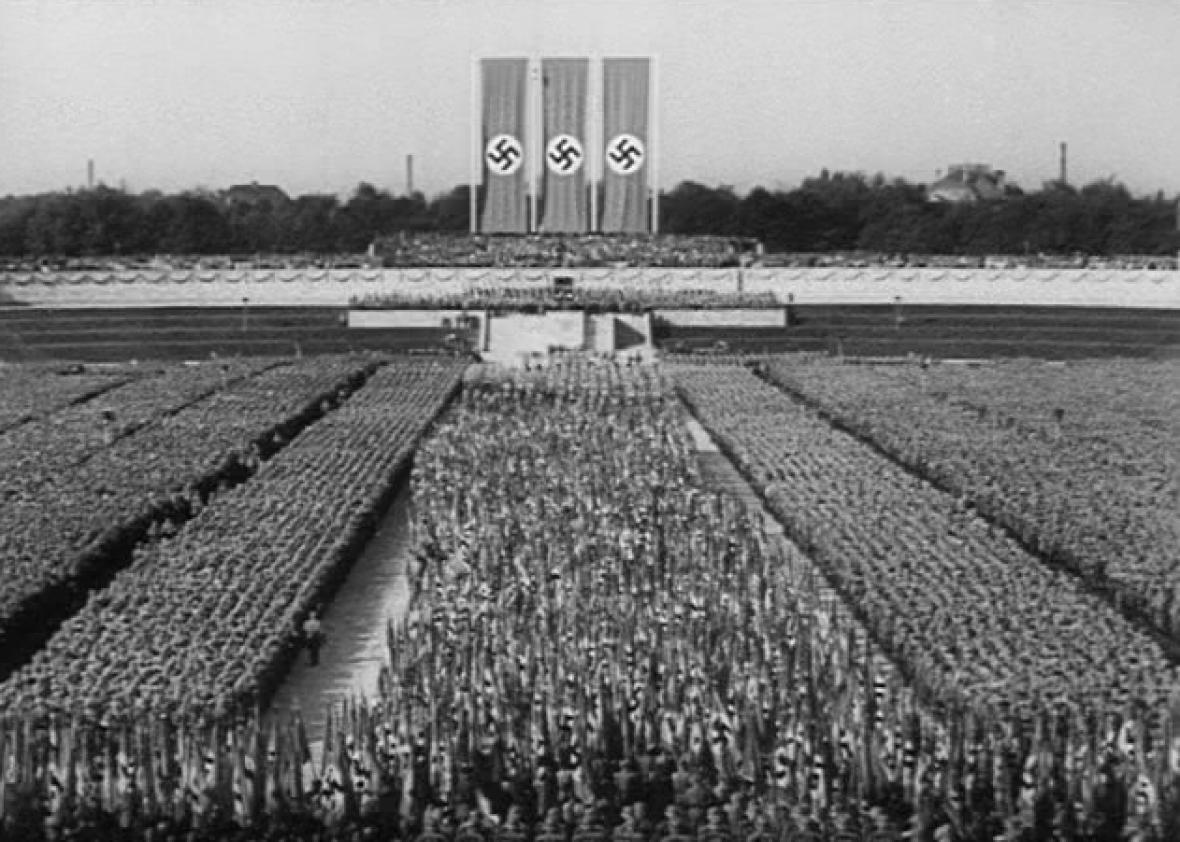 For extra dose of weird, Slate dug out eery similarities between A New Hope medal award Rebel ceremony and Triumph of the Will again: nazi video imagery totally paralleling Rebel.

In the prequels and possibly part of the original trilogy, the stormtroopers were clones with loyalty and training implanted at creation. They were then substituted by volunteers and finally, with the advent of the First Order, by children kidnapped and forced to enrol.

So, unlike the clone troopers, the FO's troops are still susceptible to emotions and fear, hence needing encouragement (read: brainwashing) like real-life troops.

I also remember reading in the response to another question that some clones rebelled to the implanted orders so maybe a pep talk would have benefited even them.

Stormtroopers can't be guaranteed to just follow orders blindly unless they are clones. That's why they have reconditioning available...

There is a second case of stormtrooper blatant disobedience shown in the movie itself.

Kylo Ren repeatedly cries out "Guards! GUARDS!" - but no guards come. We see two guards turn around and walk away rather than obey his order to attend him.

Now, neither one seems particularly afraid that the other will turn them in as a traitor, which suggests that this behavior is not just common enough to have at least one reconditioning centre, but is in fact endemic.

The guards communicated their desire to walk away with no more than a glance, so clearly the two guards are very close - far closer than interchangeable clones ever were permitted, by design. This closeness was also shared between Finn and the dead "Slip" (FN-2003) who left his handprint on Finn's helmet, and likely also to "Nines" (FN-2199, aka TR-8R), explaining Nines' furious cry of "traitor" and undisciplined impromptu duel with the riot baton.

At least they got a good speech as a send-off.

5
Is The First Order in any way related to Order 66?

31
Why did the Jedi fail to get information about Order 66?
16
Where did Finn get the blueprints for Starkiller Base?
41
Is there any in-universe reason for a stormtrooper to use a melee weapon against Finn?
6
Where did Maz Kanata's patrons go during the First Order's attack?
1
Why are the First Order's weapons designed this way?
6
How many stormtroopers are in the First Order military?
4
Why do the First Order stormtroopers have better aim than Empire Stormtroopers?
34
Does this cut material from Rogue One still appear in the novelisation?
2
Why and how did the Banking Clan and Techno Union pretend to be neutral?