Was the Doctor’s TARDIS inside Clara’s?

So, in the final episode of series 9, the Doctor is without his TARDIS, it having been left in London during a previous episode.

Not mentioning the beautiful art that Rigsy did to his TARDIS, (which we'll save for another question about whether the Doctor realized who it portrayed (Clara)) —

How did Clara and Me transport the Doctor’s TARDIS using their own? Shouldn't this have been a disaster? If we look at the mini-episode Time Crash when the 5th and the 10th Doctors’ TARDISes crash into each other, it doesn't bode well.

How then was Clara able to transport the Doctor’s TARDIS to the desert?

Yes, The Doctor's TARDIS was inside the Clara's TARDIS and it's not the first time it happened. Time Crash shows a different thing (i.e. Crash of the same TARDIS from different time). It's not landing one TARDIS into another. Here are some previous incidents in which one TARDIS landed into another:

If that wasn't enough, The Doctor's TARDIS has landed inside itself creating huge paradox of both Time and Space (Watch mini-episodes Space and Time).

As you say, Time Crash had the 5th and 10th Doctors’ TARDISes crash into each other.

That’s presumably different from, and much worse than, one TARDIS materialising around another TARDIS, which I’d guess is how Clara and Me managed to transport the Doctor’s TARDIS from London to the desert.

I think this is plausible — in our universe, there’s a difference between, for example, a car going inside a truck: 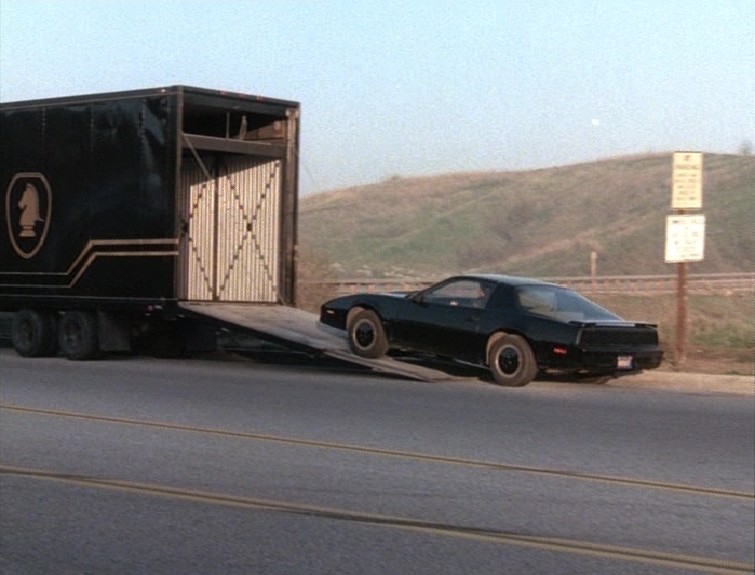 And a car crashing into a truck: 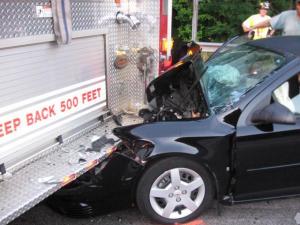 I think it’s also significant that the 5th Doctor’s TARDIS and the 10th Doctor’s TARDIS are the same TARDIS at different points in its time stream. My puny human brain can’t begin to work out what sort of paradoxes that might introduce.

The diner TARDIS is unique in that the door to the control room doesn't open to the immediate outside but rather into the diner-counter room. There are 2 possibilities.

The diner room is not actually "inside" the TARDIS but part of the illusion of the outer shell. If this is correct then there is no need to presume the Doctor's TARDIS was inside Clara's TARDIS. Clara could easily have arranged for it to have been shipped from the UK to the US.

The diner room is actually "inside" the TADIS in which case it would appear that Doctor's TARDIS was inside Clara's TARDIS. There have been a few instances of "one TARDIS inside another/same TARDIS" but they have always been considered at least risky behavior if not a serious emergency. It is possible that it's only a problem when it is unplanned (as seems to cover all the previous cases) but it's safe when it's planned especially if done with the explicit co-operation of the Doctor's TARDIS.

In either case it's clear that the TARDIS appeared to be only a few feet away from where he was standing in the diner. So either it was hidden from his view or it arrived there, very quietly, just after the diner-TARDIS left. Note that the Doctor spends a few seconds looking around NOT in the direction of the TARDIS until he finally turns all the way around and sees it.

1
What was the point in the Silence trying to kill the Doctor when Clara saves him anyway?
12
Effect of the Tenth Doctor’s regeneration on the TARDIS
3
Time-Stream Crossing and Forgetfulness
10
When was the phrase "Timey Wimey" first invented by the Doctor?
11
Why didn't the Doctor use the TARDIS to return to Madame De Pompadour
8
How did the Doctors enter the "Gallifrey Falls" painting?
12
How does the TARDIS know where to place objects it lands on inside?
2
What dimension is the inside of the Tardis in?