How did Willie and Short Round not see Mola Ram standing at the other side of the bridge until the last minute?

In Indiana Jones and the Temple of Doom, Short Round and Willie try to escape across the wooden bridge, unaware that Mola Ram and his henchmen are standing right in front of them. How could they not have seen him while walking across it?

The very short answer is that they were watching their feet (on the rickety rope bridge) rather than looking ahead. 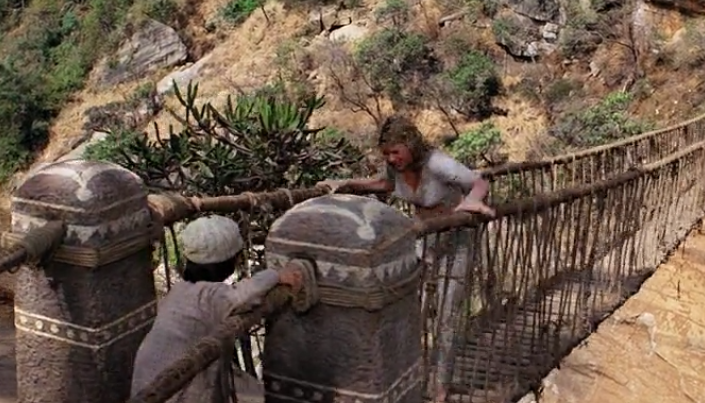 You may also want to note that even a few seconds before they reached the end of the bridge, Mola Ram and his henchmen were nowhere to be seen: 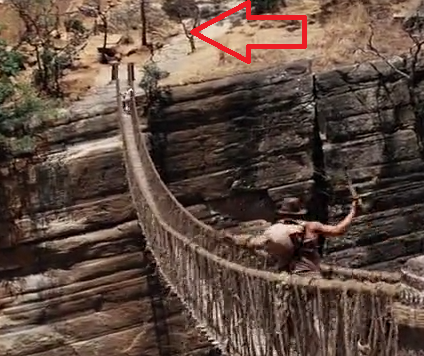 The film's official movie tie-in novel doesn't specifically mention how Willie and Short Round walked into the trap but it does point out that Indy was too engrossed with looking down (making sure that he's hitting the planks and avoiding the missing ones) to notice the guards coming out of the woodland at the end of the bridge until it was too late:

He walked quickly, hanging on to the twine rails. Every few steps his boot would break through; he’d have to catch himself on these upper ropes. Consequently, he kept his eyes turned downward most of the way, looking to step over the weak boards. When he was nearing the middle, he heard shouting ahead. He looked up to see temple guards appear at the far end of the bridge.

Willie and Short Round were caught as soon as they stepped onto hard ground. They struggled with their captors, but it was futile. There were too many.

17
What caused the village drought in Indiana Jones and the Temple of Doom?