How did Kylo Ren get to the forest so quickly?

In The Force Awakens there is a scene inside Starkiller Base.

How did he get there so quickly? 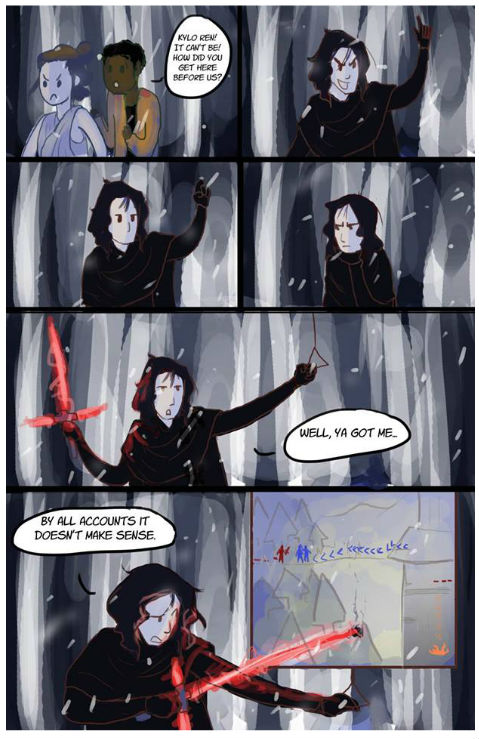 He was very determined. On the other hand, they were wandering and were forced to stop and take a break for a few minutes.

According to Chapter XVII of the official Alan Dean Foster novelization,

...Kylo Ren struggled to stand [on the catwalk]. As he did so, his gaze turned upward. To meet the stares of a Finn and Rey peering down at him. The shock of recognition helped him to regain his footing. Rising to his full height, he started back along the still-standing walkway, moving with determinantion. Heading upward.

Then in Chapter XVIII,

Seeking a path through the snow, shadows, and increasingly dark forest, Finn finally slowed. Where were they running to? In any event, he and Rey were out of breath...It was good, anyway, to stop.

So it seems that they were somewhat lost, had no idea were they were going, and were tired enough to be forced to take a break.

Kylo, on the other hand, was resolved to find them and was not stopping for even a moment despite his injury. Given that Rey is strong in the Force but not yet skilled enough to shield her emotions, he may have also used the Force to sense Rey's fear and track her (as @thegreatjedi suggests below).

Finn and Rey had to climb back down the ladder the climbed to get up onto their level. Climbing down a ladder can be pretty slow work.

I believe Kylo was already at ground level or one level below, and he would only have stairs to climb up not ladders to go down and could run the whole way.

Kylo Ren is a Force user who trained (albeit however briefly) with Luke Skywalker. It is possible that he was able to use the Force to move quickly to intercept Finn and Rey before they were able to escape. This is purely speculation on my part, though, as the movie does not have a clear answer as the original poster mentioned.

29
How can Kylo Ren recognize this item?
23
How old are Kylo Ren and Rey?
11
What happened to Kylo Ren?
5
Why did Rey and Finn change jackets on Starkiller Base?
1
When did Kylo Ren turn to the dark side?
6
Did Kylo Ren Split the Beam from Starkiller base?
20
How Does Kylo Ren not stop Chewbacca's blaster?
2
Could Luke's lightsaber call to Finn instead of Rey?
14
How did Rey get her blaster back?