In the Next Generation/DS9/Voyager timeline (ignoring the reboot films) what was the comparative size of the various factions, i.e Federation had x worlds and covered x size of space. Any recurring faction should be included in the list, we can ignore one off species and omnipotent god like species like Q.

I've made a bit of a list based on Memory Alpha pages of what we know:

Bear in mind that this list is based only on what we know in canon. It is quite likely that many of these empires are far larger than this.

If these maps (below) is any guide, we actually know very little of the actual size of the various factions: 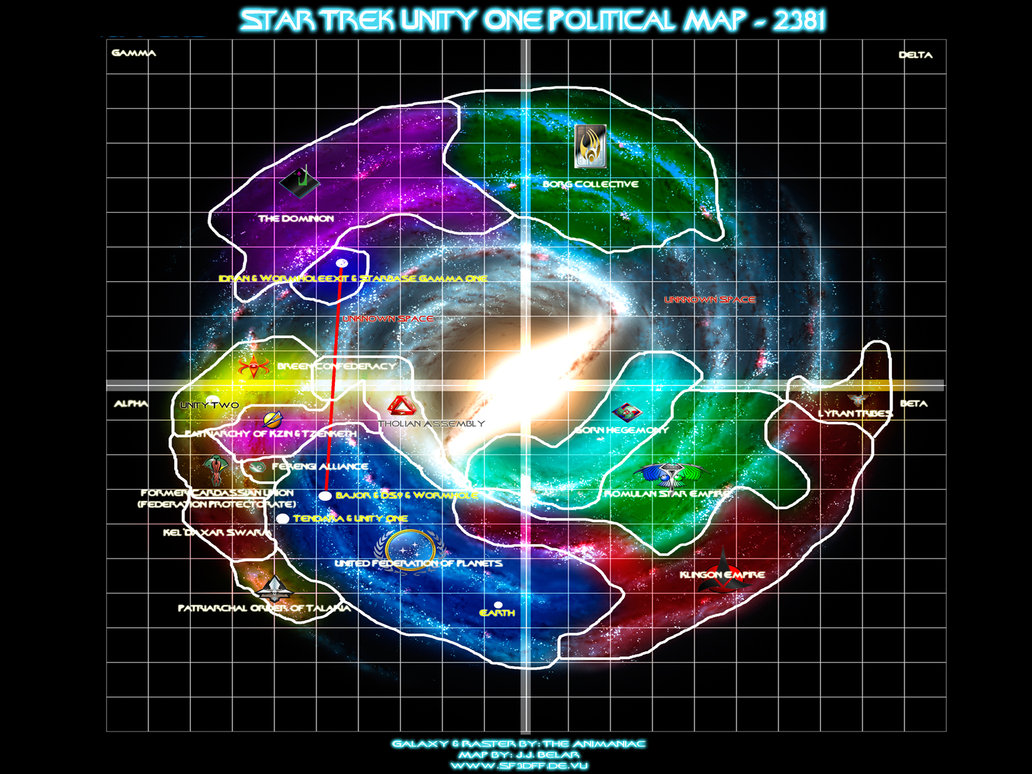 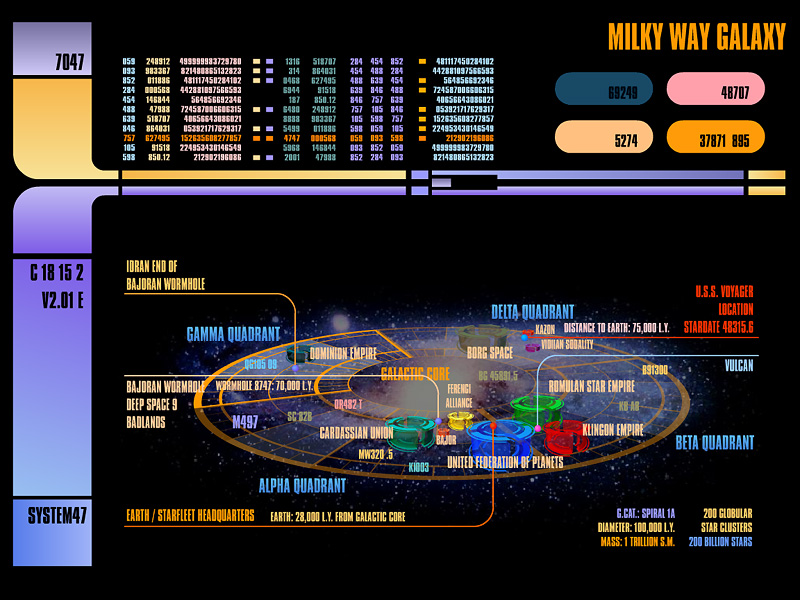 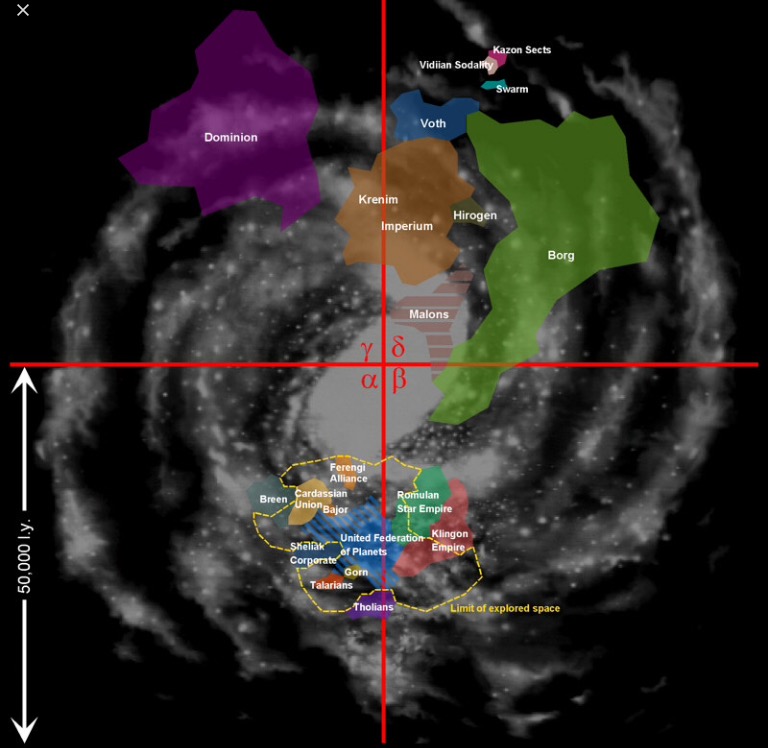 I found the map above online, and I believe it is the closest representation to their relative sizes.

]In terms of size, I believe the alpha and Beta Quadrant powers are generally equal in size (namely the Romulan Star Empire, The Federation, the Klingon Empire, & the Cardassian Union). This is how I would compare them :

(1) Federation: when they have their act together, they are the most powerful nation in the quadrant. By sheer numbers, the Federation has a large advantage due to the number of member worlds. Somewhere in the neighborhood of 150 worlds are members of the federation (not including uninhabited worlds). When we consider that the Federation is the only true Alliance of races in the quadrant, we can also assume, that because of the vast number of members, that the territory expands with it. I am inclined to believe that by size the federation has a distinct advantage. From what we have witnessed during the 5 series' though, is that the Federation hasn't executed this to their advantage. We have heard many references to wars with other governments, namely the Tzenkethi (DS9 The Adversary) and he Cardassians (TNG "The Wounded"), and it appears they have ended in stalemates. Since the Federation is an empire of membership rather than conquest, we can infer that not all worlds within federation borders are under Federation control. Overall, the Federation appears to be the largest in terms of territory.

(2) Klingon Empire: The Klingons are well known for their conquest, even as late as the 2370s (DS9 "Hypocratic Oath"). We know the Empire is on par with the Federation. However, it appears that Klingons are the only substantial race within their own borders, and thus have a much smaller population. In comparison with the Federstion in sheer influence, resources, and technology, the Klingons are an even match, and due to this we can assume their territory is too. Conquest can be just as effective as diplomacy in extending the borders, though I believe they are slightly smaller

(3) Cardassian Union: Probably the next step down from the top two. They are remarked as being "resource poor" (Star Trek Encyclopedia), which may be derived from a lack of useable land (or in this case planets). The Union loss several outposts during the Klingon invasion of 2372 (DS9 "The Way of the Warrior") and were also forced to concede several worlds to the Breen during the Dominion War. Also noteworthy is the seemingly tight-knit control the Obsidion Order has on its people. I don't think a territory as large as the Federation "8,000 light years across" could be controlled so easily. Dukat also has a live view of the location of the entirety of his fleet DS9 "The Defiant), implying a relatively confined area.

(4) Romulan Star Empire: This one is tricky. They are another single race empire like the Klingon and Cardassian empires, but I believe they make up for it with slightly superior technology (large ships, singularity warp drives, and cloaking devices). The romulans are generally xenophobic, which may hamper their desire to expand. I always got the impression that the Romulan Empire was much smaller than the Federation. For instance, when the Enterprise D encounters the first cube at System J-25 7,000 light years from Earth (which I believe was referenced to be on the other side of Romulan Space), they seem to overshoot it, which is evidence of enclosed borders (TNG "Q Who?"). I think the Romulans generally keep to themselves and control smaller amounts it territory. Their lack of numbers caused them to sign treaties with the Federstion forbidding use of a cloaking device (just speculating that it has to do with the fact it's their only clear advantage)

To sum it up, using a scale method to compare their sizes (and this is just a logical guess) this is how I see it

Taking into consideration Gamma and Delta Quadrant powers, I'd put the following numbers

Dominion: 400 million + (are a nation of members like the federation, and seemingly are the only dominant power in the Gamma Quadrant)

Kazon: 5-10 million (they appear to be cornered at the edge of Galaxy with nowhere to run, not to mention the warring sects)

Voth: Unknown. They seem to work under the radar, so it's really hard to say

Krenim: depends on the timeline!

31
In Star Trek, what is the largest empire/power in the Milky Way Galaxy by sheer size?

20
What are the chase lights under Star Trek viewscreens for?
11
Are the various Star Trek species composed of different races?
28
Federation Technology Adapted From Aliens?
10
In Star Trek, what are the General Orders?
22
What are all the types of colored alerts in Star Trek and what do they do?
11
Why did they make another prequel?