One question I have had since watching Star Wars Episode 1 on BluRay:

When Obi-Wan is dueling Maul after Qui-Gon's death, he hits Maul's lightsaber hilt and cuts it in half. In the movie, one end falls to the ground and the blade vanishes, while Maul continues fighting with the other half of the blade. From what I understand of lightsaber construction, the interior of a double bladed hilt has only one focusing crystal, two blade modifier crystals for length, and one (large) energy cell.

Shouldn't slicing the hilt in half have destroyed the saber completely by damaging the focusing crystal and energy cell? How could Maul continue fighting with one side? Was this Lucas' penchant for theatrics coming through, or is there a valid in-universe reason for it?

[...]
It contained two sets of internal components, one as backup to the other.
[...]
The two hand of the handle could also detached to make two separated lightsabres [sic]. 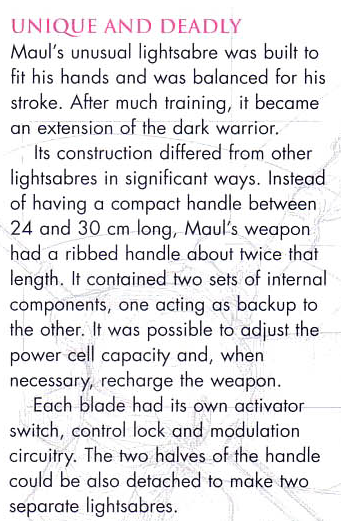 According to the Wookieepedia article, the double-blade lightsaber aka saberstaff, Lightsaber Lance, Doublesaber, Lightstaff, or the Sith lightsaber. Was mostly a simple design of 2 joined lightsabers connected together at the pommel.

The doublesaber design was simplified in later years, retaining a single mechanism, but featuring an enlarged hilt. Whether this was an intentional design change or simply the result of contemporary manufacturers being incapable of replicating the original mechanism is unknown. However, most saberstaff designs were extremely simplistic, consisting of two separate lightsabers with connected pommels, rather than a single mechanism. This design, while less elaborate, also resulted in a considerably lengthened handle, though it otherwise remained the same.

As a reference, Asajj Ventress employed the 2 seperate lightsabers joined together to form the staff, given to her by her master Count Dooku in the Clone Wars series.

As to the specifics of Darth Maul's lightsaber staff I could not find, however from the article above the former does not specify that "single mechanism" is using just one crystal, it could be implied that the mechanics are singular like a normal single lightsaber, but uses two crystal's to ignite both blades. Not entirely impossible scenario when Darth Maul's lightsaber staff was cut in half, that one half would still be viable. As to the latter type of lightsaber staff design, it's basically two lightsaber hilts, so theres no reason why if the join was broken that one half/saber would still function.

All double blades lightsabers have 2 separate systems like 2 lightsabers glued together, plus the crystals are half way or edged towards the emitter the power cells are in the bottom. So if anything the power cells would have been damaged (not the crystal), but seeing as it was cut almost in the middle then both halves would definitely still work

As recorded in the Star Wars archives the original weapon of Darth Maul was in fact a double-bladed single shafted lightsaber, but to allow for a larger varience in fighting technique the saber was modified in design to be seperatable in to two indavidualy working sabers. Although it is possible that when his saber was broken it could have been split not directly in the middle, therefore causing one saber to cease functioning. If this were the case you would have seen sevored components hanging from the hilt of the still functioning saber, while the other you would have seen with an open shaft.

18
Is there a story behind Darth Maul's double bladed lightsaber?