Do we ever see regular (non-stormtrooper) ground troops?

Until recently, my knowledge of Star Wars was based almost exclusively on countless viewings of the original trilogy, and a couple of viewings of the prequels. On this basis, I had assumed that the entire Imperial Army (i.e., the ground troops) was composed of stormtroopers. But I just read the canonical novel Lords of the Sith, and it makes a clear distinction between regular Imperial troops and stormtroopers:

“Bring more stormtroopers? They’ve got a bunch of conscripts and enlistees here now. Nubs looking for adventure, but not true soldiers. Maybe bring more troops, elite troops, and lock down Ryloth and spice production?”
- Star Wars: Lords of the Sith

Fruun was one of Belkor’s men, one of the hundreds whose loyalty he’d bought through favors or secured through blackmail. Moff Mors - lazy, sloppy Delion Mors - left the running of Ryloth’s occupation to Belkor, and Belkor had not been idle. He’d filled several Imperial units with commanders whose first loyalty was not to Mors, or even to the Empire, but to him, and the soldiers would do exactly as their commanders told them. The stormtroopers were a problem, of course, but there weren’t very many members of the corps on Ryloth.
- Star Wars: Lords of the Sith

As far as I can tell, in the original trilogy we see the following: 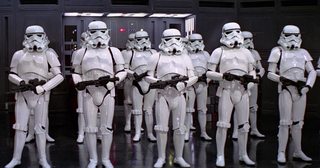 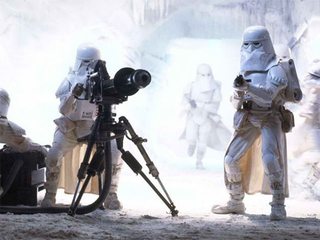 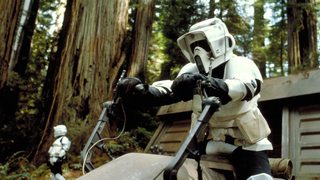 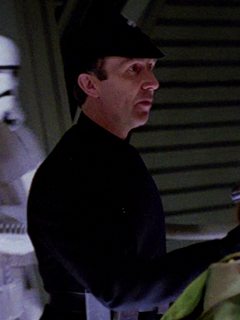 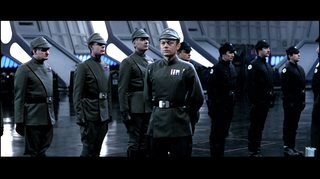 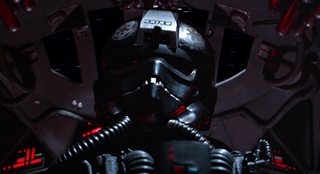 So, if there are ground troops who aren't stormtroopers, where are they? Do we ever see them? What do they look like?

tldr: Ground-based troops besides stormtroopers exist, but don't expect to see them.

The Imperial military in Legends, though non-canon, gives a hint at how the two are possibly used in canon. In Legends, the Stormtrooper Corps exists as a separate institution from the Imperial Army, made up of regular soldiers. Here, the elite stormtroopers are responsible for assaulting the enemy and seizing hostile territory and positions, while Army regulars follow up from behind and secure these conquests as the stormtroopers advanced further at both the tactical and strategic levels.

While we cannot say canon stormtroopers and regulars are used with the exact same differences, it is safe to say that stormtroopers, being elite infantry famed for their loyalty to the Emperor, are at least used in more important deployments. It is reasonable to assume this means:

In other words: You won't ever see regular non-stormtrooper ground troops, because they are only ever deployed to boring assignments on Imperial worlds that will never be published by George Lucas and Disney.

The Legends-only entry for these regular soldiers do describe their appearances though: Their full combat uniform is similar to that worn by General Veers during the Battle of Hoth, as well as Agent Kallus during the ground assault on Seelos. 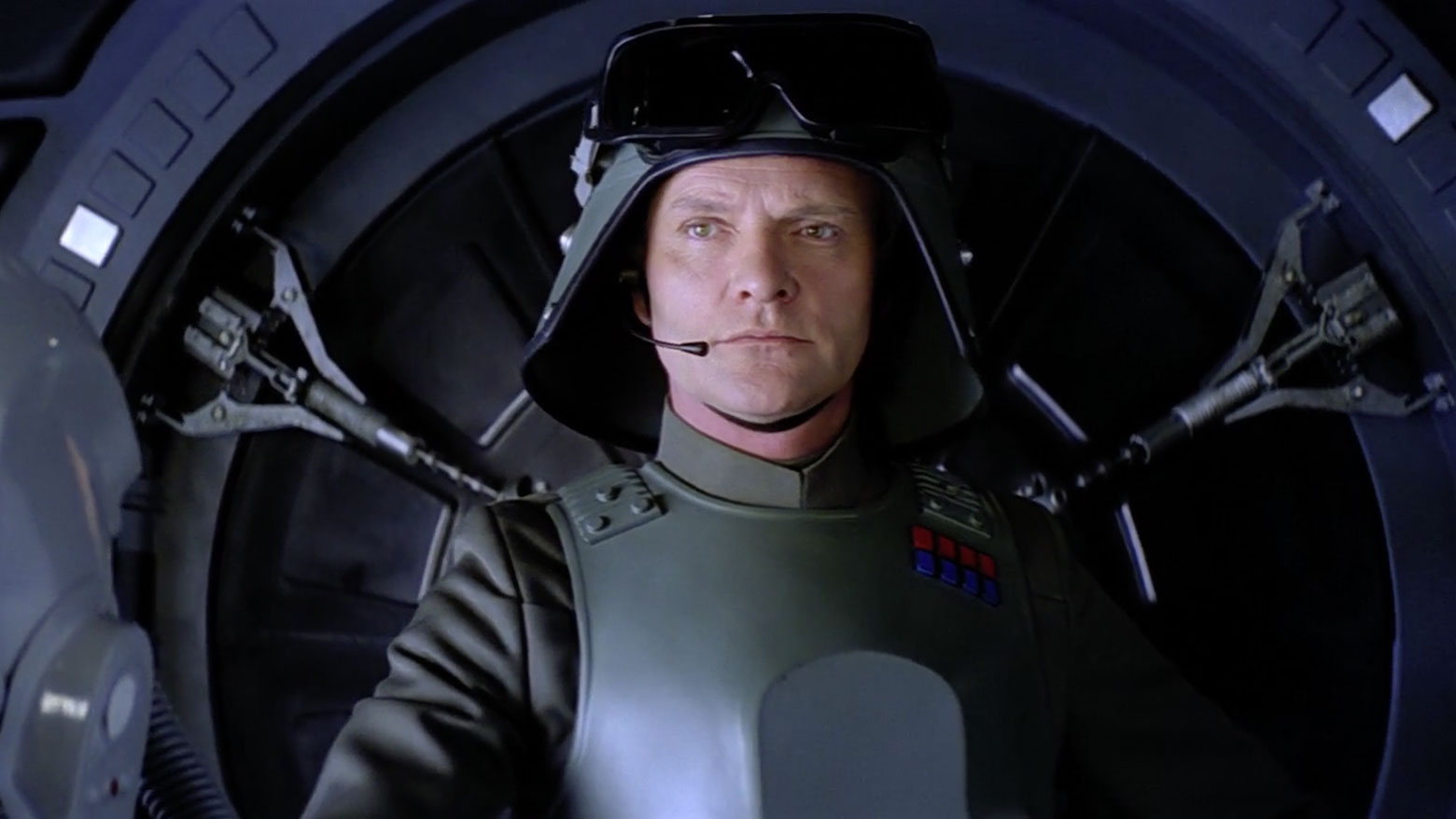 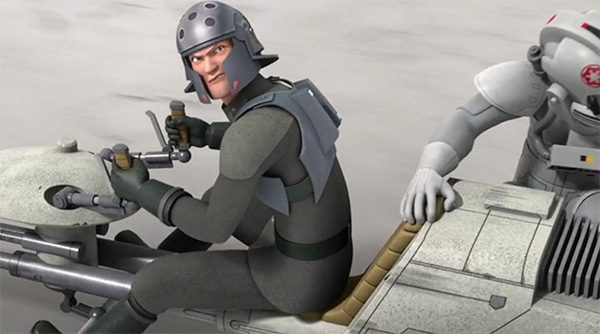 What should be noted here is that Agent Kallus' helmet isn't standard issue, while General Veers' is, and the black thing on the top of his helmet are actually visors (see the wiki article for regular soldiers).

The closest ever shown to non-stormtrooper Army troops is the Imperial Navy Trooper, who do fight on the ground at the Battle of Endor (when the rebels are captured, before the Ewok rescue). See Tempest Force and note the troops in black in the screen capture:

In Solo: A Star Wars Story we see the Imperial unit that Han Solo was assigned to were known as "Mudtroopers".

As defined by Solo: A Star Wars Story - The Official Guide 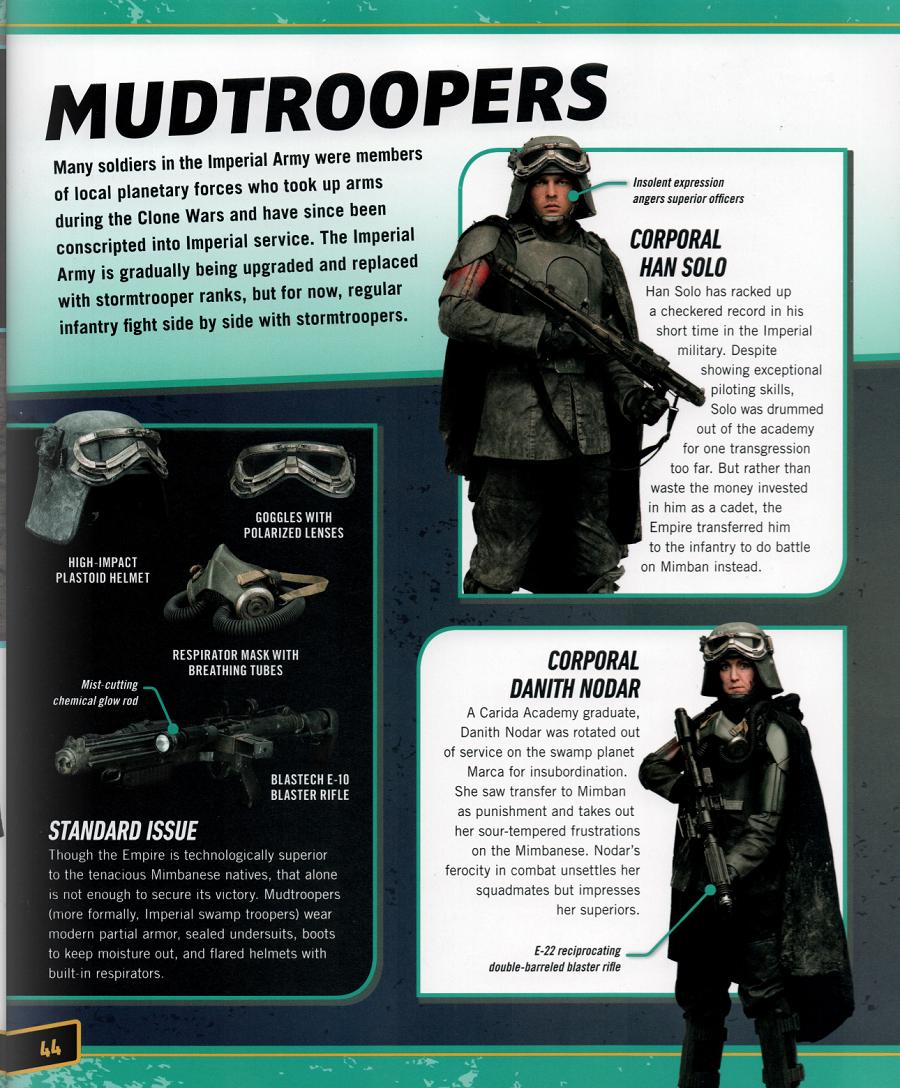 Swamp troopers, known informally as mudtroopers, were a type of Imperial Army soldier used by the Galactic Empire that existed outside the Stormtrooper Corps. [From Wookieepedia]

Since the release of the new Solo movie, and associated publications, we have new information to answer this question.

The Battle of Mimban, which we see in the movie, takes place 10 years before the original trilogy, but by the time of A New Hope, it would seem the entire Imperial Army force had been inducted as Stormtroopers.

Stormtroopers are clones. All of them!

There is ample evidence for this - from publications in the late 1970s from Lucasfilm saying as much, to dialogue in the film

"you are a little short for a Stormtrooper, aren't you?"

This is just Disney changing, once again, what had been canon and making "canon" seem like nonsense. They have changed the story so many times. Initially, George said clearly that the Clones were not programmed to enact Order 66, that it wasn't some genetic code or switch, but just that they were disciplined to enact it. That's what makes Stormtroopers so frightening. They have no sense of humanity and they are not conscripts. They are specialized troopers as a direct offshoot of the Emperor's will. They have no mercy. They have no humanity. That was GL's vision.

12
Does Solo serve as a Stormtrooper?
8
Is the command chain of the Imperial military in Star Wars ever detailed in canon?

7
Has the Galactic Empire ever conducted large scale ground battles?
10
Chronologically, when does the Death Star scene of Revenge of the Sith take place?
16
Were any Imperial troops or high-ranking authorities killed when the Death Star destroyed Alderaan?
10
Are there examples of the Empire fighting itself?
8
Is the command chain of the Imperial military in Star Wars ever detailed in canon?
14
What is the symbol on the pauldron of the storm troopers who guard Grand Admiral Thrawn's office?
4
Was Imperial Navy based on Imperial Japanese Navy?
3
Do Stormtroopers or Imperial officers receive vacation?
12
Does Solo serve as a Stormtrooper?
13
Were the distinctive elements of the uniforms snow troopers from The Empire Strikes Back based on any particular real-world uniforms?