In Star Trek genarations, data is seen drinking alcohol which he hates, how is he able to taste and consume it, I remember form a previous episode in the series he is not able to consume food or liquid

In that scene in particular, he had previously installed Lore's emotion chip which is what causes the reaction

In the Season 1 episode "Datalore" - Lore "spikes" a drink that incapacitates Data. Data and Lore both seem to accept that they can drink.

From the episode Deja Q:

The (kinda canon, kinda not) supplement to the official Trek RPG game has a schematic of Cmdr Data's upper body. As you can see from the labelled diagram, his chest cavity includes a "digestive enhancer" (with a label that goes behind his body to where his anus would be), strongly implying that he can ingest food and drink as well as disposing of it in a convincingly human fashion. 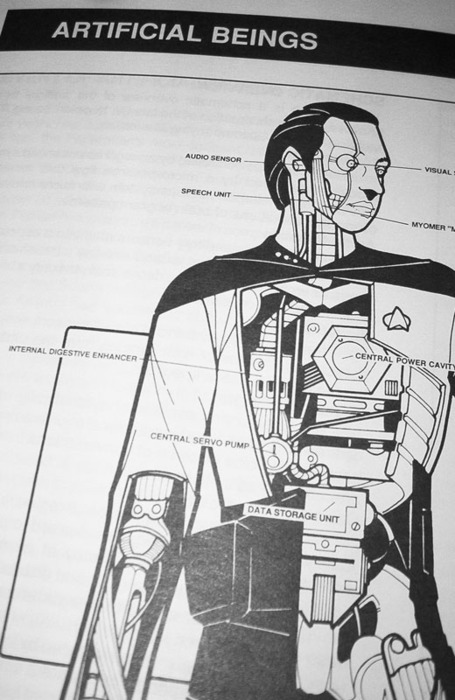 Not the answer you're looking for? Browse other questions tagged star-trek star-trek-tng star-trek-generations or ask your own question.

10
What happens to the food that Commander Data digests or drinks?

36
Does Data adhere to the Three Laws of Robotics?
17
How could the Picard Maneuver confuse sensors from the Warp Era?
10
What happens to the food that Commander Data digests or drinks?
25
When was Data made bullet proof/resistant?
9
How does Data maintain his personal hygiene?
28
Did Data have enough memory or “hard drive space”?
32
How is Data alive in “All Good Things” when he died in Nemesis?
0
How does Data know what Bingo is but not what perfume is?
18
Which Star Trek:TNG episode does Data asks Picard whether a human has a moral obligation to use augmented prosthetic?
24
How did Data not know what Aldebaran Whiskey was?