What is Klingon hell? Is it really the Klingon afterlife?

What is Klingon hell? Is it another planet, an illusion, just a dream, or is it really the afterlife?

It was intended to be a real place on a planet in the Klingon Empire, and would have been discovered in an undeveloped storyline in DS9.

The Klingon belief system involves an afterlife consisting of two zones: Sto-vo-kor, where the honoured dead are welcomed by Kahless himself and rewarded with an endless battle against formidable enemies. The other zone is an underworld, Gre'Thor, where the dishonoured dead are confined after travelling in the Barge of the Dead along the River of Blood, to be terrorized by the monster Fek'lhr for all time.

Bits and pieces of lore regarding Sto-vo-kor are revealed in TNG and DS9. As for Gre'Thor, nearly everything we know about it comes from the Voyager episode "Barge of the Dead". In this episode, B'Elanna has an extended vision in which her mother is on her way to Gre'Thor as punishment for B'Elanna's dishonour. Here are the gates of Gre'Thor as seen in that episode: 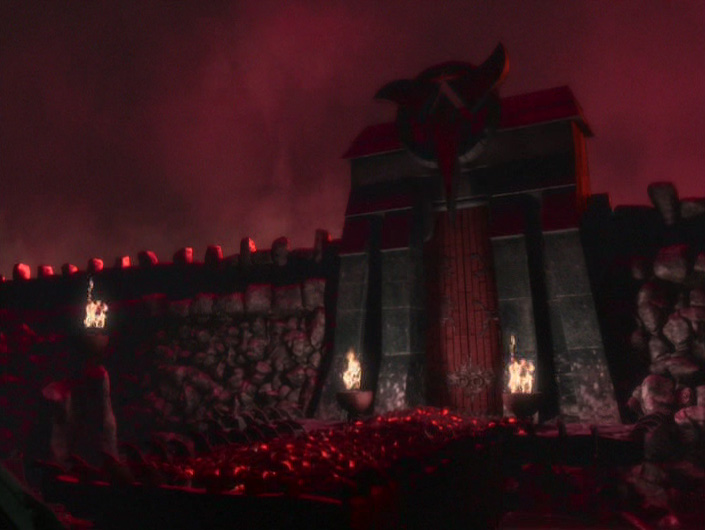 It is unclear from that episode alone whether Gre'Thor is a "real place" in our universe / some extra-dimensional plane or if it is some illusion. B'Elanna's vision of Gre'Thor may have been just that — a vision, and nothing more.

However, there is evidence that the writers intended Gre'Thor to be a real location within the Klingon Empire, but the idea was not developed. According to the Star Trek: Deep Space Nine Companion:

An early draft of the Star Trek: Deep Space Nine episode "Soldiers of the Empire" had Worf, Martok, and the crew of the IKS Rotarran finding the entrance to Gre'thor on a Klingon planet. Martok and Worf were to have entered to save a friend of Martok's and would have encountered Worf's father Mogh. The idea was dropped as it was deemed too late in the season to tackle such a philosophical idea as Klingon hell.

Gre'Thor, which is the Klingon hell, is not on a planet nor was it ever to be discovered in an episode of Deep Space 9.

Gre'Thor is the place where the spirits of dishonored Klingons go after their life ends. According to the Voyager episode "Barge of the Dead" the souls of those who died without honor travel on the Barge of the Dead until they reach the gates of Gre'Thor. They are then thrown from the barge and into Gre'Thor.

This episode explicitly states there is an actual afterlife.

Not the answer you're looking for? Browse other questions tagged star-trek star-trek-ds9 star-trek-voyager klingon theology or ask your own question.