Do People In the Matrix Feel Anything Their Real Body Feels?

When someone is in the Matrix (under normal conditions), do they have any awareness of the sounds their ears would hear in their "real" body? Do they feel any sensations that their real body feels?

Bodies are normally kept in tanks where the climate and anything going on around the body are tightly controlled, so it's possible the Machines need that kind of control to avoid distracting sensations in the real world.

Note: While one could say that Neo responded to Trinity's kiss (or not - I guess that's another question), that's after he is killed in the Matrix, so it's an exception which would not prove if a person would normally feel "real world" sensations while in the Matrix.

I doubt they do. As Aidan points out in the comments to your question, the people laying 10 feet from the operator must use in-Matrix phones to talk to him.

In order for the simulation to be as close to perfect as it is, the machines must intercept and discard outside stimulus - this is the most likely purpose of the goo cells - they are a form of sensory deprivation tank that likely makes the elimination of outside stimuli easier.

I doubt that the interference of outside stimuli is significant - none of the operatives we see in the Matrix are getting distracted by physical sensations - not even when Cypher is touching them or jumping on them.

Most likely, their awareness of their physical body is subconscious. It could be just enough to keep them on edge in the Matrix, giving them the sensation that something isn't quite right. This could even be helpful to them, a constant reminder that they aren't breathing air, and that they aren't fully bounded by the physical limits imposed upon them.

Given that you see them 'Jack-in' via a jack at the base (more or less) of their skulls, I would guess that the jack short-circuits the regular neural process, although possibly routing the data to the Matrix system, in case of relevance. (I.e., the machine uses the sensory feedback to identify issues that may occur with the real body, such as loss of fluid in the pod. Possibly it sends limited neural commands BACK to induce twitching in the muscles, to keep atrophy from getting TOO excessive; note that people pulled from the pods are weak.. but not as atrophied as you would expect from a life time of no movement.)

That being said, I don't know that the revolution uses the exact same technology; if they are simply stealing it and re-purposing it, it may function in the same way. We do see physiological info on the users when they are jacked in, so it's not unreasonable to assume that the data is being passed; it would then be up to the system it's being passed to to determine how much, if any of it, to pass back up the line to the user's brain. Based on their lack of response when Cypher is interacting with their 'real' bodies, it seems likely that their system, too, captures all local data and doesn't pass it back to the brain.

I would guess that this also explains why disconnecting someone before they 'Jack-out' kills them; the circuits are still in Interupt mode, passing data along the jack, not from the body to the brain. Jacking-out resynchronizes them to each other. Failure to jack-out before losing the connection results in a loss of data flow from the brain to the body, which, among other things, would result in a ceasing of the heartbeat, breathing, and so forth, causing death very quickly.

This is covered in the Matrix comic "There Are No Flowers in the Real World". In short, if your real-world body is damaged/dying, you'll feel some feedback inside the Matrix. The system seems to insulate you from the full extent of the injury, albeit with varying degrees of success.

The body cannot live without the mind.

The reverse also seems to be true. 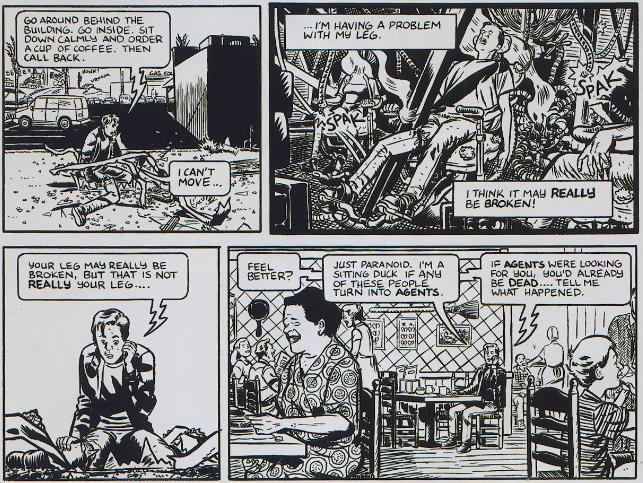 47
Why did the mirror repair itself in front of Neo?
25
Why Did Neo Think His Powers Would Work Outside the Matrix?
6
How does an outsider's dead body continue to exist in The Matrix?
46
How do people in the Matrix develop a residual self image that resembles their own body?
8
Relationship of illness outside the Matrix to illness inside the Matrix
45
Did Smith kill every person in the Matrix?
5
What was Smith's plan to take over Zion?
0
Why can the One fly & stop bullets?