Did the Original Enterprise Have Landing Gear?

This is something that's bothered since, well, literally since the 1960s. On the original Enterprise (NCC-1701) there are two long triangular regions marked on the bottom of the saucer section (circled in red in the picture below). I never saw anything documented about what these regions were, but it looks as if they could extend, like landing gear, to balance the ship if it had to land on a planet. Or they could be used for balance if the saucer section separated and landed independently.

Are these things some kind of landing gear? If not, is there any documentation about what they are? 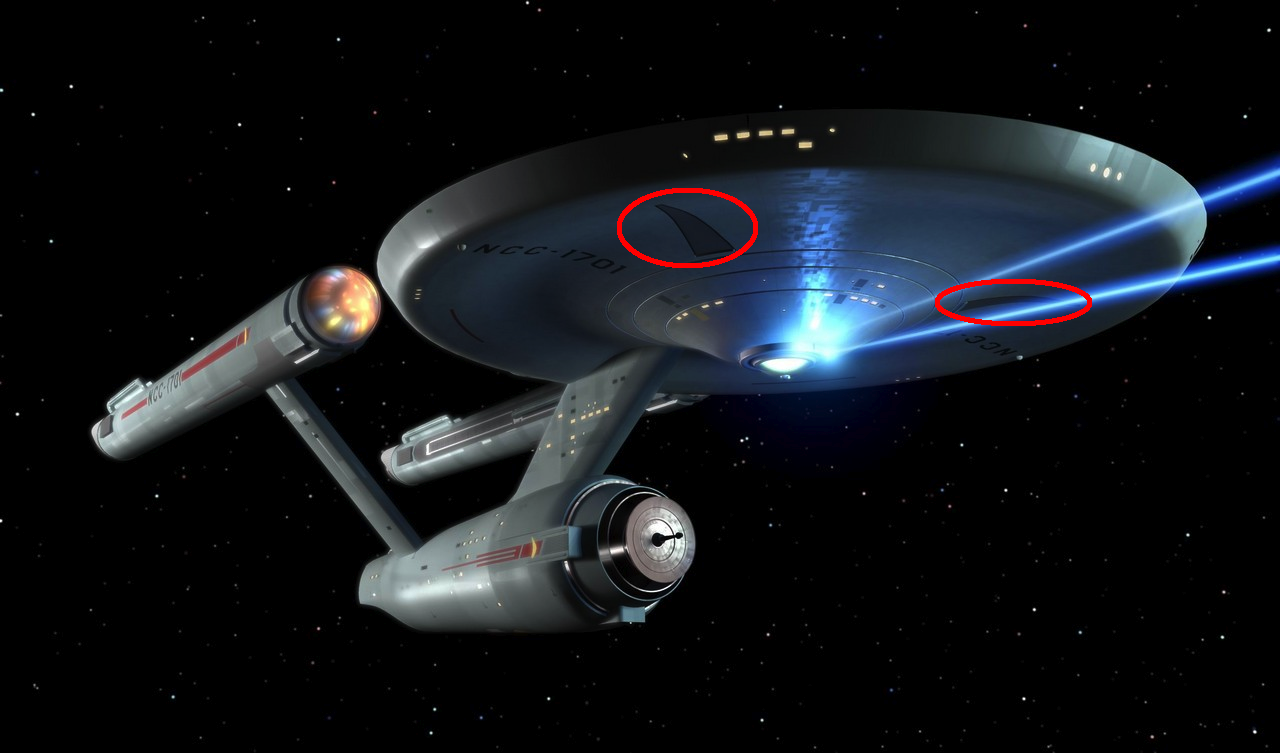 According to Mr. Scott's Guide to the Enterprise, the original Enterprise had landing gear stored underneath the two triangle-shaped hatches on the ventral side of the saucer. A third leg popped out from the cavity where the secondary hull connected to the saucer. (Star Trek: The Magazine, August 2000).

Apparently this landing gear was designed for landing just the saucer section (in an emergency), not the entire ship. 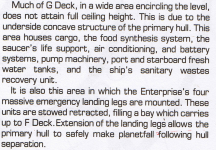 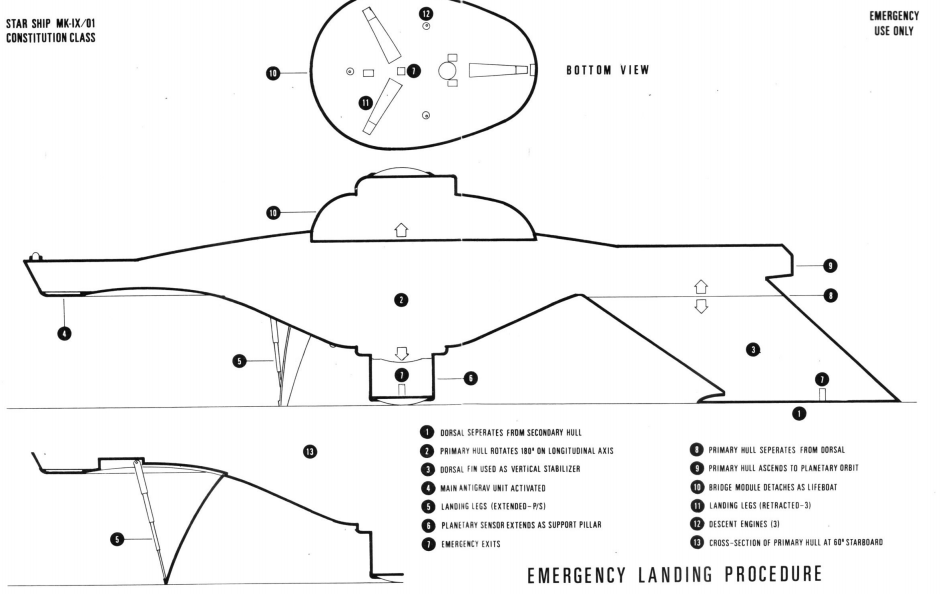 Might be worth noting that although Gregory Mandel was a production artist for Trek, that was after he wrote the USS Enterprise Officer's Manual, which at the time (1980) was a fan creation since he wasn't affiliated with the show in any way. Unlike another popular fan creation, the Star Fleet Technical Manual by Franz Joseph, I don't think Mandel's book was ever licensed by CBS/Paramount so it seems odd to call it "semi-canon", that'd be like calling Star Trek: Phase II semi-canon because it's popular and well-made.

I was able to find confirmation from a production designer, Andrew Probert (who helped design both the refit Enterprise from the films and the Enterprise-D), that the refit Enterprise was intended to have landing gear, although he himself is unsure whether it was the intent of the original Enterprise's designer, Matt Jefferies, that the triangles on the bottom of the first Enterprise were meant to be landing gear. In the box set of blueprints in Star Trek: The Next Generation USS Enterprise NCC-1701-D Blueprints there's a booklet with a roundtable interview featuring several production designers, and on p. 8 Probert says:

The Enterprise saucer was always designed to separate from the Engineering section. I knew about this when I did Star Trek: The Motion Picture. And if you look at the bottom of Kirk's Enterprise, you'll notice two triangular items, which are two of the landing feet for the saucer. Regardless of whether it was Matt Jeffries's [sic] original intention or not, it's sort of the way that Trekdom or Star Trek lore has labeled those features. So taking my cue from that for Star Trek: The Motion Picture, I placed four landing legs in the bottom of the Enterprise and created a very specific separation line on the dorsal.

There was also a set of officially-licensed blueprints for the first film, Star Trek: The Motion Picture Blueprints, which was based on the production designs of Andrew Probert and Lee Cole, and it labeled the landing pads as such (thumbnail images from the book can be seen on this page), so I think it can be considered pretty close to canonical that the refit Enterprise had landing pads.

Notwithstanding Mr Scott's Guide to the Enterprise the book The Making of Star Trek by Stephen E Whitfield quotes the original series guide for writers: "The Enterprise is not designed to land on a planet". I guess you can decide who is more reliable - a great (but fictional) engineer, or the author of the series.

The Franz Joseph deckplans do not show landing gear, nor do Matt Jefferies' construction plans for the shooting models.

Mr. Scott's Guide matches several novels, but mention wasn't made in the film, nor on the shooting model's plans, nor in the Series "Bible," so it's at best questionable, and doesn't match other established fannon, let alone canon.

Yes, those triangles are two of the three landing 'legs', the third being stowed in the dorsal.

In the episode: "The Apple" Kirk tells Scotty to "Break out of there with the main section" meaning the ship's primary hull: the saucer.

Since Star Trek is based/influenced somewhat by Forbidden Planet and the saucer the C-57-D and in general looks etc I read in a copy of Starlog or some such years ago that the "Saucer" section was meant to land on Planets leaving the rest of the ship in orbit. This proved too costly to film every time so the production team came up with the idea of transporters and Shuttles. Which leaves the big plot holes you get sometimes about using transporters when the crew could use shuttle craft or vice versa.

Another possibility would be that these are simply hatches used for the refueling and reloading of the ship (or even the direct transfert of people) when it's docked to a spaceport.

They could also be used for the secure attachment of the ship to the dock.

It was stated before that the saucer section on all versions could separate when in orbit. but the TOS thru the Enterprise C required a spacedock for reattachment. The D and E could de-mate and re-mate at will.

In the Novel "A Flag Full Of Stars" Scotty is on site to watch the newly refitted saucer section launch from the San Francisco Naval yards to earth orbit to be re-mated with the secondary hull. He stated that the saucer did in-fact take off from the ground to orbit under it's own power. This occurred prior to the events in "ST-TMP"

Mrs. Tribbles, the ship's cat probably wrote the most correct answer. Star Trek was not thought out that far when the model of the Enterprise was built. The concept of the entire ship landing on a planet was never considered, but having the saucer section detach and land by itself was hardly more outlandish than the concept of transporters. Of course, screenshots of the ship on the surface of another planet every week would be impossibly expensive. Still, the basic model of the spaceship had to be built to match whatever the writers were going to do. If they wanted the saucer to pop off and land, the parts had to be there. As they wrote the idea out of the first pilot, and the detail for the landing struts didn't hurt anything, they stayed there. By the time the production crew got around to drawing blueprints for the Enterprise, the concept of landing gear was completely forgotten. In short, those triangles are a artifacts from a time when the production crew had no idea of how the characters were supposed to leave the ship every week.

33
Why did Starfleet choose saucer-shaped starship design?
32
Could the original or other Enterprises' saucers separate?
11
Are Galaxy or Constitution class ships capable of landing?
1
Why are Star Trek Federation ships white?