What happened to the Lassiter?

In Trash, the crew steals a very valuable, antique laser pistol known as the Lassiter.

In The Message, Mal mentions that he's having difficulty selling it.

MAL: It's like something out of a fable! I've got this priceless artifact, the biggest score of my unseemly career, and no one will touch it.

INARA: The Lassiter's universally known. Fencing it is like... fencing the Mona Lisa.

In Serenity, which takes place pretty soon after, Mal is so desperate for money that he goes into straight-up armed robbery.

So what happened to the Lassiter? Were they not able to sell it? If so, what did they do with it?

This is addressed in the film's official novelisation. In short, they sold it and used the funds to upgrade the Serenity.

This [The Serenity] was Mal's pride and joy. A while back, they got their hands on one of the few remaining Lassiters, one of the early laser pistols. Expensive as hell, they'd lifted it from right under the nose of a rich gent name of Durran from his estate on Belerophon. Took a spell to find a buyer for so major an item, but a buyer they did find, and the funds went to purchase a fancy new mule.

Inara seemed to think that she knew people who could afford it, so it's possible that one of her contacts ended up taking it off them for a fat fee.

MAL: It's like something out of a fable! I've got this priceless artifact, the biggest score of my unseemly career, and no one will touch it.
INARA: The Lassiter's universally known. Fencing it is like... fencing the Mona Lisa.
MAL: Well... Mona Who?
INARA: You're out of your league. You should consider my offer --
MAL: I done thinking about that, and you ought to stay clear.
INARA: I know people in the highest ranks of --
MAL: Jabber jabber jabber. I ain't listening. Just 'cause you helped out on the job don't make you a crook. I will not have you jeopardizing your career over this.

As to the proceeds of the sale, by the time of the film Serenity (supposedly set several months later) we see that the ship has been radically overhauled with a much larger dining area, a dedicated ship's kitchen, a medical bay with a fancy new medi-bed and all sorts of scanners and gizmos, not to mention that the exterior seems to be sporting a new wing design and the flashy new hover-mule.

It seems reasonably likely that that sort of work would require a lot of money, the kind of cash you'd get from selling a priceless artifact, even at a whomping discount.

The show was cancelled. The Lassiter was featured in the third to last last episode of the series, with the last two episodes completely ignoring that plot thread.

However, we don't know what happened to it, in-universe. Suffice to say, it was too hard to fence; Mal had voiced such in The Message and the crew is later seen to still be quite destitute, later, in the film. This would not be possible had it been fenced, as it was a 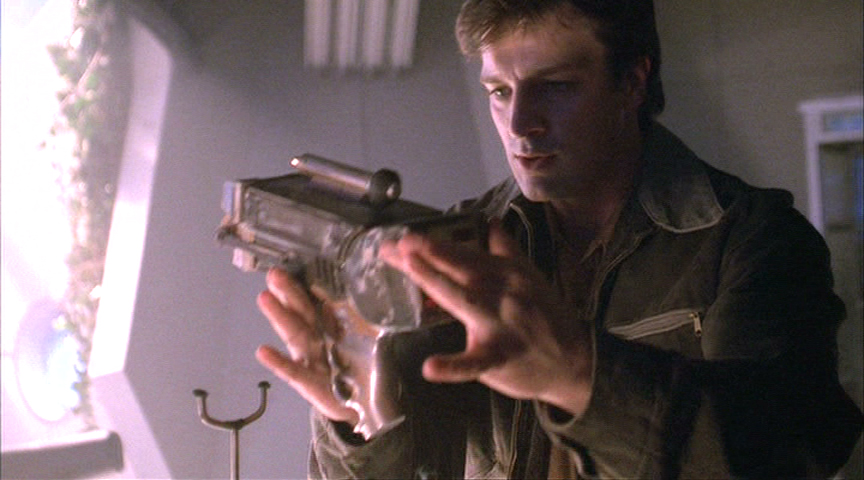 The Lassiter was sold before Serenity and that helped pay for the ship upgrades. QMX stated as much when advertising the official blueprints of Serenity they had for sale years ago. I bought a set of them. They're quite shiny.

The one thing everyone seems to be forgetting about is Jubal Early's ship as illegal salvagers and theives the crew would not just leave it in the middle of nowhere they either sold the ship or sold its location to a third party.

That could explain all of the upgrades to Serenity. Its possible they are still holding or unloaded the Lassiter for far less than the 1mil promised or they wouldn't need to steal anymore. Or at least keep Primary Buffer Panels attached.

To put their currency into perspective the first job in the Firefly series they sold a years worth of food and antibiotic suppliments enough for a whole settlement for only $200 (Platinum). Which was enough for Food, Repairs and Fuel. All of this after paying the crew their respective cuts.

For my money they accepted they couldnt sell it them selves and sold it for pennies on the dolar to one of their contacts or unloaded it descretely. Mal would be against carrying large sums of money or valuable cargo for any extended period of time.

Not the answer you're looking for? Browse other questions tagged weapon firefly serenity or ask your own question.

32
How are the series Firefly and the movie Serenity linked?
40
In the movie Serenity why can't they transmit video?
33
How Close was "Serenity" to The Planned "Firefly" Storyline?
9
What Is Shepherd Book's Religion?
33
How do the ships in Firefly travel immense distances?
27
Is there any more media in the Firefly/Serenity universe?
40
Why didn't the Reavers murder and mutilate everyone on Miranda?
28
Are all of the Reavers and Alliance destroyed in the final battle in Serenity?
14
Why did the details of River's rescue change for the movie Serenity?