Spider-Man comic with several villains in it

A long time ago I read a Spider-Man comic of which I'm trying to find the name. One memorable quote was from a villain who was complaining that he "had millions, lost millions". Also, there was a dinosaur-like villain who broke into an aquarium and terrorized the people, but then picked up a fish who fell out of its tank and put it back in water, saying, "there is no reason for a non-human creature to suffer". At the end of it, it showed Doctor Octopus welding himself a new set of metal arms. I think Spider-Man was captured and restrained the entire comic.

Anybody know what I'm talking about?

Thunderforge was right! I was thinking of "Spider-Man - Lethal Foes Of Spider-Man: Hate Is A Many Splendored Thing". Here is the page I was referring to with Beetle 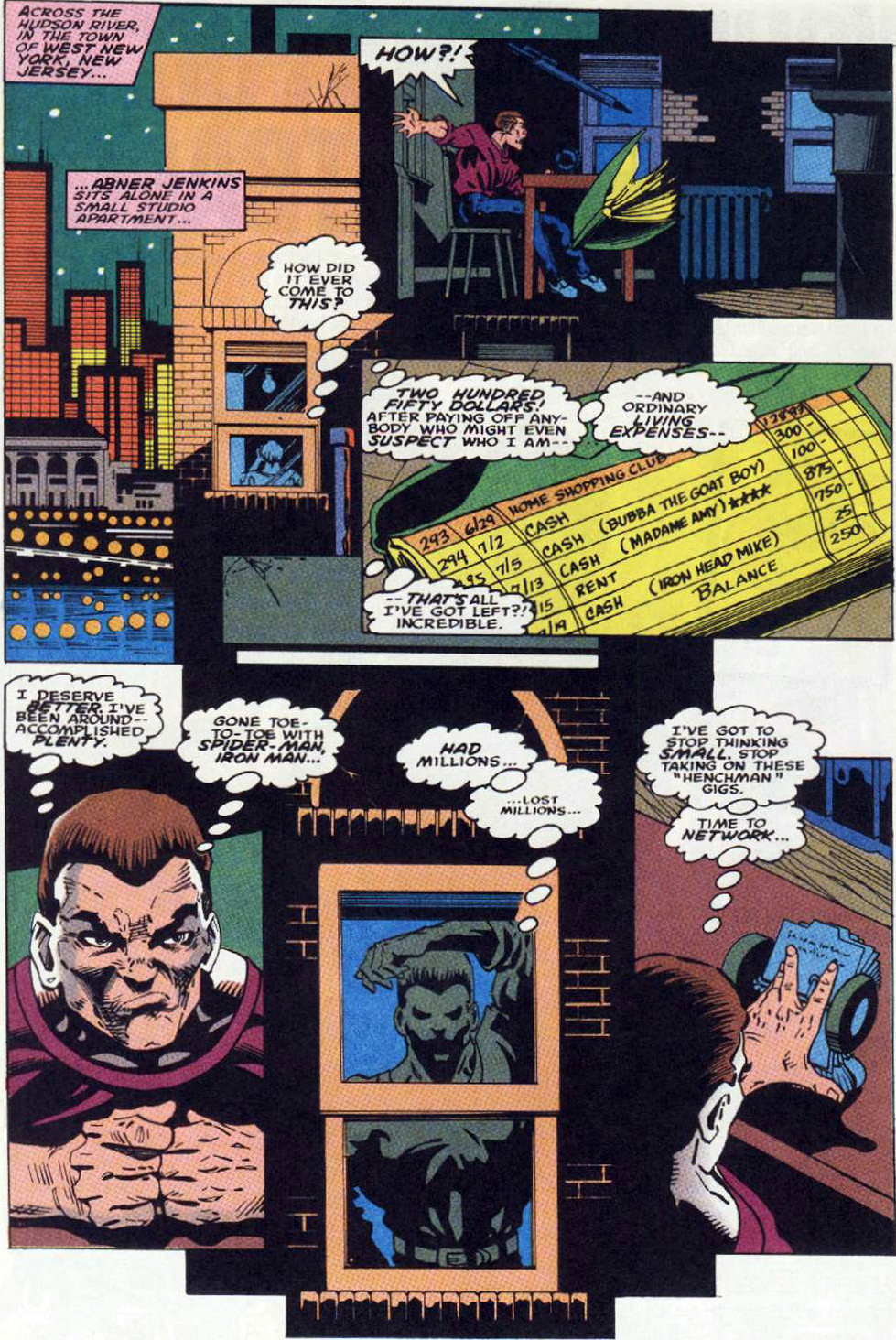 Best guess is that this is The Lethal Foes of Spider-Man, a four-issue series from 1993.

One thing that stands out in your description is that there are three villains present. This is unusual as most Spider-Man comics focus on one, maybe two villains. Also unusual is the fact that Spider-Man isn't present for most of the comic, despite being the protagonist.

You mentioned that there was a dinosaur-guy. That could only be Stegron. Fortunately, he isn't too common of a Spider-Man villain and has only appeared a few dozen times. The only time that he appeared in a comic with Doctor Octopus was in The Lethal Foes of Spider-Man. There were other villains that appeared as well, which explains the presence of a third villain.

The villain who had made and lost millions is harder to say. Including your comments, it sounds like perhaps it was Harry Osborn since he was wealthy, had the Green Goblin glider, and to my knowledge lived alone. However, he wasn't in this comic, so if it was him, then you're probably mixing your memories of two comics. The Vulture was in the comic though, and had the ability to fly through his special suit (perhaps confusing flying with the hoverboard?), but to my knowledge he has never had stubble. He's not known to be rich, but I suppose his life of crime might have amounted to him stealing and subsequently losing millions.

Unfortunately, I'm not able to confirm whether or not this is the comic you are after. Surprisingly, I was unable to find a single description of the plot of the comic anywhere online. Also, I don't own it, and it's not on Marvel Unlimited, so I can't check myself.

Still, this seems like the most likely candidate given that it's the only comic containing both Stegron and Doctor Octopus, and a comic focusing on the villains seems like it would probably find an excuse to get Spider-Man out of the picture.

Not the answer you're looking for? Browse other questions tagged story-identification marvel spider-man or ask your own question.

14
Which Spider-man comic series aligns closest with the 1994 animated TV series?
2
Which continuity does the 2015 Amazing Spider-Man comic take part in?
4
Identify a Spider-Man comic featuring Spider-Man saving Jameson's astronaut son
10
Marvel Comic with Ant-Man and Spider-Man holding a weapon
10
Spider-Man and Fantastic 4 crossover comic with Double Identity Scene
10
Why did Miles Morales get non-spider-like powers (bio-electrokinesis and invisibility) that are vastly different from the other spider people?
5
When or how precisely did Venom (Eddie Brock) turn from villain to hero?
1
Spider-Man comic with him complaining about New York
9
Looking for a Spider-Man comic from the 1970s where a telepathic man-child controls a town, is defeated when Spidey "deafens" him?