Could you fit a Borg cube in the Voth city-ship?

On Memory Alpha, a Borg Cube is described as:

Borg cubes were massive in size, measuring over three kilometers across

(Which would be each direction)

Whilst Memory Beta says the Voth City ship measured over 4.9 km in length.

Looking at this size comparison chart, we see that the Borg Cube is substantially taller than the Voth City ship:

This picture comparing the two, both at depicted at the same scale, 1 pixel to 10 meters, should help to answer: 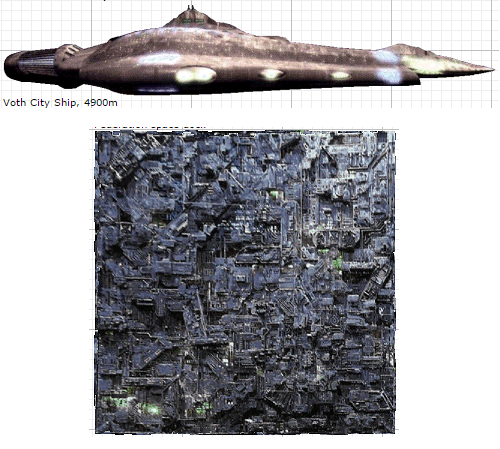 And with the two overlaid: 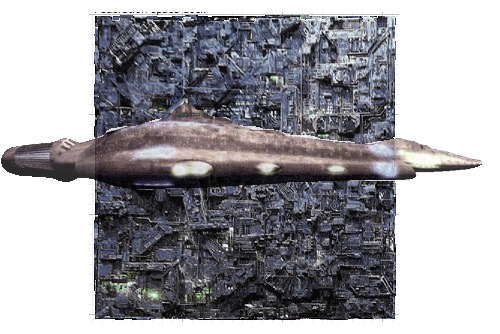 These images are from the excellent Jeff Russells Starship Comparison Guide

The figures used to create these images to scale are from Memory Alpha - citing the Cubes size as:

...measuring over three kilometers across and possessing an internal volume of 27 cubic kilometers.

Even though this only confirms length, the to scale drawings show clearly that, despite being long enough, the Borg Cube would not fit inside the Voth City Ship as it is far too tall.

You might be able to squeeze 1 DS9 into the Voth City Ship if you got the angles right, and if the Voth City ship is wider than it is tall, which it appears to be. If you took the pylons off or pushed them down you could fit many more in.

Again to scale with each other at 1 pixel to 10 meters. 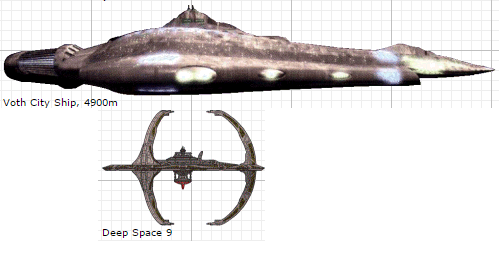 Size of DS9 as given in Memory Alpha

Rick Sternbach's drawings for a four-foot miniature (six-foot as built) specify a scale of 70 feet to an inch, resulting in a conceptual diameter of roughly 3,360 feet (1,024 meters).

For Star Trek: Deep Space Nine Technical Manual, Sternbach compromised at 1,451.82 meters (4,763.19 feet), although the new size matches only Doug Drexler's images of the exterior in the book, not his cutaways which depict a smaller station.

Not the answer you're looking for? Browse other questions tagged star-trek star-trek-voyager borg or ask your own question.

24
Could a ship warp into Borg cube and destroy it?
9
Which vessels in the Star Trek universe have beaten a Galaxy Class starship in one-on-one combat?
59
Do the Q fear the Borg?
31
Why weren't civilians evacuated before the fleet at Wolf 359 engaged the borg?
9
Did Tuvok, B'Elanna, and Janeway live the rest of their lives with Borg implants/technology inside of them?
17
Were the Borg Always intended to be a Delta Quadrant power?
6
Why would passage through Borg space take too much time?
11
What is the end state of a starship that has been assimilated by the Borg?
4
Why can the Enterprise scan the Paulson Nebula but the Borg vessel can't?