How come an older Jadzia Dax appears in DS9 ‘The Visitor’?

A UK TV channel has been re-running this here and have just shown an episode, The Visitor, where Sisko meets a much-older Jake.

Not the most gripping episode, but the future includes an older and noticeably-wrinkly Jadzia. 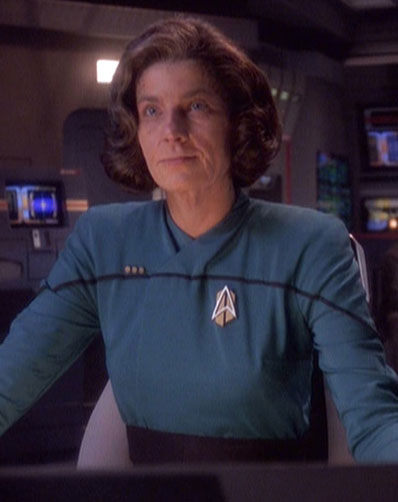 But didn't she get killed in a later episode on the main timeline?

The main theme of that episode (DS9: The Visitor) is that Jake's father was trapped in time. By freeing him, Jake caused that particular timeline to cease to exist.

JAKE SR: You see, Melanie, after the last attempt to rescue my father failed, I spent months trying to figure out what went wrong. Eventually, I came to understand the nature of what was happening to him. It was as if he was frozen in time at the moment of the accident, and the link between us was like an elastic cord. Every so often the cord would go taut enough to yank him forward into my time. But only for a few minutes. I realised that if my motion through time came to a stop, the cord would go slack and he'd be lost in subspace forever. But if I could cut the cord when the link was at its strongest, while we were together, he'd return to the moment of the accident.

Given that Jadzia died as a direct consequence of Ben's ongoing feud with Dukat, it would appear that his disappearance resulted in her not dying in season 6

Not the answer you're looking for? Browse other questions tagged star-trek star-trek-ds9 parallel-universe or ask your own question.

4
Why didn't Sisko die as forseen at the end of Deep Space Nine?

21
Has anyone on Star Trek traveled into the future without a future intermediary?
7
How does Jadzia Dax not remember Joran in Equilibrium?
13
Help Identifying an Alternative History Novel
11
Wouldn't a Star Trek mirror universe become unrecognisable within a few generations?
8
Do the Jem'hadar contain a tinge of compassion, empathy, and fairness which goes against their genetic encoding?
3
Was Ezri Dax's hairstyle based on Mirror Jadzia Dax?
7
How did Arandis recognize Jadzia as Dax?
4
Why didn't Sisko die as forseen at the end of Deep Space Nine?
2
Which was the fate of the Enterprise C in “Yesterday's Enterprise” alternate timeline?
6
Why would mirror Jadzia be joined to Dax?