What is supposed to happen on "The Day when All are One"?

In the iconic 80's feature animated film, Transformers: The Movie, the Autobots mention:

the Day when All are One.

The Transformers United Without Enmity or War

In the aftermath of the battle with Unicron, Rodimus Prime's optimistic speech is met with the response "'til all are one!" (the image below is from the comic adaptation of the movie). 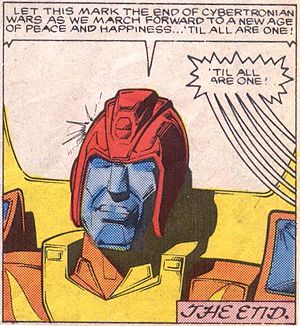 Reformed and transfigured by the Creation Matrix, Rodimus clearly understands his (almost Messianic) role in terms of an end to hostilities with the Decepticons (with whom the Autobots have been briefly united by the existential threat of Unicron) and the ushering in of a peaceful age where the badges of Autobot and Decepticon are no longer needed.

For more about this phrase, see this page on TFwiki.

The phrase has never been fully explained in canon. However, there are a few possibilities:

17
Why can only Decepticons fly in robot mode?
12
Why does only Hot Rod get magically reformatted by the Matrix of Leadership?
3
Are the Dinobots unintelligent or just very aggressive?
6
Does the Matrix of Leadership work for Transformers of any affiliation?
13
Is Optimus Prime as we know him one of the Thirteen Original Primes?
4
Does Devastator have a weak spot?
12
Looking for name of Soundwave's Autobot counterpart