Who has creative control of Star Wars?

Before he sold the rights to Disney, George Lucas was the ultimate word of God in the Star Wars universe.

Now we have a corporation who owns it. There are any number of writers and directors looking involved. Does anyone have ultimate creative control?

Is there a plan that the stories fit into, or is it being made up as they go along?

The Lucasfilm Story Group is a division of Lucasfilm, created after the Disney acquisition; it's their job to keep the Star Wars canon as internally consistent as possible, and to guide its development.

Pablo Hidalgo, a member of the LSG and one of the "continuity trio" sub-group, commented on Twitter that much of his job involves high-level storyline planning, and making notes on new in-progress stories: 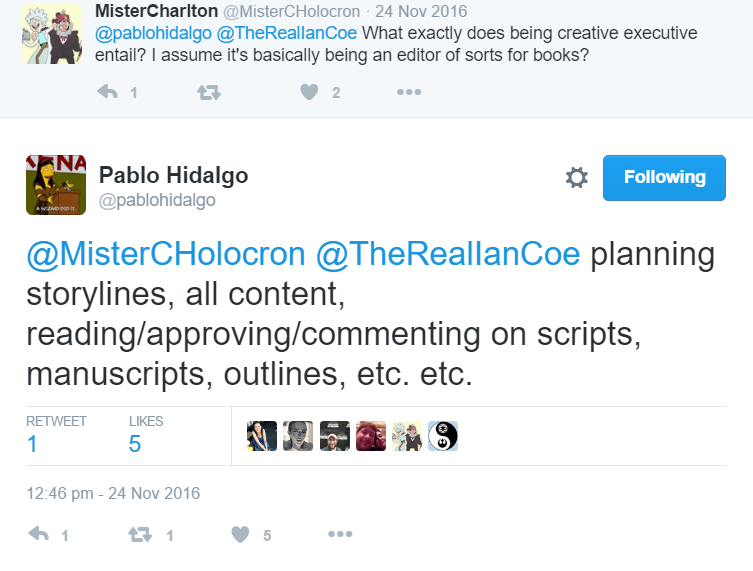 @MisterCHolocron What exactly does being creative executive entail? I assume it's basically being an editor of sorts for books?

...but writers have the freedom to tell the stories they want to tell

However, Lucasfilm affords a great deal of creative leeway to the individual creators; as a Slashfilm article reports, based on the LSG live panel from Celebration Anaheim 2015, and as Hidalgo notes on Twitter, the Story Group doesn't dictate stories, just provides makes sure stories are being told at the right time:

The first point made at the panel was that the Story Group has a long game plan. They have major beats and ideas spanning probably years or maybe decades in advance (Note: no specific time frame was given) so as to be able to incorporate everything Star Wars is becoming.

While the term “Story Group” may make it sound like they are dictating the story, that’s not usually the case. In most cases, authors or filmmakers who are hired to work on Star Wars properties, are given the oppurtunity [sic] to come up with their own stories and ideas. While doing that, they work closely with the Story Group to make sure the stories are authentically Star Wars (for example, Darth Vader doesn’t dance or something) and also fit into the larger plan. Hidalgo said they’ve heard pitches from people who have great ideas for characters who are then told, “Come back in six years.” That’s because the story they’re pitching would fit in better with a character at another point in the future. 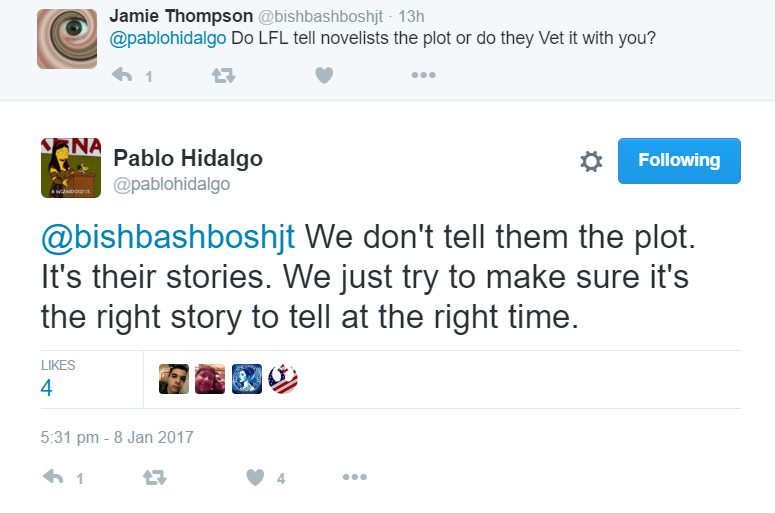 @bishbashboshjt Do LFL tell novelists the plot or do they Vet it with you?

@pablohidalgo We don't tell them the plot. It's their stories. We just try to make sure it's the right story to tell at the right time.

Although the LSG has a long-term plan for how the Star Wars universe will unfold, the fine details are left in the hands of the individual creators (in close consultation with the LSG, to keep the canon consistent).

Disney announced this via StarWars.com some time ago.

The Lucasfilm Story Group, created by Kathleen Kennedy, oversees all aspects of creativity and story telling within the Star Wars universe.

This allows the story group to maintain a cohesive canon universe across multiple mediums.

Now, with an exciting future filled with new cinematic installments of Star Wars, all aspects of Star Wars storytelling moving forward will be connected. Under Lucasfilm President Kathleen Kennedy’s direction, the company for the first time ever has formed a story group to oversee and coordinate all Star Wars creative development.

“We have an unprecedented slate of new Star Wars entertainment on the horizon,” said Kennedy. “We’re set to bring Star Wars back to the big screen, and continue the adventure through games, books, comics, and new formats that are just emerging. This future of interconnected storytelling will allow fans to explore this galaxy in deeper ways than ever before.”

Not the answer you're looking for? Browse other questions tagged star-wars canon disney or ask your own question.

24
Is there an explicit canon answer for the exact speed of blaster bolts in Star Wars?
5
How aware were the makers of The Force Awakens of Legends/EU Canon?
40
Is there really “No Underwear In Space?”
28
Why does Darth Vader opt to physically strangle Captain Antilles at the beginning of “Star Wars” (1977) instead of “Force Choking” him?
55
Was George Lucas involved with Rogue One?
19
What prop was inserted into Rogue One because of George Lucas?
8
Is there an in-universe reason how Princess Leia kept herself and her hair so tightly groomed during the events of the Star Wars movies?
39
When was Rey’s lineage decided?